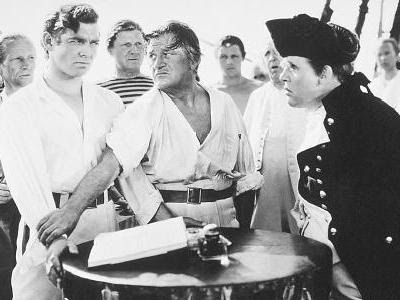 Mutiny on the Bounty is a great swashbuckling adventure made all the more compelling because it is based on historical fact. Frank Lloyd’s 1935 version was not the first and certainly not the last, but it’s probably the best and most fondly remembered. Starring Clark Gable and the great Charles Laughton, this story is not just a battle of wills, but a story of class, duty, and morality.

Gable stars as Fletcher Christian and Laughton as William Bligh, captain of the Bounty, whose methods make many enemies amongst the members of the crew. Bligh is cruel and sometimes unreasonable – in an early scene he orders the whipping of a sailor and then insists that the order be carried out even after learning that the sailor is dead – but the screenplay (written by Talbot Jennings, Jules Furthman, and Carey Wilson) does something important that helps inform the way we see the character and gives Laughton the foundation to make him more than simply a cardboard villain. Class is a big issue with Bligh, who worked his way up to his position the hard way. When Fletcher joins the crew of the Bounty, Bligh expresses his appreciation for having a gentleman sailor aboard and they have a short conversation in which it becomes clear that Fletcher respects the captain’s authority, but doesn’t respect the captain himself, that he seems himself as socially better. There is a similar tenor to a scene at the end between Bligh and one of the judges at the mutineers’ trial. Bligh is respected for his professional accomplishments but he will never be accepted into the highest circle; he will never be one of them and so his cruelty can be seen, in a way, as a means of overcompensating for the fact that his authority on the ship is continuously undercut by the class hierarchies that inform life off the ship.

But that is not to excuse his actions or his often barbaric treatment of his crew. Eventually it becomes too much for Fletcher who joins the disgruntled members of the crew and leads them in a mutiny that results in Bligh and his supporters being set adrift on a longboat. The Midshipman Roger Byam (Franchot Tone) remains loyal to Bligh but is told there is no room on the boat and he, along with a few others, basically become hostages to Fletcher and the other mutineers. The Bounty returns to Tahiti and those aboard spend several years living there, during which time the friendship between Fletcher and Roger is repaired. Meanwhile, Bligh miraculously guides his crew to safety against all possible odds and back in England is put in charge of another ship, one he uses to return to Tahiti and hunt Fletcher down.

The story is constructed so that it has several peaks of high action connected by long valleys of quieter character development and interaction. This works well for the most part, though the sections detailing the idyllic island life as the Englishmen “go native” go on a bit longer than they really have to and of course open the door to some questionable noble savage style imagery. Though the film is based generally in historical events, it is not necessarily historically accurate. The ending, in which Fletcher and the other mutineers, along with their Tahitian families, set out to make a life for themselves on the Pitcairn islands, is underscored with a note of optimism even though the reality was much darker. In reality, the native Tahitians who joined the mutineers were essentially kidnapped and, once on Pitcairn, turned into slaves which eventually resulted in rebellion and the deaths of just about everyone who came to settle the island (including Fletcher Christian himself).

For their roles in the film Gable, Laughton and Tone all received nominations as Best Actor (the Supporting categories were not introduced until the following year), but Laughton’s is the only performance that truly stands out. Gable seems rather restrained here in a way that he’s not in his best performances (such as the previous year’s It Happened One Night, for which he won, or Gone with the Wind) and it’s somewhat jarring to hear Fletcher telling Roger about his upbringing in Cumberland when Gable speaks in his usual American Midwest accent (this might have been slightly less noticeable were it not for the fact that everyone else in the movie speaks with various kinds of English accents). All things told, I actually found the film more compelling when it focused on Bligh rather than during the segments dealing with Fletcher and the mutineers. Bligh is presented as a more complex character than I was expecting and though he’s certainly no hero, I don’t think that Fletcher is exactly presented as the hero either. Mutiny on the Bounty has a few minor flaws, but overall it’s a film that has held up pretty well thanks largely to the soundness of its construction and its multifaceted portrayal of Bligh.