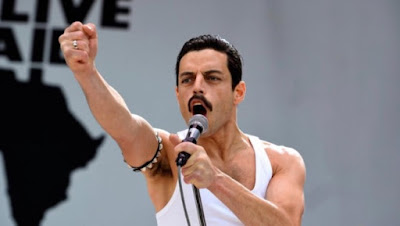 Early in Bohemian Rhapsody Freddie Mercury (Rami Malek) argues that Queen shouldn't be conventional, a moment that, even at that early stage in the narrative, is hilariously lacking in self-awareness given how conventional the film itself actually is. Yet as formulaic as the film's opening stretch is, by the time it reaches its conclusion Bohemian Rhapsody has managed to overcome its flaws (of which there are many on a basic storytelling level) to become something deeply moving. Maybe it's the music, so familiar, so catchy, so capable of amping a person up. Maybe it's the lead performance by Malek, which transcends mere imitation and hits on something intensely and beautifully true. Whatever it is, once Bohemian Rhapsody gets going it doesn't just take off, it soars.

The road to Bohemian Rhapsody was an arduous one. For the better part of a decade numerous directors, writers, and stars were attached and then dropped out of (or were dropped from) the project and even after production of the film finally got under way, it remained plagued by problems with some scenes being directed by the film's cinematographer Newton Thomas Siegel, credited director Bryan Singer being fired with two weeks remaining on principal production (for frequent absences from the set - though it's worth noting that those absences and the firing coincided with allegations of Singer's sexual predation), and Dexter Fletcher being brought in to finish directing the film. With all that being taken into consideration, it's amazing that Bohemian Rhapsody isn't a complete mess from start to finish, but it does get off to a rough start, adopting a narrative strategy of "this happened and then this happened and then this happened," hitting important moments but not necessarily building a narrative that actually feels like it's developing the characters and the story. Instead it feels like scenes dropped into the movie one after the other without any particular depth, nuance, or grace.

However, once the film gets past the opening stages and starts to settle into its characterization of its protagonist, it improves exponentially. It never shakes that "pause and wink" trap that biopics tend to fall into, where scenes are designed to name drop an event or thing that the audience will easily recognize and feel an instant connection to, scenes where you can practically hear a "Ding!" as it hits the mark (here the band is writing "We Will Rock You" Ding! Here the band is writing "Another One Bites the Dust" Ding!), but at a certain point that stops being a distraction. The film might not have the most elegant screenplay structure, but it quickly comes to excel in using Mercury to fashion an affecting portrait of loneliness. Early in the film Mercury meets and begins dating Mary Austin (Lucy Boynton), a relationship which is precious to him but ultimately at odds with his sexuality. They break up but he keeps her close to him, buying a house for himself and a flat next door for her to live in, ecstatic at the idea that he can look out his window and see into hers. Although he has wealth and fame, he has none of what he actually wants, which is the intimacy of sharing his life with someone. The loneliness encapsulated in that scene, during which he switches a light on and off and encourages Mary to do the same in her flat as if to confirm that not only does he see but is seen in return, is heartbreaking.

That desire to have someone - not to be with someone, but to have someone - emerges as the thread that pulls everything together. It informs so much of what the film shows of Mercury's life in the latter half of its story, as the other band members drift somewhat away, occupied with their partners and families, as Mary drifts away into a new romantic relationship, as the AIDS epidemic casts an even greater shadow on Mercury's sexual life than already existed as a result of bigotry and hatred, that it's little wonder that the Live Aid performance that comes at the film's end and which becomes its showcase sequence is so powerful. In that performance (which is, without question, one of the absolute best sequences in film this year) Mercury finds that connection. He calls to the audience and they answer him in many voices coming together as one. There's a give and take, a relationship, and for the duration of that performance they're everything to him and he's everything to them. If this sequence was the only good thing in the movie, the movie would be worth seeing for it alone because it's just that good.

Fortunately Bohemian Rhapsody has more to its credit than just that sequence, and more than just Malek's terrific, soulful performance. Many of its pleasures are superficial, found in the way the camera moves through certain scenes with a sensual grace, in the costume design, and, of course, in the musical performances. I think that even the most resistant audience member would be quickly won over as soon as one of those songs starts up (and then won over again with the next one and won over again with the next one... a Queen playlist is pretty stacked with awesomeness). Objectively speaking, Bohemian Rhapsody is not a great movie, but by the time you get to the end it feels like a great movie. Sometimes that's more than enough.
Posted by Norma Desmond at 8:00 AM