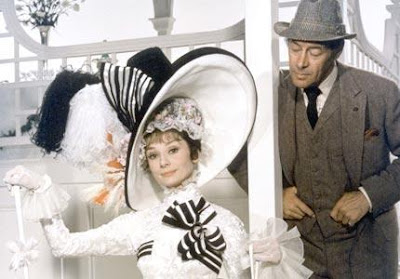 My Fair Lady is the kind of film many great directors make towards the end of their career, when their reputation is so well established that they can get away with big, self-indulgent projects. This adaptation of George Bernard Shaw’s Pygmalion is kind of fussy and a little longer than it has to be, but it does have a certain amount of charm – films by George Cukor or starring Audrey Hepburn have that tendency. So sit back, relax, and let Rex Harrison talk-sing his way into your heart.

This is the story of Henry Higgins (Harrison) and the bet he makes with Col. Hugh Pickering (Wilfrid Hyde-White) that he can teach any woman to speak “properly” enough to be passed off as an aristocrat at a ball. His project is Cockney flower seller Eliza Doolittle (Hepburn), who seems to be making little progress as she endures Higgins’ methods until one day she suddenly begins to speak with a posh accent. Higgins is thrilled and decides to test her ability by taking her to Ascot Racecourse, only to watch her slip into her regional dialect while cheering her horse during the race. Luckily Higgins dislikes the pretension of his peers so he finds her lapse rather funny.

At the ball Eliza is a success, even fooling the expert Zoltan Karpathy (Theodore Bikel), but the outcome ultimately sours the relationship between Eliza and Higgins because he gets all the credit and she gets none. Eliza leaves but finds that she no longer belongs in the world she grew up in and becomes engaged to Freddy Eynsford-Hill, whom she met at the races. When he learns of the engagement Higgins is incensed and then surprised because, as he realizes, he’s “grown accustomed to her face.” Fortunately for him, despite his being a grumpy, arrogant misogynist, Eliza has grown rather accustomed to his face as well.

On the film’s release critics were fairly divided about Hepburn’s portrayal of Eliza, but I’ve always thought that she does just fine here. It’s by no means my favourite of her performances, but I think that she more than holds her own against Harrison, who would go on to win an Oscar for this role. I don’t know if I really buy the pair as a romantic couple but, then again, Pygmalion playwright George Bernard Shaw never intended for Higgins and Eliza to have anything but a platonic relationship. The pair is rounded out by a terrific supporting cast, two of whom – Stanley Halloway and Gladys Cooper, playing Eliza’s father and Higgins’ mother, respectively – would receive Oscar nominations.

There is a lot of talent involved in My Fair Lady, both in front of and behind the camera, but it is a deeply flawed film. It doesn’t flow easily towards a narrative resolution and sometimes stops dead in order to show off the costumes or art direction. Those elements of the film are, admittedly, gorgeous but the intense emphasis on them makes it seem like the film is less interested in telling a story than it is in being an art installation or a celebration of hats. Everything in the film looks exquisite but it tends to get a bit caught up in admiring its own production, losing sight of the forest as it concentrates on the trees.

All that being said, the film is extremely charming, charming enough that it isn’t totally weighted down by its excesses. It fits in fairly easily amongst other films which won Best Picture during the same period, a period in which AMPAS seemed to love nothing more than to reward bigness. This was also the period in which the studio system was in the final phase of its decline and it would only be a couple of years after My Fair Lady’s win that AMPAS’s taste would begin to turn increasingly towards tighter, more socially conscious, auteur driven films. This is sort of like the last gasp of a dying era and, as far as that goes, this is a fairly elegant note to go out on.

I'm a bit jealous of your dedication. I myself have a bit of a hang up on Best Picture winners, especially before 1965.