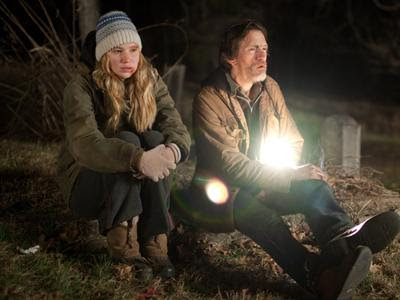 "I'll find him." It's a simple statement but the one that defines Winter's Bone and its heroine, Ree Dolly. With this one line Jennifer Lawrence expresses just about everything we need to know about Ree: her sense of responsibility, her cool-headedness, and, most importantly, her determination. "I'll find him" is not an empty statement coming from Ree. She really means it.

Though still only in high school, Ree has a maturity beyond her years thanks to the fact that she's essentially raising her two younger siblings on her own. Her mother has mentally checked out and is incapable of taking care of herself let alone anyone else, while her father is constantly on the wrong side of the law and is absent more often than present. When the sheriff shows up looking for him, Ree seems neither surprised nor particularly concerned; we sense that she has been in this position many times before. The difference, this time, is that the stakes are much higher, so high that she may not be able to keep the family from sinking into the abyss.

Ree is an unstoppable force who manages to find a way around every obstacle (which isn't always a good thing). She goes through the mountain community putting the pieces of the puzzle together, risking life and limb so that she can at least know that she has done everything in her power to keep her family together. This is a character built around a solid core of strength and Lawrence calibrates her performance to express that mental and emotional fortitude without making the character seem sanctimonious or judgmental. She does not partake in the drug culture that surrounds her but, despite the suggestion of her uncle, she does not act like she's better than anyone; rather, she simply acts like she wants more out of life - more for herself and more for her siblings.

Ree is a proud character - a lot of terrible things happen to her but not once does she ever start feeling sorry for herself; she's far too busy for that - and one with a strong sense of morality and values which she tries to pass on to her siblings. In the hands of a lesser actor, the lessons she attempts to impart might sound hollow - for example, when she cautions her brother to "Never ask for what ought to be offered" - but Lawrence so thoroughly naturalizes the dialogue that it never feels less than authentic. Not only does Lawrence have a firm handle on the dialogue, she more than holds her own against actors with decades more experience. Hers is easily one of the best performances by any actor in 2010 and in Winter's Bone she gives us one of the screen's most compelling heroes.