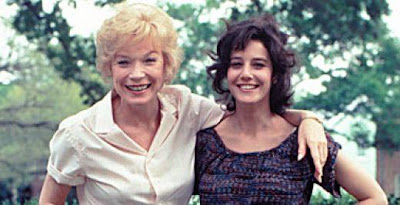 “I deserve this!” Shirley MacLaine proclaimed when she won the Best Actress Oscar for her performance in Terms of Endearment. She wasn’t wrong. Playing Aurora Greenway, she renders one of those force of nature performances that just make you sit back in awe. Her performance, and the film itself, sometimes threatens to go over the top and yet both manage to dance right up to the line and then pull back just in time.

Terms of Endearment is a family drama centering on the relationship between a mother, Aurora, and her daughter, Emma (Debra Winger). The relationship is a difficult one, in part because Aurora is a helicopter parent before such a term was invented (there’s an early scene when Aurora practically climbs into Emma’s crib to reassure herself that the child is alive and well). Once grown Emma marries the ridiculously named Flap Horton (Jeff Daniels), with whom she has three children, but the marriage is an unhappy one. Flap is a serial philanderer and Emma eventually has an affair of her own with a man named Sam Burns (John Lithgow). Finally, Emma leaves Flap and takes the children to live with Aurora, but this is only temporary. She goes back to Flap and agrees to move for the sake of his job, discovering later that he's uprooted the family in order to follow his mistress from one university to another.

While Emma is experiencing these upheavals, Aurora begins a relationship with her neighbour, astronaut Garret Breedlove (Jack Nicholson). Their relationship begins with hostility then evolves into hostility slightly tempered by sex (“You’re not fun by any chance, are you?” he asks on their first date), and ends once Emma and her brood move in, when Garrett does some soul searching and decides that he can’t handle Aurora’s baggage. Later Emma is diagnosed with terminal cancer, bringing the family together while also threatening to tear it irrevocably apart due to all the long-simmering tensions between its members.

Written by James L. Brooks and Larry McMurtry and directed by Brooks, Terms of Endearment is one of those films that can comfortably navigate its way from one extreme to another and back again. It is at times an incredibly funny film and at times intensely sad and it is wholly comfortable in both milieus. It touches a chord both with its humour and with pathos, constructing both around relationships that are complex and believable. Just as Aurora and Emma have a complicated relationship, so do Emma and her eldest son, Tommy. There is a scene at the end when a dying Emma tells Tommy, “I know you like me. I know it. For the last year or two you’ve been pretending like you hate me... You’re going to realize that you love me. And maybe you’re going to feel badly because you never told me. But don’t – I know that you love me.” It’s a powerful scene (amazingly played by Winger) that perfectly expresses the sentiments at the heart of the piece: sometimes the people you love inspire the worst in you and you treat them badly because you take them for granted. But, at the core, you do love them and they love you.

As I’ve already mentioned, MacLaine’s performance is great. She alternates easily between cool wit (to Garret after launching him out of his convertible and into the surf: “How are you? It’s not my fault but I’m sorry.”) and scenes of high tension (“Give my daughter the shot!”) and at once makes Aurora a nightmare and a compelling and ultimately rootable and kind of loveable character. Winger, who was also nominated as Best Actress, matches MacLaine step for step. The set of Terms of Endearment was notoriously explosive, with plenty tension between the two leading ladies, but onscreen those tensions channelled themselves into a dynamic that has a great deal of depth and propels the narrative forward. The cast is rounded out by a number of great supporting performances from Daniels and Lithgow as the men in Emma’s life, to Lisa Hart Caroll as Emma’s best friend Patsy, and especially Nicholson as Garret. Garret is one of those quintessentially Nicholson characters with a laid back charm and no shortage of women, but there’s also a sweetness to him that Aurora manages to bring to the surface. At the end of the film he reaches out to Tommy, who throughout the film seems to have absorbed so much of the tension being tossed around by the adults and whose needs have been consistently ignored, and it’s a moment of such easy niceness that even though the scene is profoundly sad (coming as it does at Emma’s funeral), it can also bring a smile to your face. Like the film itself, it strikes that perfect balance between tragedy and joy.