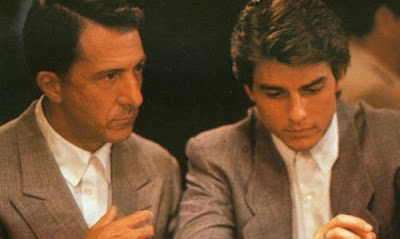 I must admit, I’m not a huge fan of Rain Man. I think it’s too slick, too shiny, too “Hollywood,” for me to really sink into it and invest myself in the story and characters. I can see the appeal, certainly, and I think that the film has moments of greatness but ultimately it has never really reached me on an emotional level. Plus, it bested the absolutely exquisite Dangerous Liaisons for Best Picture and, really, there’s just no forgiving that.

Rain Man begins as the story of a young hustler named Charlie Babbitt (Tom Cruise), who is one of those guys who can charm anyone, sell anything, take any shortcut, and is destined to become a master of the universe. When his father dies, Charlie is left nothing but a Buick Roadmaster and some prize rose bushes, while an undisclosed beneficiary receives a $3 million trust fund. Charlie does some investigating and learns that the beneficiary is Raymond (Dustin Hoffman), the brother he never knew he had. Raymond is autistic and has been living in an institution since Charlie was a kid, which throws Charlie for an even bigger loop.

Charlie takes Raymond out of the institution and embarks on a road trip with him to Los Angeles, where Charlie will meet with lawyers in the hopes of getting some of the money Raymond was left for himself. The trip is fraught with tension due to Charlie’s frustrations regarding Charlie’s limitations, and his behaviour towards his brother ultimately causes problems between him and his girlfriend (Valeria Golino). Eventually Charlie finds a way to turn Raymond’s peculiarities to his advantage, exploiting his brother’s photographic memory by having him count card in Las Vegas. However, though his initial instincts are to use Raymond to his advantage, Charlie does come to love him and, miracle of miracles, to put Raymond’s needs ahead of his own desires.

Hoffman won his second Best Actor Oscar for this film and delivers a very good performance that never crosses over the line and into parody. An actor could easily go over the top with a character like Raymond, playing the tics rather than the man, or slip into playing him in an overly technical way that suppresses the humanity at the character’s core. Hoffman doesn’t do either and, given how difficult it is for Raymond to communicate his feelings, it’s amazing how emotionally resonant the performance is. That being said, the unsung hero of the piece is Cruise. Charlie begins the film as the typical Cruisian golden boy charmer but gradually gains character as the story proceeds, discovering a capacity for kindness and compassion heretofore unknown. He holds his own with Hoffman, delivering an effective performance that nicely complements that of his co-star.

Written by Barry Morrow and Ronald Bass and directed by Barry Levinson (all of whom would win Oscars for this film), Rain Man is a film that is very aware of how to work the audience (the film itself has a bit in common with Charlie that way). It’s funny in an easy and kind of obvious way with much of the humour stemming from Raymond’s fixation on things like the “Who’s on First?” exchange, and Charlie’s irritation with those things. It also knows when to pull back from the humour, switching gears to provide the moving moments that set up the story’s heart warming conclusion. I’m not saying that any of this is necessarily bad - Rain Man hits all the notes you would expect it to hit, but it plays them with a fair amount of skill – just that I don’t find it to be terribly ambitious. No moulds are being broken here and there are no real surprises buried anywhere between the opening and closing credits, but Rain Man seems content to be what it is and within those limitations, it’s a success. It’s a solidly entertaining film, even if it falls short of greatness.