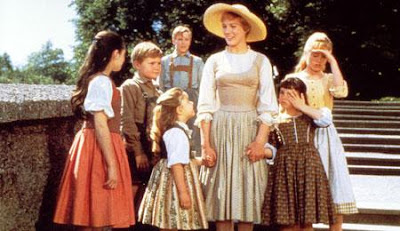 How do you solve a problem like Maria? Marry her off and make her someone’s mother, of course! That fixes all women! Just kidding (sort of). But I’m not here to speak ill of this beloved and very handsome adaptation of the stage musical from Rodgers and Hammerstein. Truth be told, seeing it for the first time just recently (yes, I know; how could I just now be seeing The Sound of Music?), I found it rather charming.

The film opens high atop the Austrian Alps, where the hills are alive and the cinematography by Ted D. McCord is beautiful. Maria (Julie Andrews), a would-be nun who is always, somehow, in trouble, is sent to the home of Captain Georg von Trapp (Christopher Plummer) to be the new governess for his seven children: Liesel (Charmain Carr), Friedrich (Nicholas Hammond), Louisa (Heather Menzies), Kurt (Duane Chase), Brigitta (Angela Cartwright), Marta (Debbie Turner), and Gretl (Kym Karath). Though the children have a history of running governesses off, Maria quickly manages to win them over, often doing so in ways that come into conflict with Captain von Trapp’s strict parenting.

Things begin to change when Captain von Trapp brings Baroness Elsa Schraeder (Eleanor Parker) to stay at the villa and she sees what is apparent to everyone except Maria and von Trapp: that they’re in love. Elsa manipulates Maria into returning to the convent, but she isn’t gone long before her Reverend Mother (Peggy Wood) encourages her to return and face her feelings head on. With Maria back, Elsa – who became engaged to von Trapp in Maria’s absence – accepts defeat and leaves, allowing Maria to marry von Trapp instead. While they’re away on their honeymoon Austria is annexed to Nazi Germany, setting in motion the events which will lead the family to flee into Switzerland.

Directed by Robert Wise, The Sound of Music is one of those exquisite productions that unfolds on a grand, sweeping scale. The opening scene, where Maria is revealed on the Alps singing the title song, perfectly sets us up for just how big the film is going to be. Nothing here is done by half measures; this is a big, big movie in absolutely every respect, but it’s big in the best way because Wise can handle bigness. Not a lot of directors can, but he can let the production blossom to its epic proportions without overpowering the narrative. Because Wise was so good at handling so many different genres – in addition to this film and West Side Story, he was also the director behind the submarine drama Run Silent, Run Deep, the science fiction classic The Day The Earth Stood Still, and the psychological horror film The Curse of the Cat People - and didn’t have a “signature” style, per say, he isn’t always given his due as a director but only someone with a great deal of skill could usher a project this grand from page to screen (or stage to screen, as it were).

Though the production values are magnificent, The Sound of Music ultimately owes much of its success to its star. Andrews makes Maria kind of heart without being sickly sweet, and the characterization is so full that the character works in both the lighter scenes and the more dramatic ones. She also has great chemistry with Plummer, who has a somewhat thankless role since there’s not really a ton to von Trapp. The actors playing the children, meanwhile, are as good as they need to be and with the focus so thoroughly on Maria, they never get the opportunity to be overly precocious.

All in all, while I don’t think there’s really a great deal of depth to The Sound of Music, I think it’s a great success as an entertainment. It’s colourful and lively and geared to making the audience happy, and though it isn’t particularly groundbreaking, it has a timeless quality to it that keeps it imminently watchable.