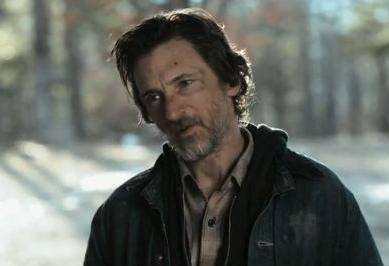 Prior to seeing Winter's Bone, my familiarity with John Hawkes as an actor was limited to his work on Deadwood. In fact, when Hawkes first showed up in Winter's Bone as Ree's drugged up and dangerous uncle Teardrop, my first thought was, "Oh, it's Saul from Deadwood." But then I thought that, no, I must be mistaken because while there was a resemblance, it was only passing and the deeper I got into Winter's Bone, the more convinced I became that this was a different actor. I guess that what I'm saying is that Hawkes is very talented and disappears so thoroughly into his roles that he's almost unrecognizable from one to another.

Teardrop's introduction into the story does not bode well for Ree. She comes to him looking for help or, at the very least, information about her missing father, and he essentially tells her to leave it alone. In fact, like pretty much everyone else in the story, he threatens to make her regret it if she keeps asking questions and then he sends her on her way. We assume that he'll be another obstacle in her journey, that he'll be one of the people who will cause her harm, but then the character takes a turn, channeling his fearsome energy towards the people who may be behind his brother's disappearance.

In a lesser film, this shift might not be wholly believable - we don't, after all, get to see Teardrop's change of heart since the film focuses so completely on Ree - but Hawkes and director Debra Granik make it work. You could write off the change as just part of the general unpredictability of a drug addict, but there's more to it than that. When push comes to shove, there is a deep seated sense of loyalty in Teardrop which drives him to come to Ree's rescue even after he's warned her to stop snooping around and which inspires his final lines in the film, wherein he tells her that it isn't quite over yet, that he's going to avenge his brother's death. When Teardrop shows up to save Ree from what seems like certain death, it's one of the most intense and frightening moments in the entire film. There is simply no telling what Teardrop will do (this sense of dread is echoed shortly after this scene, when the Sheriff pulls Teardrop and Ree over and it comes to a brief standoff) and though he's far outnumbered, everyone in the room seems wary of him. His whole bearing, meanwhile, suggests that they ought to be worried. His performance in this scene will have you holding your breath as you watch it unfold.

Teardrop is not a character prone to tenderness but there is a moment at the end when we see another side of him. In this scene we see the man he could be if it weren't for the impoverished, drug ravaged circumstances of his life; it is a brief moment of lightness soon shaded by the dark as he informs Ree that he knows who killed his brother. He doesn't have to say that he's going to kill that person, but we know just as well as he and Ree do that he will. He's very calm as he makes the statement, as if he's resigned to it rather than driven by it. It's one of the many things that makes him such a fascinating character, and Hawkes' performance is so compelling and so authentic that it's unforgettable. Hawkes isn't likely to win since the film itself is so small and little seen, but he would be totally deserving of taking home the prize. Hopefully the nomination will open up more opportunities for him because he's a really terrific actor.