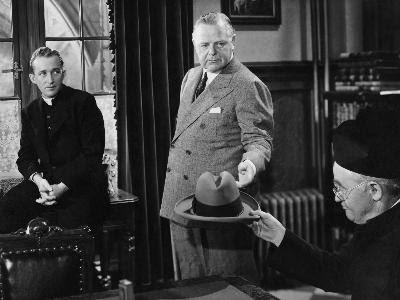 Sandwiched between 1943’s winner Casablanca and 1945’s winner The Lost Weekend, the earnest and light-hearted Going My Way looks slight in comparison. It’s a sweet movie that hits all the right emotional notes, though it seems quite dated today. Still, it’s a fairly entertaining film and ultimately quite moving – a good pick as Best Picture until you realize that it was nominated against Billy Wilder’s noir classic Double Indemnity and George Cukor’s psychological drama Gaslight.

Going My Way centers on life at Saint Dominic’s Parish in New York. Father Fitzgibbon (Barry Fitzgerald) has acted as pastor for many years but when a new curate, Father O’Malley (Bing Crosby) arrives, Fitzgibbon feels threatened, fearing that in his old age he’s about to be put out to pasture. The two priests clash over how best to minister to their parish (though “clash” is perhaps a strong word, given how gentle the film and its characters ultimately are) but over time they learn to work together for the benefit of their impoverished congregation.

Several other plot points weave their way into the story, expanding the narrative so that it doesn’t just concern the two priests, but becomes a story of the community generally. O’Malley gathers the neighbourhood gang of ruffians together to form a choir and mentors a runaway girl (Jean Heather) who wants to become a singer. He also reconnects with Genevieve Linden (Rise Stevens), a former sweetheart who is now an opera singer (as you might imagine, there is quite a bit of singing in the film) and writes a song which he hopes to sell in order to alleviate some of the financial strain on the church. Meanwhile, Fitzgibbon continues to worry that he’ll be replaced and falls ill. During his illness he reminisces with O’Malley about Ireland and his mother who is now 90, whom he hasn’t seen in decades. Fitzgibbon recovers and just as things seem to be settling down, a fire destroys part of the church, leaving all to wonder where it goes from here.

Going My Way takes an easy attitude towards its plot, drifting in and out of various moments, around its many characters, and sort of allowing things to come together in a very relaxed way. It really isn’t until the end of the film, when everything is brought together so perfectly, that you really realize just how much care has gone into the set-up. This is a very soundly constructed film that gives you plenty of time to get to know and become attached to the characters (though some might find the film a touch too slow) and it is ultimately a very charming picture.

Going My Way would be nominated for 10 Oscars and win 7. Interestingly, two of those nominations were for Fitzgerald, the only actor in Oscar history ever to be nominated as both Best Actor and Supporting Actor for the same role (he lost Best Actor to Crosby but took home Best Supporting Actor), leading a change in AMPAS’ nominating the rules. The following year the story continued in the sequel The Bells of St. Mary’s and Gene Kelly starred in a short-lived television adaptation in the 60s. It’s a story that obviously struck a fairly deep chord at the time, though it does feel rather old fashioned from today's perspective. Still, it’s an exceedingly pleasant film and I can see why the Academy would choose it over some of the more sharp edged nominees.
Posted by Norma Desmond at 4:00 PM