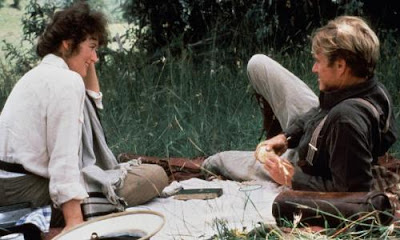 Out of Africa is the kind of sweeping epic that doesn’t get made much anymore (at least not well). It has prestige and – dare I say it? – class written all over it and manages somehow to overcome the burdens of a problematic genre to live up to its initial promise. There are reasons why I feel that I shouldn’t like this movie: the “other” culture seen through the eyes of a white protagonist, the white protagonist coded as good by being the sole champion of non-white peoples, and the trope “noble savage,” just to name a few. However, despite those elements, the movie really works for me and I adore it unabashedly.

The film is based on the life of Karen Blixen (Meryl Streep), who wrote under the pen name Isak Dinesen and was a member of the Danish aristocracy. After losing out on marrying the man that she really wanted, she settles for his brother, Bror (Klaus Maria Brandauer) and together they move to Kenya where they are set to run a plantation. The marriage is rocky from the beginning: Karen grows increasingly irritated as she watches her spendthrift husband blow through her money, make bad business decisions which leave the plantation haemorrhaging more money, and making little secret of the fact that he’s seeing other women behind her back. Karen makes the best of it, taking control of the management of the plantation and trying to salvage something from it, and making a real effort to make her marriage work. When it becomes clear that even the fact that he’s given her syphilis (which in turn renders her unable to bear children) won’t make Bror think twice about cheating, she finally calls an end to the marriage.

There are two other men who play important roles in Karen’s life: Farah (Malick Bowens), her servant and friend, and Denys, a British big game hunter who becomes Karen’s lover and is played by Robert Redford with absolutely no attempt at an accent (and, really, why would he? At that point in Redford’s career it would have been distracting to see him attempting an accent). Denys and Karen have an intense attraction to each other both physically and intellectually, but the relationship ultimately leaves both wanting. Karen wants some kind of commitment from Denys, wants, at least in this one way, to be like every other woman around her. Denys wants the freedom to come and go as he pleases, to be alone when he wants to be alone. Karen is more hurt by Denys’ desire to be alone than she ever was by Bror’s infidelities, and this incompatibility eventually drives them apart.

As played by Streep, Karen is a woman of considerable spirit, one who endures much but never succumbs to self-pity. She likes having a man around – first Bror, then Denys – but she shows time and again that she doesn’t need one because she’s more than capable of taking care of herself. She’s independent and able to pursue what she wants with an aggression that’s foreign to the women around her, which some find admirable and others find frustrating and, we can assume, unladylike; yet, at the same time, she longs to fit in through a traditional relationship. Redford is a good foil for her, playing a man who is only willing, or perhaps only capable, of giving so much of himself and their romantic chemistry is off the charts (if there was ever a sexier hair washing scene captured on film, I haven’t seen it).

Much of the film was shot on location in Kenya and director Sydney Pollack makes the most of the natural landscape. The film is beautifully photographed by David Watkin, who won the Oscar for Best Cinematography for his efforts, one of the seven that the film would ultimately take home. The production values of the film are top notch and it’s difficult to argue against the worthiness of those seven wins, even though that’s a sore spot for some because the year Out of Africa won is also the year that The Color Purple lost out in 11 categories. This fact has made Out of Africa’s Best Picture win somewhat controversial, which I think is unfair because it’s a really great and moving film. As far as I’m concerned, it’s one of the best Best Picture winners there is.

I totally love this movie. It is a recipe for overblown disaster but everything about it - the music, Meryl's performance, the scenery - is just so perfect and beautiful it's impossible not to love it.

Exactly! It's amazing how it can do so many things that I would hate in another movie, but make them work here.