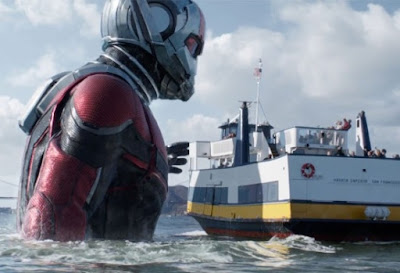 And so, after the impossibly high stakes of Avengers: Infinity War, Marvel dials things back ever so slightly with the sillier, lower stakes of Ant-Man and the Wasp. In a summer that has been pretty underwhelming so far (with the exception of Ocean's 8, Deadpool 2, and poor, unloved Solo: A Star Wars Story), Ant-Man and the Wasp is perfectly crafted for summer entertainment. It's fun, it's quick on its feet, and it's incredibly engaging. There are a number of things that you have to give Marvel credit for with respect to the success of its shared universe, and while the patience to build it one film at a time may be chief among them, the casting is surely a close second. Robert Downey, Jr. as Tony Stark, Chris Evans as Steve Rogers, Chris Hemsworth as Thor, Paul Rudd as Scott Lang - none of these choices would have seemed obvious from the jump (well... maybe Downey as Stark), but all of them now seem inspired. Thank God Rudd never ended up being snapped up to play any of the million other super heroes running around out there.

It's hard to believe that a comedy centering on a teenage sex pact and featuring a scene involving "butt chugging" - which I sincerely hope is not a real thing that people do, but I'm certainly not going to google it to find out - could be as sweet and insightful as Blockers. That's not to say that the film doesn't have its problems - there is an entire sequence which, in the wake of the "Me Too" movement, I'm surprised could make it into the final cut of a movie (and apparently having elicited no controversy, as far as I can tell) - but it's leagues better than most movies of its kind and it's terrifically funny, too.

File this one under "Movies You've Already Forgotten About, Even Though They Only Came Out A Few Months Ago," and with good reason. Tomb Raider is a forgettable adventure movie that forgets the key thing that tends to make adventure movies successful - it's not very much fun. This is a movie with a plot that centers on a giant tomb that is full of elaborate puzzles that need to be solved in order for the players to survive and it somehow manages to be mostly boring. It never had to be great, it never had to be groundbreaking, it didn't even need to stray too far from its video game origins, but it needed to be entertaining and, save for a moment or two scattered throughout, it fails. It is, at least, better than last year's tomb raiding movie The Mummy, but if you've seen The Mummy then you know that that's pretty faint praise.