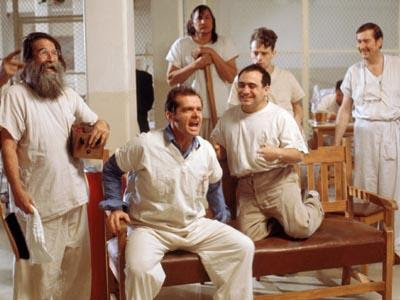 I always tend to think of One Flew Over The Cuckoo’s Nest as a comedy and it’s only upon reflection that I remember that it’s actually a drama in which some scenes play as comedy. The deftness with which it mixes comedy and drama is no doubt one of the reasons why it remains so well-loved and why its ending is still so devastating. Given the lighter-hearted moments of screw-you-rebelliousness from Randall McMurphy, the film seems to be moving on a trajectory towards a happier ending, and the fact that it doesn’t makes it all the more powerful.

Randall McMurphy (played marvellously by Jack Nicholson) is a convict faking mental illness in order to serve out his time in a mental hospital rather than prison. The hospital’s administrators are more or less on to him from the beginning, but let him play out his con nevertheless. He and the audience are then introduced to a group of colourful patients and, of course, Nurse Ratched (Louise Fletcher). McMurphy spends the rest of the film trying to teach his fellow patients to take charge of their lives and not be blindly submissive to authority, and going head-to-head with Nurse Ratched in one of the great film rivalries.

The comedy comes whenever the patients are all together, but this isn’t a movie that makes fun of mental illness, or that gets laughs at the expense of those who suffer. In its scenes of group therapy, it highlights the absurdity of putting together a group of people with different problems and different needs in terms of handling those problems, and providing all of them with the same treatment. When he arrives McMurphy essentially begins hijacking the therapy sessions in his ever-growing battle with Ratched, but it’s difficult not to be on his side. He’s usually standing up for the others in the face of rules that he believes to be unfair, imposed simply because the staff has the authority to impose them and because the patients are convinced that they have no choice but to accept them. The comedic highlight of the film comes when McMurphy, the only “sane” one, discovers during one of the sessions that he’s the only one actually committed to the hospital; the others are all there voluntarily. It is of course a commentary on larger socio-political issues that those who rebel against the dominant ideology are forced into submission – in McMurphy’s case it is first through confinement, then through drugs, then shock therapy, and finally a lobotomy which leaves him a vegetable – while the masses voluntarily submit to their own oppression and help the power structure remain intact.

Chief Bromden (Will Sampson), the silent giant of the film, represents the fear of the average person in going against the status quo. Assumed to be deaf and dumb by everyone else in the hospital, he eventually speaks to McMurphy, revealing that he, too, sees things for the way they are, but that he lacks the courage to go against it. “My pop was real big. He did like he pleased. That’s why everybody worked on him… I’m not saying they killed him. They just worked on him. The way they’re working on you,” he tells McMurphy. To rebel is to risk standing alone and having the world come down on you with full force. Chief knows this – he’s seen it happen – and so he’s resigned himself from the world, playing along in order to be left alone. But as the film and McMurphy’s schemes progress, he can no longer be content to stand idle, an observer rather than a participator in life. The film’s final and most powerful moments are so profound because McMurphy rebelled and failed, but his spirit inspired the Chief (“Now we can make it Mac; I feel as big as a damned mountain.”), who will succeed.

There are far too many great supporting performances to mention them all (though of all of them, I’ve always thought Sampson as the Chief is the best, expressing so much with so little dialogue), but it’s impossible not to talk about the performances by Nicholson and Fletcher, both of whom won Academy Awards for their performances. Nicholson has a nice, showy role but doesn’t overplay it and it isn’t until the film is over that you really realize how close he kept it from going over the top. Fletcher, too, walks a fine line, playing a character who is evil in the most reasonable of ways, a character who is of the firm conviction that what she’s doing is right, even when it seems cruel (as it does near the end, when it leads to Billy’s suicide). The key to both these characters is that neither one can just walk away from the other; both need to see this through until one is thoroughly defeated. McMurphy has lots of opportunities to escape, but somehow always fails to take them. Ratched has the chance to send McMurphy back to prison, but declines, insisting on keeping him in the institution. Ultimately, these two need each other, they need to fight each other and define themselves by this fight. And with two so finely matched competitors, you can’t help but have a show worth watching.