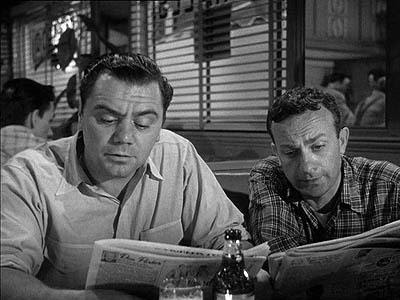 1955 saw the release of several hard-edged films that challenged contemporary mores – films like Rebel Without a Cause, The Blackboard Jungle, Kiss Me Deadly, The Man with the Golden Arm, and The Night of the Hunter, just to name a few – but the winner of that year’s Oscar was Marty, a decidedly gentle endeavour. Already having found success on television, the story was then adapted to film, where it would go on to capture the hearts of AMPAS and the jury at the Cannes and while it doesn’t stand out much when lined up against other Best Picture winners, it’s still a perfectly nice movie.

Marty is story about the lives and problems of ordinary people. Its protagonist is Marty Piletti (Ernest Borgnine), a butcher who, at 34, is still unmarried and lives with his mother (Esther Minciotti), who is constantly pressuring him to find a nice girl and settle down like his siblings have. Marty’s problem isn’t that he’s unwilling to get married and start a family, but rather that having faced a lifetime of rejection, he’s pretty much given up on the idea. He’s not the kind of guy women dream about and he’s come to terms with that. His family and friends, however, remain determined and after being pushed into going to the Stardust Ballroom one night he meets Clara (Betsy Blair), a kindred spirit with whom he might find love.

Rather than being happy for Marty, his friends and family undercut the new relationship. His mother, fearing that she’ll be left behind if Marty begins a new life with Clara, does everything she can to drive a wedge between them. Meanwhile, Marty’s shallow circle of friends ribs him about Clara’s plainness and encourages him to find someone better looking. Under attack from everyone around him, Marty gives in and decides not to call Clara after all. After finding himself right back at square one, however, Marty begins to rethink things, deciding that what really matters is what he and Clara feel for each other, not what anyone else thinks of them.

Marty has a very simple story and is told in a very simple way. It is satisfied to just explore these characters and their relationships in all their complexity. I highly doubt that a film like this could be made today because, aside from the fact that the plot necessitates that you’d have to cast actors with average looks, people would hear the plot and say, “That’s it?” But since director Delbert Mann and screenwriter Paddy Chayefsky handle it so well, it’s actually all that you need. This is a slice of life story that doesn’t require frills; such careful attention has been paid to the little details that you really don’t need to go any bigger.

As the eponymous character Borgnine delivers a very natural and very nuanced performance. Borgnine started his film career playing heavies in films like From Here to Eternity and Johnny Guitar (and, in the same year he played Marty, played one of the baddies in Bad Day At Black Rock) but he slips easily into this much warmer and much softer role. His scenes with Blair are especially touching as they play two lonely people finally forging a connection, and the actors complement each other nicely. Marty may not be the most exciting film ever to win Best Picture but it is a decidedly pleasant movie with a some truly wonderful performances at its core.

finally was able to catch it ,i think what may have touched the heart strings of ppl was that its simple story about simple ppl with their simple desires,nothing extraordinary or out of this world stuff ,there are billions who go thr their lives without ever finding love ,may be touched a core with all of them ,it was a big box office hit also and won cannes too


in general also ,ur choice of movies is good ,i have seen most of them ,keep writing