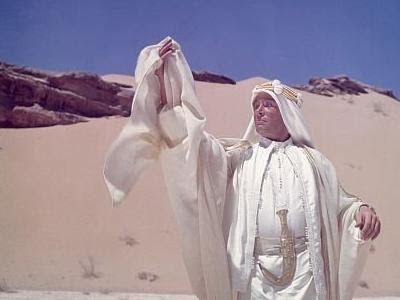 Lawrence of Arabia is a film that shouldn’t work according to any traditional understanding of what makes a movie “work.” It’s long, there’s no girl to diffuse the tensions between the male characters, and the hero is deeply flawed and sexually ambiguous. There’s also the fact that much of its plot centers on issues of Middle Eastern autonomy, and that a great deal of the film is comprised of long, lingering shots of the desert. And yet this is a film that absolutely works, a visually stunning, fascinating (if not necessarily historically accurate) portrait of a man who became a myth. A lot of films are tagged as epics, but this one dwarfs them all.

From the beginning, we’re made to understand that T.E. Lawrence (Peter O’Toole) is an unusual man, troublesome, difficult to manage, but also strangely alluring. Before he’s even done anything, you believe that he can accomplish the impossible because that’s the way that he carries himself. At the request of Mr. Dryden (Claude Raines), a British politician, he’s sent into the desert to assess the situation with Prince Feisal’s (Alec Guinness) army of Bedouins, whom the British army hope to absorb into their own ranks. However, it doesn’t take Lawrence long to come up with his own ideas for the Arabs and talks Feisal into lending him fifty of his men, including Sherif Ali (Omar Sharrif), to travel across the desert and take Aqaba back from the occupying Turks. When the mission proves to be successful, Lawrence is promoted in the British ranks and is allowed to wage guerrilla war on the Turks with his army of composed of various Arab tribes. By this point, Lawrence the man and Lawrence the myth begin to conflict, and he begins to unravel in the face of his findings about himself and his realization that the Arabs will never be given autonomy, no matter what they accomplish.

The primary theme of the film is identity (“Who are you?” is repeated throughout). Lawrence is British, though he doesn’t feel British, and can never really be Arab, even though he feels that he is one. Similarly, while he’s embraced by people on both sides, he’s not fully accepted by either side (towards the end of the film, Feisal and the British General Allenby (Jack Hawkins) agree that it is in the best interest of both sides for Lawrence to be removed from the debate). Ali argues that Lawrence can be whoever – and whatever – he wants to be because Lawrence is a man who seems to transcend any traditional understanding of what is or isn’t possible. For a time, Lawrence believes this, rejecting his British uniform in favour of traditional robes and immersing himself in desert life. “Nothing is written,” he states, meaning that neither fate nor identity is predetermined and that it is possible to be the author of your own story. However, following a brutal attack after he’s captured by Turks, he’s more aware than ever that the divisions he thought he had transcended do in fact still exist. He points to his skin, informing Ali that it can’t be changed and he becomes a shadow of himself, a deflated figure inside his larger than life persona. That he would come to this is perhaps inevitable. When he says “Nothing is written,” it is specifically in reference to his turning around and riding back through the desert to find a man who had fallen behind. Later, the man kills a member of a rival tribe and, to keep the peace, Lawrence must execute him. “It was written,” Auda (Anthony Quinn) states when he learns that the man had already been given up for dead before. He was destined to die, sooner or later, in one way or another and Lawrence can’t change that, just like he can’t change his skin.

At the beginning of the film, we see Lawrence burning himself, which can be seen as a literal attempt to change his skin. “The trick is not minding that it hurts,” he says, giving us our first hint at the film’s other big theme, Lawrence’s love/hate relationship with violence. Lawrence is initially depicted as someone who is sickened by violence. After he’s executed the man he once saved, he throws his pistol away in disgust and seems unable to cope with what he’s done. However, he later confesses to his superiors that his abhorrence of violence stems from the intense pleasure he gets from inflicting it (“There was something about it that I didn’t like… I enjoyed it”). He’s horrified by this aspect of his personality, which essentially takes over following his beating and implied rape by Turkish soldiers, when he leads his army on an attack of a Turkish camp. “Take no prisoners,” he says, even though many of the opposing soldiers are ready to give themselves up. They are, instead, slaughtered by Lawrence’s army to the disgust of Ali and the American reporter Bentley (Arthur Kennedy), and Lawrence himself, who knows that he is now too far gone to be of much use anymore in this campaign.

What director David Lean accomplishes with this film is astounding. Its running time is about three and a half hours, but the pacing is so perfect that it doesn’t feel longer than an average film. And the way that Lean depicts the desert is genius, showing it at various times to be heaven and hell, wide open and suffocatingly constricted, beautiful and ugly. It is hard to effectively describe the scope and breadth of a film like this, which is so massive in what it undertakes that there’s not really anything else to compare it to. This is filmmaking at its most monumental and breathtaking.