The Performances: Colin Firth in The King's Speech 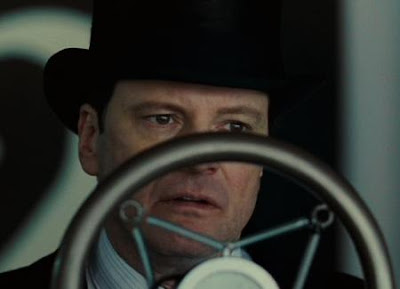 In The King's Speech Colin Firth has a difficult task. He must find a way to balance the sense of dignity inherent in someone of his character's status, while also making real the sense of humiliation and dread that character feels whenever he's called upon to serve his social function. He is a proud man betrayed by his own body, a person whose experiences as a royal are utterly unrelatable for most of us and, yet, whose struggles are made to seem familiar and compelling.

Playing King George VI presents a series of challenges for Firth. First there's the obvious physical challenge, which requires him to adopt a stuttering speech and make it seem natural rather than overly pronounced and showy. His pattern of speech works both because it's consistent throughout the film (he's never "cured" of his stutter, he just does exercises to suppress it) and because Firth's whole physical bearing expresses his deep frustration, disappointment and embarassment with himself whenever he falters over a word. His disability is more than just verbal; it affects his entire being.

But the performance requires more than just speaking with a stutter, as that is not the sum total of the character. In the scenes between Firth and Geoffrey Rush as the speech therapist Lionel Logue, a delicate balance must be struck. Bertie is a man who needs help but can't condescend to ask for it because of his position in the social hierarchy. Lionel holds the cards in the sense that he has the tools that can help Bertie, but there's only so much he can do without his client meeting him halfway. Despite being desperate to rid himself of his speech impediment, Bertie nevertheless remains cold and imposing towards Lionel for much of the film and, on a couple of occassions, is even cruel towards him. As we get to know Bertie it becomes clear that he holds Lionel at arm's length not only because of class difference between them, but also because his personal history has rendered him unable to trust others.

There is a very quiet and moving scene towards the middle of the film when Bertie finally begins to open up to Lionel, revealing some of the torments he endured as a child. It's a sad scene, for obvious reasons, but also a sweet one because while he's telling the story, he's sitting in Lionel's office putting the finishing touches on a model airplane. He seems so utterly normal in this scene, brought firmly down to earth from his high royal perch. It's scenes like this one that really brings out the greatness of the performance because it makes Bertie's personal experiences feel universal. Firth does not hit a false note at any point during The King's Speech, which is part of the reason why the great moment of triumph at the end of the film is so moving. We want him to succeed with the same degree of intensity and urgency that he wants it for himself; by opening up the character, Firth allows his triumph to be ours as well.

Wonderful insight. That scene you mentioned where he's talking while building a model airplane is one of my favorite scenes of the film. He's relaxed and is able to just talk without really doing anything showy.

That to me is his Oscar moment and he deserves to win. I like other performances but that scene exemplify why he is so good.

I also liked the part where he arrives at home and his daughters appear to him as they curtsy realizing he's now going to be king. The look on his face reveal a lot because of what's happening to him.

It's the little moments that stuck with me because he allows that character to be just like all of us. We feel for him because he's got an entire nation resting on his shoulders and having to speak to them. While to those little girls, he's just their father. Now, he's going to be more than that and we realize how hard it is for him to be content with this new role.

I really like what Firth did and I'm a fan of his work. I hope he continues to do great work in the coming years.

That scene with his daughters is great. There's this little pause he does after they curtsy where you can see that he suddenly gets a sense of how much greater the distance is between him and everyone else. It's a very bittersweet moment.