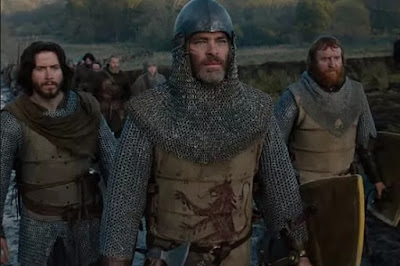 Generally speaking, when a movie premieres and the only thing people are discussing is the star's nude scene, that's a bad sign. It usually means that there's nothing else that's particularly interesting about the finished project, and when the critical reception is mixed (in the case of this film, to the tune of a 56 on Rotten Tomatoes and a 60 on Metacritic) that only reinforces that idea. In the case of Outlaw King, a historical drama about Robert the Bruce, the salacious bent of the coverage and the lack of enthusiasm from critics doesn't really do the film justice. As far as the much discussed nude scene goes, I doubt people would even give it a second thought if it had been done by an actor less famous than Chris Pine or an actress of any level of fame (and, in fact, Pine's co-star Florence Pugh also has a nude scene in the movie, and one in which the camera lingers on her nudity much more than it does on Pine, but female nudity is so de rigueur in film that it doesn't even seem noteworthy). As far as its poor critical reception, well, it's not a masterpiece but it's a perfectly serviceable movie of the "Important Man Did Important Thing" variety and shouldn't be written off as nothing more than Braveheart-lite.

Outlaw King begins with flair via a showy tracking shot that begins inside a tent where Robert Bruce (Pine) bends the knee to Edward I of England (Stephen Dillane) then walks outside where Edward's son, also Edward (Billy Howle), challenges him to a sword fight, which proceeds for a couple of minutes before Edward is called into the tent where his father tells him, essentially, to stop fucking around because it's embarrassing him, before going outside himself to show off his new siege weapon, launching a flaming boulder into the castle in the distance and then telling one of his underlings that now he can accept the surrender of the army garrisoned inside - he just didn't want to accept it until after he'd had a chance to use his new toy, since it was so expensive and took so long to make. As flamboyant as the sequence is - and, just in case you didn't register the technical prowess of the shot, the script has Edward I announce "We have a spectacle!" - it also serves to establish a few key things: Edward I is kind of a dick, his son is desperate for the approval of his father which he will never get, and Robert (who spends the sword fight alternating between swinging the sword and drinking) is sort of over it. Two of these things will remain true until the end of the film; the other will change over time.

After the death of his father (also named Robert), who had been the primary influence in Robert's decision to do homage to Edward I, Robert becomes head of the Bruce family and is in a position to begin planning a revolt against the English overlordship of Scotland. After murdering John Comyn (Callan Mulvey), his rival claimant to the Scottish throne, Robert is crowned King of Scots and begins his campaign to wrest his country from English rule, leading to a series of scenes bathed in blood and mud as swords clang, arrows fly, and men die agonizing deaths. Director David Mackenzie doesn't reinvent the wheel with the battle scenes and none of them particularly distinguish themselves from any of the thousands of similar scenes from countless medieval-set movies, but they're well done nevertheless. The CGI is unobtrusive and Mackenzie manages to simultaneously capture the chaos of the medieval melee while also providing a clear sense of where the characters are in relation to each other and how the battle is unfolding. It might not be anything new, but it's certainly never boring.

Like all historical stories, Outlaw King plays a bit fast and loose with the facts, sometimes for good reason, other times not so much. Robert's consort Elizabeth de Burgh (Pugh, bringing some spark and steeliness to the prototypical "woman behind the man" role) did not end up spending years in a wooden cage hung up outside a castle - her father was, after all, a friend of Edward I and a courtier powerful enough that Edward needed to maintain his support - after being captured by the English, but that was a fate that befell Robert's sister, Mary, and the decision to assign that fate to Elizabeth instead functions both as a means of consolidating events for a cleaner narrative with fewer characters to keep track of (you wouldn't know from the film that Robert even had sisters, since his family is shown as consisting only of his father, his brothers, and his daughter from his first marriage) and as a way to give some meat to the character. Less justifiable is the depiction of Edward I dying on campaign in Scotland and his son ordering that his body be dumped in a grave then and there, as if Edward I wasn't brought back to London and laid to rest properly at Westminster Abbey - in a tomb that identifies him as "Hammer of the Scots," just to rub it in. Scenes like this only serve to further belabor the point that Edward II - a King who is seemingly more disliked in our time than he was in his own, and he was despised in his own time - sucks. While not succumbing to the overt homophobia of Braveheart's portrayal of him, Outlaw King nevertheless goes out of its way to characterize him as a sniveling fool, even going so far as to have him literally run crying from a battle at which, in real life, he was not even present.

Veracity aside, Outlaw King tells a solid and compelling story, depicting Robert the Bruce as a man willing to sacrifice everything for his country and who perseveres even when it seems most hopeless. After being badly routed by the English he's left trying to recruit new troops, a hard enough task even before he has to admit to those he's trying to tempt to his side that he's down to an army of all of 40 men. Rather than give up, he decides to change his tactics, doing things that the English won't expect (such as burning down his own castles just to keep them out of English hands), and turning his intimate knowledge of the land to his advantage to lead the enemy army into a trap. Despite the character being a leader of men, Pine scales back his usual charisma, turning in a performance that involves a lot of silent brooding, but it works. At one point a character asks him what kind of man he is and he responds that he's trying to be a good one - it's that sense of conflict over wanting to be good but having to do terrible things to get there, that Pine gets across and it's the engine that ultimately drives the movie.
Posted by Norma Desmond at 8:00 AM