The Performances: Amy Adams in The Fighter 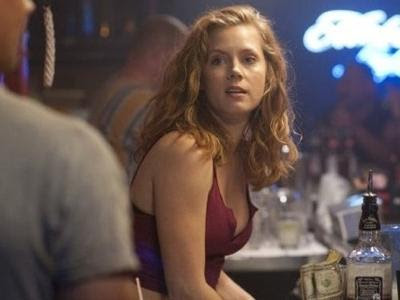 Amy Adams is well known for playing plucky heroines, good girls with soft natures. Her previous two Oscar nominations - for Junebug and Doubt - were both received for playing just that type of character, which is one of the reasons why her performance in The Fighter is such a nice surprise. She really plays against type here as the tough, foul mouthed Charlene and she's able to leave an impression even while playing against the wildly colorful characters played by Christian Bale and Melissa Leo.

There are plenty of parallels that can be drawn between The Fighter and Rocky but one thing's for sure: Charlene is not an Adrian-style shrinking violet. She's developed a pretty thick skin, partly from working as a bartender, partly from living in rough and tumble Lowell. She's very direct about who she is - including her shortcomings - and she's a straight shooter, which is why she's such a good match for Mickey. She's free of the bullshit that Mickey has to deal with from the members of his family, and she's actually supportive of him rather than using him as a means for personal gain.

When Mickey gets involved with Charlene, lines are immediately drawn in the sand. Before even meeting her, Mickey's mother and his army of sisters have decided that they don't like her, that she's a snob who think she's better than them, that she's trying to take Mickey away. When Mickey brings her over to meet the family, his mother greets her with a chilly (and rather loaded), "I've heard a lot about you." Cool as a cucumber, Charlene replies, "I've heard a lot about you, too." And what, pray tell, is that supposed to mean? "It means exactly what it meant when you said it." For me, that was the most exquisite line reading in the entire film. Adams' tone and her body language during that exchange is just so perfect, expressing that fundamental fact about Charlene: she's not about to be run off; she's here to stay whether they like it or not.

Throughout the film Adams combats the more overt performances of Bale and Leo with something a little quieter. It's a risky proposition because with a lesser actor, the character would shrink into the background; but Adams is skilled enough that she doesn't get lost in all the hubbub. In all likelihood co-star Leo is going to nab Best Supporting Actress this year, but that's okay. Since her breakthrough performance in 2005's Junebug, Adams has steadily gained a reputation as a solid, subtle actress. Her performance as Charlene only helps that reputation grow and, there's no doubt in my mind, she's going to have other opportunities to take Oscar home.

hmmmm i wasn't as much of a fan of her performance as everyoe else apparently was. but i think she's a pretty solid actress, for sure.