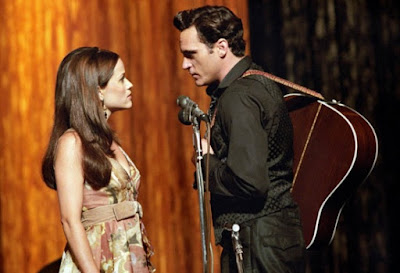 So, here's the thing. I don't think I've watched Walk the Line since it first came out 10 years ago, but in the years since seeing it for the first time then and rewatching it recently, I've seen Walk Hard: The Dewey Cox Story a few times and, as it turns out, that has completely ruined me for this Johnny Cash biopic. Basically, every time Robert Patrick showed up as Cash's father, I half expected him to shout, "Wrong kid died!" (and I had completely forgotten how close he comes to actually saying that), and every time Ginnifer Goodwin showed up as Cash's first wife, I couldn't help but picture Kristin Wiig as the prototypical biopic "first wife" who stands in the way of her husband achieving his dreams and does nothing but complain and get angry. That's not really fair to Walk the Line, but it's certainly a testament to how thorough a parody Walk Hard really is.


The Story
Spanning from 1944 to 1968, Walk the Line charts the rise, fall, and rise again of music legend Johnny Cash (Joaquin Phoenix). Born into poverty as the son of an alcoholic sharecropper, Cash experiences tragedy before he's even out of adolescence, in the form of the death of his older brother, and spends his adult life trying to gain his father's approval and stick it to him for the fact that he's denigrated him his entire life. After stints in the army and as a door to door salesman, Cash makes a go of being a musician and finds success, but the price is a heavy one, resulting in drug addiction and the failure of his first marriage. Spiraling out of control, Cash is ultimately saved by the love of a good woman, his eventual second wife June Carter (Reese Witherspoon).


The View From 2005
The Good: "The picture captures the joy Carter and Cash took in performing, separately but especially together, and if Walk the Line is “only” a love story, it’s one that doesn’t deny the power of the connections that people can forge through music." - Stephanie Zacharek, Salon

The Bad: "But Walk The Line doesn't really live up to its best moments. Mangold frequently gets stuck in rambling, episodic biopic mode, and he tries to lurch out of the rut by digging up the juiciest incidents of Cash's early fame—most having to do with his drug addiction." - Noel Murray, AV Club


The View From 2015
One of the reasons why Walk Hard is so successful as a parody is that Walk the Line makes it so easy, unfolding its story as if the narrative has been shaped by a cookie cutter, starting with the protagonist at the end of the story, brooding wistfully and looking back on the life that has brought him to that point, touching on the childhood years where a formative tragedy took place, tracing his origins as an artist and dealing with the closest people around him not believing in him, finding success, starting to enjoy success a little too much in the form of drugs and groupies, almost destroying his career through drug addiction, and then pulling out of the nose dive and getting it together just in time to go on to enjoy his greatest successes. The bones of the story are so by the book that a screenwriter could plot it out in his or her sleep; almost every musical biopic to come out in the last 30 years tells this basic story with the finer details changed according to the subject.

Where Walk the Line attempts to do something at least a little bit different is in how it ends up framing its narrative as a love story, bringing June in from the margins of the story (she's referenced during the scenes of Cash's childhood, as he and his brother listen to her performing on the radio) and making her a central part of it by the end. This works in some ways and not in others, as to tell the story that way necessitates creating a contrast between June and Cash's first wife Vivian that leaves the latter coming off somewhat shrewish, having never truly believed in Cash, and being generally unsupportive of his career. This is convenient way of framing things, particularly given how beloved the image of Johnny Cash and June Carter were in pop culture at the time the film came out, but it doesn't feel particularly fair. It feels like the easy way to write Cash out of his first marriage and into his second, giving all the complexity to the relationship between John and June, and affording almost none to the relationship between John and Vivian. Yet, at the same time, that central relationship is brought so beautifully to life by Phoenix and Witherspoon that it's hard to argue against it.

It's those two performances which really raise Walk the Line from being just another a rote musical biopic. Witherspoon would win an Oscar for her performance as June, a depiction in which she realizes the character as being wise beyond her years in the way that someone who has been in show business since early childhood and learned how to read people by learning how to read a crowd might be, a calm center around which Phoenix's more volatile Cash spins until finally she goes to him and makes him slow down. For his part, Phoenix plays Cash as a man deeply wounded by the events of his childhood and relationship with his father, seeking perhaps to prove his old man right by attaining success and then dismantling it by his own self-destructive hand. It's a deeply-felt depiction of a troubled man who surrenders to his demons and then lives to tell the tale, and Phoenix never lets it become a mere biopic cliche. Ten years on, the performances still stand strong and keep Walk the Line an easy and engaging film to watch, despite the narrative flaws that made it such a ripe target for parody.
Posted by Norma Desmond at 8:24 PM