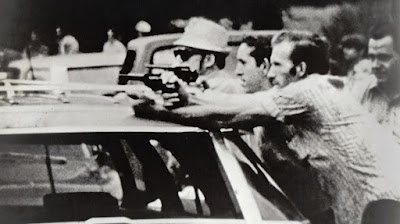 Everything you need to know about the situation in Harlan County, USA, Barbara Kopple's Oscar winning documentary about striking coal miners in Kentucky, can be summed up in the words of Norman Yarborough, then President of Eastover Mining, when asked about the living conditions of the miners, who live in company housing with no water and no electricity: "We were attempting to move our people - and these are our people, they're my people - to move our people, to upgrade our people into trailers, upgrade our people into better housing, better conditions because it will make us better people when we are able to do this." These aren't the words of an employer; they're the words of an owner in a slavery system or a lord in a feudal system, words of oppression disguised as words of benevolence. It was a situation bound to explode sooner or later and it did, right in front of Kopple's camera, which not only captures the violence but also became a target of it in this powerful, sometimes horrifying, documentary.

In recounting the 1972/73 strike of miners at the Brookside Mine in Harlan County, Kentucky, Kopple weaves together several different but related threads. One is the razor sharp divide between rich and poor in Harlan County, in which the executive class who live comfortably on the mine's profits have a vested interest in maintaining the status quo which limits the wages and benefits of the workers so that the profit margin remains high, and have the law in their pocket in order to restrict the effectiveness of the strike, and where the working class live in what can generously be described as a shanty town without water or power, forced to bathe their children in rain water collected in buckets, unable to drag themselves out of poverty because working in the mine in the only viable career option but it means being worked basically to death either by succumbing to "black lung" or being otherwise crippled. Another is the violence surrounding the strike action, with the company hiring "gun thugs" to break the strike, a mild moniker given that late in the film these men are actually captured on film opening fire at picketers and given that a deal will finally be reached after a young miner is murdered with a shotgun blast to the head. Another is the impact of the miners' wives on the strike, with the women proving to be some of the most fearless and dedicated demonstrators involved in the strike.

Harlan County, USA isn't a film that makes any attempt to hide its allegiance, as Kopple aligns herself very clearly with the strikers, though one would be hard pressed to see how she could have aligned herself any other way. The other side is, at best, destructively greedy and at worst downright evil, and even those parties who ought to be neutral (like, say, the police) are anything but. There's no more shocking scene in the film than the one in which the strike breakers open fire on the picketers, Kopple's camera catching flashes of gunfire breaking the pre-dawn blackness and then getting a clear shot of one of the gunmen pointing his weapon out of his truck window, but there's another scene (involving that same gunman, incidentally) that's just as illustrative of the strike opposition's power and wanton disregard not just for the lives of the strikers, but for any sense of fairness in the fight. The strikers' wives have parked a car in the middle of the road in order to block passage to the mine and the sheriff comes along to demand that they move it. After some back and forth, the women reveal that there's a warrant out for the most aggressive of the strike breakers and give a copy to the sheriff, demanding an arrest. The sheriff agrees to take action but tells the women it'll cost then $7 (for him to, you know, do his job), which they pony up only for the sheriff to not arrest the man anyway. The strikers and their families weren't just up against a powerful corporation, but an entire political system geared towards grinding them down and keeping them under the boot.

There's an intimacy to the way that Harlan County, USA unfolds that makes even more powerful than it could be just on the strength of its already compelling story. The people of Harlan County don't just allow Kopple to film their efforts to change their circumstances, they let her into their homes and their lives, allow her to capture the human toll of blind capitalism. It's territory that Kopple would cover again in the 1990 film American Dream (which also claimed the Oscar for Best Documentary Feature), which can perhaps be seen as the nasty coda to the small victory won by the miners in Kentucky. In the end, they get a contract that seems to satisfy many of them (though one of the older miners has a brief exchange with Kopple in which he argues that the contract benefits the young guys just coming into the industry, but doesn't do much for him), but in the grand scheme of the survival of the working class, this was a victory before the crushing effects of the union busting Reagan administration. As a chronicle of events, Harlan County, USA is an important document of life in America, and as a film it is a vital piece of cinema history which remains powerful and engrossing.
Posted by Norma Desmond at 6:22 PM