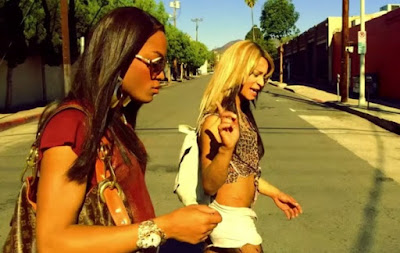 If the entirety of Sean S. Baker's Tangerine worked as well as its final, almost silent, scene it would be an unqualified masterpiece. That one scene displays so much empathy and understanding for its characters, such a rich and moving sense of camaraderie between them, that it absolutely makes the movie and prevents it from being reduced to a work most notable for its production gimmick (Tangerine was shot entirely on an iPhone). What comes before that final scene is a breakneck journey through Los Angeles over the course of Christmas Eve and while it's often exhilarating, sometimes funny, and definitely unlike anything else that's come out recently, it's a film that sweeps over you and doesn't really begin to attain power until those final moments of grace.

The film opens with Sin-Dee (Kitana Kiki Rodriguez) and Alexandra (Mya Taylor), two friends who are both transgender and work as prostitutes in the same area of Los Angeles. Sin-Dee has just finished a 28 day stint in prison and is shocked to learn that while she's been away her boyfriend/pimp, Chester, has been seeing another woman. Sin-Dee immediately sets off on an odyssey to find Chester and confront him and decides that she better find the other woman, a prostitute named Dinah, as well. Insisting that she wants no part in any drama, Alexandra bails once it becomes apparent that Sin-Dee is about to unleash a whirlwind of drama, but also because she's going to be singing in a club later that night and needs to get ready and finish handing out her flyers. So they go their separate ways, Sin-Dee in one direction, Alexandra in the other, planning to meet up again later for Alexandra's performance.

Sin-Dee manages to track down Dinah (Mickey O'Hagan) fairly quickly and then spends a not insignificant amount of time dragging her through the city by her hair so that she can bring her along to confront Chester. Alexandra, meanwhile, hooks up with a regular client, an Armenian cab driver named Razmik (Karren Karagulian), in order to make the cash she needs to pay for her performance venue. After dragging Dinah to the club so that she can be there to support Alexandra, Sin-Dee then brings both of them to a nearby donut shop where Chester (James Ransone) is known to conduct business, at which point things take a somewhat farcical and definitely chaotic turn as all the characters - including Razmik's irate mother-in-law and then later his wife - converge in the shop. But the comedy is only a prelude to the piercing drama still to come as Sin-Dee finds her first betrayal compounded by another, arguably more hurtful, one.

While it's problematic that the filmmakers have taken two characters who are black and transgender and made them prostitutes - not because that isn't a reality, but because it's often the only reality depicted in pop culture - the film can at least be commended for casting actual trans actresses to play Sin-Dee and Alexandra, as well as for the amount of compassion it has in its depiction of them. A lot of what happens in Tangerine is pitched as comedy, but the film doesn't make the jokes at Sin-Dee and Alexandra's expense and it never loses sight of the fact that they are real people rather than "curiosities." Their circumstances may be dire, marked by poverty and exploitation, and their behavior isn't necessarily always commendable (this is more true of Sin-Dee than Alexandra), but they aren't defined solely by their occupation or their gender status. They are people with hopes and dreams, people with feelings and humanity, and the film attempts to present them as more than just stereotypes even if the story's premise is itself built on some stereotypical ideas.

The measure of how well the relationship between the characters is drawn is in the impact of its finale. Up until this point, the film has treated Sin-Dee and Alexandra as two people who are comfortable with themselves in their familiar surroundings, accepted for who they are by those they encounter, and not necessarily existing in fear of being attacked (at one point Alexandra gets into an altercation with a John, but the film presents her as having the physical upper hand). In the end the film pulls the rug out from the false sense of security it's been able to build, leading to one of the women being subjected to an assault and then to the simple act of kindness that occurs at the close. The urgency and intimacy with which the film unfolds - as mentioned, the film was shot on an iPhone, which manages to give it a feeling of immediacy without in any way detracting from the quality - makes these moments all the more visceral. That final scene is one of the best of the year, though on the whole I found Tangerine to be good, not great, notable more for the groundbreaking aspects of its production rather than for its actual content.
Posted by Norma Desmond at 8:00 AM

yes, i commend that they cast actual trans women in the roles, but that did nothing to elevate the quality of the film. i hope they get a chance for better roles soon.