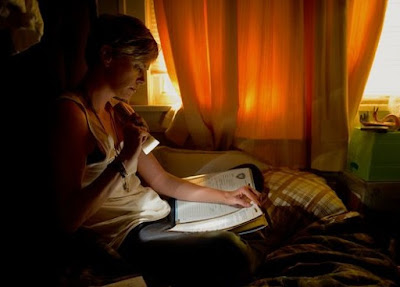 10 months before Dark Places briefly appeared in theaters, the first adaptation of a Gillian Flynn novel hit theaters to acclaim and a healthy box office take. 3 months before Dark Place's release, a film starring Charlize Theron and Nicholas Hoult hit theaters to acclaim and a healthy box office take. Although Dark Places isn't even half as good as Gone Girl or Mad Max: Fury Road, I find it hard to believe that the distributor, small though it may be, couldn't have capitalized on those films enough to push it to a box office take of more than $208,588. I'm not arguing that it deserves to have made more money than that since it's not very good, I'm just surprised that affection for those other films couldn't have gotten it some curiosity box office at the very least.

Theron stars as Libby Day, the sole survivor of a massacre that claimed the lives of her mother, Patty (Christina Hendricks) and two older sisters in the early 1980s. As the only living witness, her testimony proved essential to the conviction of her older brother, Ben (Corey Stoll), whom prosecutors theorized killed the family as part of a Satanic cult ritual. In the decades since the trial she has been living off of a trust fund established with money donated to her by strangers moved by her plight, but now the money is all but gone. Having relied on the money to always be there and more to always be coming in, she's done nothing to make herself self-sufficient or employable and is now in dire straights, months behind on rent in a place that has become less a home and more of a hoarder's stash. When she receives a letter offering her a business proposition, she's curious enough to agree to meet its writer, Lyle Wirth (Nicholas Hoult), who explains to her that he's a member of an amateur investigators group who would be willing to pay her to come and speak with them and let them ask her questions about the night of the murders. Needing the money, she agrees.

When she gets to the gathering place, she's shocked to learn that everyone in the group believes that Ben was wrongly convicted and that she lied about what she saw that night. Everyone has a different theory about who actually did commit the murders, but all are in agreement that a great miscarriage of justice, spurred by the Satanic cult panic of the 1980s, has occurred and they urge Libby to recant her testimony so that Ben can be given a new trial. Libby bristles at the suggestion that she falsely accused her own brother of the crime, and points out that Ben has never even bothered to appeal his conviction, but the group remains convinced that the case just doesn't add up. It's only after Lyle offers her more money that she agrees to go visit Ben in prison, the first time she'll see him since the trial, and though Ben is relieved to finally see her, Libby can treat him with nothing but hostility. She's resistant to what he has to say, but when she begins reviewing the materials that Lyle has gathered she starts to realize that she never knew as much about the case as she thought she did and, with Lyle's help, she begins tracking down the many loose ends of the story, hoping it will lead her to the truth.

Written and directed by Gilles Paquet-Brenner, Dark Places is told through multiple narrative threads. The first takes place during the present day, as Libby follows the leads presented by the evidence and tracks down the people who used to know Ben and may have information about that night, including a woman (Drea de Matteo) who, when she was 12 and just before the murders took place, accused Ben of having molested her. The other threads are flashbacks, one flowing specifically from the perspective of 15 year old Ben (Tye Sheridan), who was at the time involved with a troubled rich girl (Chloe Grace Moretz) who has some questionable associates, including a bookie who has been trying to collect a debt from Runner Day (Sean Bridgers), Libby and Ben's wayward and mentally troubled father; while another follows Patty as she struggles to support her four children and keep the family farm running, but can only descend deeper into hopeless poverty and feels increasingly like a failure as a person and, in particular, as a mother. Eventually all those threads come together, but it's at the moment that the mystery is finally solved that the film itself crumbles, the bottom falling out of a narrative which, while never extraordinary or particularly inventive to begin with, at least seemed competent up until that point (albeit overly reliant on voice-over narration and guided by the principal of "tell" rather than "show"). The resolution to the story only makes sense if you assume that the characters are aware that they are characters in a story and that they have to behave in ways that are unbelievable, self-defeating, or otherwise contrary to their own self interests in order to make the story work.

The characters don't fare much better than the narrative itself. Theron is an actress who isn't afraid to play an unlikable character and Libby presents her with an opportunity to dig deep and play someone who is paralyzed by grief and trauma and expresses that through belligerence, but the film is continuously getting in her way. Paquet-Brenner is either unwilling or unable to let Theron express anything with subtlety or simply through her performance, and instead insists on having her spell out every thought and feeling explicitly via the voice-over, which ironically just makes the character seem thinner rather than fleshing her out. Theron's performance is never bad, but the film definitely restricts her ability to do anything interesting with the character. The other actors don't fare much better - especially Stoll, who is stuck with a character who has, essentially, just layed down to die rather than do anything to get himself out of jail - though Hendricks is able to bring some genuine emotional grounding to her character in the flashbacks. All that said, Dark Places is not a terrible movie, and with a stronger director and a tighter script it might have been able to overcome the holes and implausibilities in its plot, but as it is it never becomes more than a run of the mill mystery thriller.
Posted by Norma Desmond at 8:00 AM