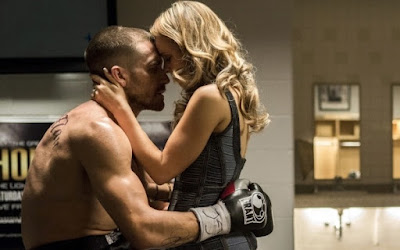 Intense and visceral and filled with an innate sense of urgency, boxing is a sport that translates easily to cinema, which is perhaps why it's one of the sports featured most often in Hollywood movies. It's an inherently filmable sport on a visual level, one which allows for the physical toll on the protagonist to always be made apparent, and which allows for the protagonist to always be seen, never getting obscured by a helmet or lost in the crowd of a team. It makes sense for filmmakers to be drawn to boxing, but at the same time the genre's tropes are by now so deeply entrenched that it's difficult to escape them and create a story that feels in any way fresh. Southpaw is, unfortunately, a pretty standard fall and rise, young hotshot and grizzled mentor, type of story that feels entirely derivative even when you factor in the family drama that's supposed to hold down the narrative's center. Its main character may be called "the Great Hope," but this movie is not.

Jake Gyllenhaal stars as Billy Hope, the undefeated champion of his division who rose from poverty alongside his wife, Maureen (Rachel McAdams), and now lives a life of luxury with her and their daughter, Leila (Oona Laurence), thanks to his success in the ring. After his latest win, he's challenged to a fight by up-and-comer Miguel Escobar (Miguel Gomez), but is discouraged from accepting the challenge by both his manager (50 Cent), who sees the greater chance for profit by setting up a fight with a more high profile fighter, and by Maureen, who wants Billy to retire while he still has some sense left in his head, reasoning that the way he's going, he'll be too punch-drunk to be much of a parent to Leila. When Escobar persists and attempts to publicly shame Billy into a fight, a confrontation ensues which results in Maureen being shot and dying and the very foundations of Billy's existence being ripped away.

Unable to cope in the wake of Maureen's death, Billy binges on drugs and alcohol and thoughts of taking revenge on the gunman who killed Maureen, eventually losing custody of Leila to the State and then learning that he's so deeply in debt that he's going to lose the house and everything in it. Having lost virtually everyone in his life and needing to get back into the ring to start earning money again, he enlists the help of Titus Wills (Forest Whitaker), an ex-boxer and current gym owner who used to train pro fighters but now only works with amateurs. Titus is resistant to the idea of training Billy, having his own demons to keep at bay and not wanting the pressure that comes along with training a professional boxer, but is eventually convinced to take Billy on as a project in order to help him get his daughter and his life back.

Written by Kurt Sutter and directed by Antoine Fuqua, Southpaw hits pretty much all of the expected beats of the boxing movie, including the fighter crashing and burning so that he can rise from the ashes, the trainer having a crisis of his own, the extended training montage, and the final fight where all seems lost only for the hero to pull through. There aren't a lot of surprises in the narrative, even when you factor in the drama regarding Billy and Leila, who begins to reject her father once she's taken into care and refuses to see him on their supervised visitation days, the film never manages to shake the feeling that it's telling you a story you've already heard a thousand times before. While Gyllenhaal's performance is definitely a work of pure commitment (as good an actress as she is, I didn't really buy McAdams as the tough girl from the wrong side of the tracks, the character's personality feeling like as much of a costume as the short dresses and long fake nails, but I did buy Gyllenhaal as the big-hearted meathead with more aggression than sense), as a character Billy isn't really any more compelling than any other boxer character you've ever seen in movies. He's lost everything but... they always do, don't they?

As redemption stories go, Southpaw is a little too blunt, a little too ham-fisted, and way too fond of expressing Billy's primal anguish via slowed down shots of him literally screaming in the ring, his over developed muscles straining and pulsating as he channels everything into aggression. It goes big in pretty much every respect, from the booming soundtrack down to the way that Billy feels every emotion with the force of a train smashing into a wall, but it doesn't ever slow down enough to actually develop any of the relationships that are supposedly at stake. Instead of being a transcendent work like Raging Bull, or even the kind of crowdpleaser that can elevate tired tropes simply by having a heart that can't be denied like Rocky, Southpaw is just a run of the mill boxing movie, going through the motions and keeping the genre warm until the next one comes along.
Posted by Norma Desmond at 8:00 AM