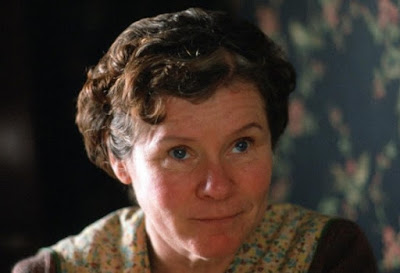 To watch a Mike Leigh film is to be dropped into such a completely realized, fully-fleshed out world that it's almost as if you're living the story alongside the characters rather than watching a film. This is especially true of Vera Drake, a film in which even minor, one scene characters are made to feel as though they have these entire lives that we're only seeing a little snippet of in medias res and that the film could, conceivably, follow any of them out of the scene and carry on with their story for the rest of the movie. But the story that Leigh wants to tell is that of Vera Drake, a woman who is described as having a "heart of gold" but whose inherent goodness and pureness of spirit does not rob her of complexity. Indeed, as depicted by Leigh and star Imelda Staunton, her goodness only makes her more complex and utterly compelling.

Set in 1950, Vera Drake is the story of its eponymous character (Staunton), a cheerful and big-hearted woman who works as a house cleaner and, in addition to that paid work and the domestic duties she undertakes to keep her household, which includes her husband Stanley (Phil Davis) and their grown children Ethel (Alex Kelly) and Sid (Daniel Mays), running, also works as a caretaker for her mother and some of her neighbors, popping in to check up on them and do some cooking or cleaning for them on her way home from work. Being useful makes her happy and she does all this with a smile, usually while humming to herself, driven to do it purely out of the goodness of her heart, which is the same spirit which prompts her to invite her lonely neighbor Reg (Eddie Marsan) to join her family for tea, and then gently nudge him and Ethel, who is as shy and awkward as Reg himself, together. Rounding out the Drake family are Stanley's brother, Frank (Adrian Scarborough) and his wife, Joyce (Heather Craney), a materialistic and selfish woman who is the polar opposite of Vera and whose demands for more and better things only seem to keep growing. For it's first third, Vera Drake plays out like a quiet domestic drama, a story of a happy middle aged couple waiting for the loved ones around them to settle into their own happy lives, but Vera has a secret which will soon derail the comfortable existence that she's built for herself and everyone around her.

For some time, Vera has been providing abortions for "girls in trouble" and her work in this respect is the axis upon which the rest of the film turns, with one of her clients having to be hospitalized afterwards and the police becoming involved. The fact that Vera has been doing this work is revealed gradually by Leigh, but ultimately explored at some length. The girls and women that Vera sees come in many different stripes, ages, and circumstances, with many different reasons for and attitudes about having turned to Vera for assistance. Some are scared, some are ashamed, some are flippant, some just want to get it over with and move on; one woman seeks her help because she's on her seventh pregnancy and can't afford to feed the six children she's already got, another has become pregnant by her lover while her husband has been out of the country, another is still only a teenager herself. What all of them have in common, however, is that they don't have the money to safely and legally circumvent the law, which prohibits abortion. Meanwhile, Susan (Sally Hawkins), the daughter of one of Vera's wealthy clients whose story unfolds concurrently with Vera's for the first half of the film, becomes pregnant after being raped and is later able to obtain an abortion from a doctor after being able to secure a referral from a psychiatrist. The only fundamental difference between Susan and the other women is money, as the latter has access resources and to the hundred guineas required to get the procedure from a qualified doctor, while the other women can only afford to scrape together the two guineas required to see Vera (who believes that she's doing the work for free because she would never dream of charging for it; the charges come from the woman who acts as the go-between connecting clients to Vera).

Abortion is obviously a hot button issue, but Vera Drake isn't an "issue" movie or even particularly political. It doesn't really take a stance on the issue of abortion itself (the film's sympathy is with Vera, but it also recognizes that what she's doing is dangerous with potentially lethal consequences), but rather on the ways that anti-abortion laws only serve to further disenfranchise poor women, as they don't actually do anything to prevent abortions - in this case, the rich woman is able to pay her way around the law, but in general it remains true that if a woman of means wants to terminate a pregnancy and lives in a country where it is illegal, she can simply travel to a country where it is legal, while a poor woman living in a country where it is illegal will, out of desperation, turn to the black market and put her life at risk in the process. If Vera Drake is political, it is so in the most matter-of-fact way, merely illustrating these facts through Vera's interactions with the various women she meets, and through Susan's story, and eschewing big speeches about the rightness or wrongness of the act of abortion. The closest it comes is the simple, quiet statement from Reg: "Me mum brought up six of us in two rooms. If you can't feed 'em, you can't love 'em, now can you?"

Vera Drake is such a deep and rich character film that you could excise everything having to do with Vera's secret work and replace it with more scenes involving the quiet examination of day to day life of a working class family in the 1950s and it would be still be a compelling piece of work, though it might not necessarily pack the same dramatic punch that the film has as it is because so much of its emotional impact comes from letting the audience get to know Vera and then watching helplessly as her life begins to unravel. Staunton's performance is a masterclass from beginning to end, a powerful depiction of a woman who wants to help people in need and struggles to reconcile her own idea of right and wrong with the law's definition of what is right and wrong. I'm a fan of Hilary Swank's performance in Million Dollar Baby, but the Academy Award voters got the Best Actress race that year so very, very wrong for passing over Staunton, whose performance seemed strong at the time and now seems in hindsight like one of the best performances of its decade, let alone its year. There is not a single false note, a single overplayed moment, anywhere in Staunton's performance. It is brilliant and the film around it is utterly engrossing. Mike Leigh is one of the best filmmakers working today and Vera Drake is one of his greatest accomplishments.
Posted by Norma Desmond at 8:00 AM