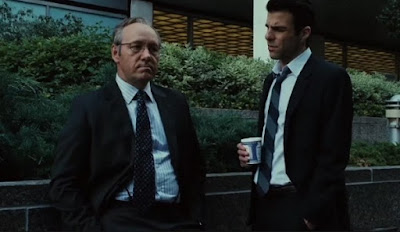 "It's just money; it's made up. Pieces of paper with pictures on it so we don't have to kill each other just to get something to eat." It's true to a point, society is built on constructs that exist because we've all agreed to recognize that they exist but, on the other hand, the notion that it's "just money" is a lot easier to take when no matter what happens you'll still end the day with over 7 figures to your name. For the ordinary people who have been sold a false bill of goods and are about to discover how unstable the house of cards they've been allowed to build really is, money isn't so much a concept as it is a matter of life and death. But J.C. Chandor's Margin Call isn't about the ordinary people, it's about the masters of the universe playing their games on Wall Street. It might just as well have been called "Sympathy for the Devil."

Margin Call takes place over the course of two days at a Wall Street investment bank, with the bulk of the action occurring between the end of one business day and the beginning of the next, as those in charge become aware that the business is riding the crest of a wave that is about to crash. The crisis is first discovered by Eric Dale (Stanley Tucci), but before he can finish putting his findings together, he's swept up in the mass layoffs that are taking place that day and his access to his work is cut off before he's unceremoniously ushered out of the building. Before he goes, however, he's able to pass his unfinished work onto Peter (Zachary Quinto), who along with Seth (Penn Badgley) make up what will remain of the firm's risk management team. After everyone else leaves for the day, Peter runs Eric's numbers and adds in the information that he sees is missing, and comes to a startling realization. He calls Seth and their new immediate superior, Will (Paul Bettany), back to the office to explain that according to the projections, the company is about to go under.

By 2 a.m., all of the company's major players have returned to the office to try to strategize a way to save the company: Sam (Kevin Spacey), who runs the trading floor, Jared (Simon Baker), who runs the division, Sarah (Demi Moore), the chief risk management officer, and eventually John Tuld (Jeremy Irons), the company's CEO. Together they all discuss the options, with Jared pushing the idea of simply liquidating all of their worthless holdings in one fell swoop in the hopes of getting out ahead of things. Sam argues against the plan, pointing out that doing what Jared is proposing will destroy the firm just as thoroughly as letting it sink under the weight of its bad holdings, as it will ruin the company's trading relationships with other companies, and word will start to spread fast once it becomes clear that they're selling off all of their holdings. Tuld, however, is ready to go through with it even if the economy could be tanked as a consequence. "If you're first out the door," he reasons, "that's not called panicking."

For a film that involves almost nothing but talking, and talking about complicated financial wrangling at that (there is literally a scene during which Stanley Tucci just does a bunch of math for several minutes), Margin Call is a surprisingly propulsive story, rushing from one scene to the next of people trying to problem solve, trying to get others on board with a plan which, even its proponents will admit, is not quite ideal and trying to figure out how to sell the plan to the traders who will be tasked, essentially, with spending a day selling themselves out of their jobs, trying to track down Eric Dale, who went missing following his firing and needs to be "contained" lest he let the cat out of the bag, and smoking. And smoking. And smoking. The characters smoke a lot, and the film itself feels like a smoker as, once it gets going, it has the bearing of someone jonesing for a cigarette, all tight tension and jittery anticipation, which helps it blast forward even as its dialogue turns to subjects which ought to slow the story down just by virtue of how complex and difficult to penetrate they are.

With an ensemble cast like the one assembled here, it's not surprising that Margin Call would be so riveting, but what is surprising is how sympathetic it's able to make some of the characters. Of all the people who suffered as a result of the 2008 financial crisis, the people who were working on Wall Street were the least of the victims, and the poorest person depicted in Margin Call is someone who makes a quarter of a million dollars a year, and yet the film does a good job at giving the impression that some of the characters were so focused on the trees that they didn't see the forest and how much damage they were doing (some of the characters; others are just straight up assholes who don't care about the damage as long as they can limit how much of it will blow back at them), and it does so even as it suggests that once the crisis is over, it's all just going to go back to business as usual, no real lessons learned. Since Margin Call, Chandor has found success with 2013's minimalist survival story All Is Lost and last year's crime drama A Most Violent Year, but his first feature is arguably his best, an amazingly assured and deeply compelling movie.
Posted by Norma Desmond at 8:00 AM