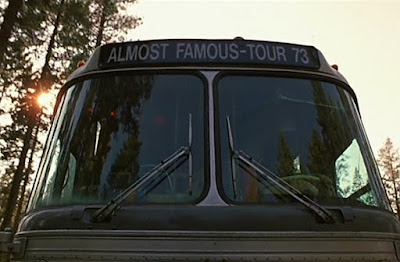 Few movies make it look quite as effortless as Cameron Crowe's Almost Famous, a film that manages to be sweet and earnest even as it sets itself firmly in some of the seedier aspects of the music industry, including a plot that hinges on some of the female characters being treated like chattel. That it can go to such dark places - and some of what happens in the movie is pretty dark - while maintaining its earnest and open-hearted manner, that it succeeds at being a feel good movie, is a testament to Crowe's deft touch as a storyteller and his ability to craft compelling characters (in this respect, he shares credit with the excellently assembled cast). 15 years ago, Almost Famous was not one of the year's biggest hits, earning little at the box office and receiving surprisingly few accolades (it received 4 Oscar nominations, including Best Original Screenplay for Crowe, but it failed to crack the Best Picture lineup, despite it being a relatively weak year for contenders); but 15 years later it's one of the more enduring films from the year 2000, a work that remains touching and entertaining in equal measure.

Based in part on Crowe's own experiences as a teenage Rolling Stone correspondent, Almost Famous is set in 1973 and follows 15 year old William Miller (Patrick Fugit), an aspiring music journalist who guilelessly charms his idol, Lester Bangs (Philip Seymour Hoffman), into giving him a writing assignment. Tasked to write about Black Sabbath, William instead ends up hanging out with the members of Stillwater - drummer Ed (John Fedevich), bass player Larry (Mark Kozelek), singer Jeff (Jason Lee), and Russell (Billy Crudup), the "guitarist with mystique" - who invite him to follow along on their next adventure, and the groupies who style themselves as "Band Aides" and are led by Penny Lane (Kate Hudson), Russell's sometimes lover. His writing having attracted the attention of Rolling Stone editor Ben Fong-Torres (Terry Chen), William is able to secure a commission to join Stillwater on tour and write about it for the magazine, though he first has to talk his mother (Frances McDormand) into letting it happen. While on tour, William's infatuation with Penny grows in direct proportion to his disillusionment with the band, and particularly Russell, who he comes to see as corrupted by the trappings of fame. In particular, he's appalled at the way that they treat their groupies as disposable commodities to be used when it's convenient and then traded away when that becomes convenient, with Penny being "exchanged" to another band for $50 and a case of beer so that Russell can be rid of her before his wife can join the tour. William begins the tour a starry-eyed fan, and he ends it weary and disenchanted - but, like Penny, he manages to remain unbroken by the experience of seeing his idols for who they really are.

As good as it ends up being, Almost Famous isn't a sure thing just looking at it on paper. It has the potential to be derivative of other road movies, coming of age movies, and back stage musical movies, and there are moments in the film which, if they weren't pitched exactly right, could have seemed unforgivably cheesy (the "Tiny Dancer" sing-along being one such moment, which instead works so perfectly that it ends up being one of the highlights of the film; that said, a few lines of dialogue are a little too on the nose to be anything but cheesy, such as the observation that Mick Jagger won't be up on stage at 50, or that the new invention, the fax machine, is so fast it transmits a page every 18 minutes). It also has the potential to be pretty problematic in terms of its major female character who, from a distance, appears to exist so that the men around her (including William) can project their desires onto her and use her to reflect back to themselves the self-image they want to attain, and whose stated purpose is to be the inspiration that allows a man to create his best work. But the film sees Penny in greater dimension than that and Hudson delivers a performance that makes Penny more than just the "good time" girl that she tries to pass herself off as. The moment when William reveals to her that Russell has traded her to another band is one of the more affecting scenes in the film, as Hudson allows Penny a flash of devastation at the realization that the man she loves is actually just like the rest of the guys on the scene and that he's treating her like she's just any girl on the scene, and then tries to play it cool with a joke. The character might seem shallow at first, but it's a deceptive pose that hides a character who is revealed to be a little more wounded but also more clear-sighted than she first appears. She has hopes for her relationship with Russell, but no delusions, as made evident in her observation that "maybe it is love... as much as it can be." Experience has brought her around to this vision of the person she loves that is not the ideal, but a compromised version of it, just as William will eventually be brought to a more nuanced view of Penny once he begins to let himself see who she really is and not just who he wants her to be.

At its core, Almost Famous is an inherently lovable movie, and one that's ultimately about loving someone, discovering their flaws, and then finding a way to keep loving them anyway, even if only from afar. William first loves the image of Penny and then comes to love the real her, the one who is a little bit sad and a little bit lost and tends to sell herself short in terms of her value; Penny loves the person that she sees Russell can be when they're alone, but has to come to terms with the fact that, in public, he cares much more about what people think of him than he otherwise claims and is deeply afraid of not being the guy people think he is; and in a different way, William and his sister love their mother, but have to accept the fact that she's overbearing and will never admit that she was wrong (and thank God, since her "I forgive you" to William's sister at the end is one of the funniest parts of the film). The characters feel deeply and with complexity, and the film feels deeply for them, which is one of the things that helps set Almost Famous apart from other films of its type. Another thing is how completely it draws the characters, taking them beyond archetype to make them affectingly human, an accomplishment shared by Crowe and the film's fantastic cast. Actors like McDormand, Hoffman, and Crudup are pretty sure bets, solid performers who are always good and are especially so here (though of the three only McDormand would net an Oscar nomination), while Fugit was a real find whose career didn't really take off the way it should have, and Hudson (nominated alongside McDormand) has never been better, bringing an effervescent quality to Penny that keeps the darker edges of her story from defining her. 15 years on, all those things that made Almost Famous so wonderful in the first place definitely endure, and though one might argue that it's a thematically lightweight movie, it's nevertheless a great one and one of the defining films of the 21st century so far.
Posted by Norma Desmond at 8:00 AM

This is my favorite movie! Great review! I especially loved your analysis of Kate Hudson's performance.

Thanks! To be honest, in my memory I had recalled Hudson's performance as a weak link, but on rewatching the film recently I saw a lot more in the performance than I had before.