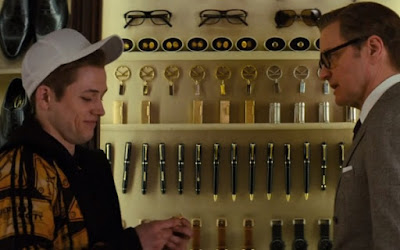 There's James Bond and there's Austin Powers and somewhere in between there's Kingsman: The Secret Service, suave as Bond but as in on the joke as Powers. If I'm being completely honest, Kingsman is a mixed bag of things that do and don't work, with violence so literally cartoonish that it becomes off-putting fairly quickly, but every time the film starts to veer off course it finds a way to pull you back in with its nonchallantly ironic humor. It helps to have a cool as a cucumber performance by Colin Firth front and center, with a so weird it works performance by Samuel L. Jackson standing beside it, as well as healthy doses of Mark Strong and Michael Caine; Kingsman has all these things and more, which is why it ends up more on the "good" side of the scale than the "bad."

Kingsman is a shadow organization, an independent intelligence agency tasked with swooping in to save the world before the world even realizes that it needs saving, and styled and organized according to the legends of King Arthur. The head of the organization is code-named Arthur (Michael Caine), the man tasked with training agents is Merlin (Mark Strong), and the agents themselves are named after the Knights of the Round Table. After one of the agents, Lancelot (Jack Davenport), is killed trying to rescue a professor (Mark Hamill), who later turns up alive but only until an implant in his neck is set off, exploding his head, the Kingsmen become aware that a large scale plot is under way by eccentric billionaire Richard Valentine (Samuel L. Jackson), who has just made free cell phones and internet available the world over as the first stage in his plan. As the agent code-named Galahad (Colin Firth) investigates, the agency seeks to fill the void left by Lancelot, which requires each of the remaining agents to select a recruit to undergo the agency's rigorous training program to see who is fit to don a Kingsman suit. Galahad's selection is Eggsy Unwin (Taron Egerton), the son of a former Kingsman who once saved his life, a kid from the wrong side of the tracks who doesn't exactly fit in with the other contenders, who come from rich, connected families.

Eggsy makes it to the final stage of training, alongside fellow recruit Roxy (Sophie Cookson), but whiffs on the final test, allowing Roxy to ascend to become the new Lancelot. In the meantime, Galahad has uncovered more about Valentine's plot, which involves saving the world by culling its most harmful species (humans), achieving that by activating a signal which will be transmitted through cell phones and cause everyone within range to hear it to become aggressive and lose impulse control and kill each other. After Valentine and his loyal and deadly henchman Gazelle (Sofia Boutella) test the technology out on a hate group based in Kentucky, they're ready to put it into effect globally and retreat to his mountain bunker, where they're joined by the world leaders who have decided to get onside with Valentine's plan, as well as other powerful people (and a few uncooperative celebrities that he wants to keep around and has locked up). With Galahad (and, apparently, the rest of the Kingsmen; if their absence is actually explained by the film, then I missed it) out of commission, it's up to Merlin, Lancelot, and Eggsy alone to foil the plot.

Based (very, very) loosely on the comic book The Secret Service, Kingsman is a film that doesn't take itself seriously at all. It is all wink, embracing the camp and excess of the spy movies of yore and taking a self-referential attitude that breaks down the fourth wall. As an action film, Kingsman is pretty generic, its action sequences distinguished only by how overtly fake it is (when heads explode because of the implants, they literally go up in a puff of brightly colored smoke). As a comedy, however, Kingsman is pretty winning, thanks in no small part to Jackson's off-the-wall performance as the exceedingly bizarre villain. Valentine isn't just a throwback to the kind of megalomaniacal, armed-bunker-built-into-a-mountain-having, seeking world domination style villain that inspired Dr. Evil, he's his own distinct creature not quite like any you've seen before. For one thing, he abhors violence and can't stand the sight of blood and the one time he actually directly kills someone, he feels super bad about it (whether this would be as hilarious as it is if the character was played by anyone other than Jackson is open for debate). For another, he seems to get that he's the bad guy in a movie and he's as excited by that as if he's watching it and participating in it at the same time. In what is, all around, a very fun movie, Jackson is easily the most fun part of it.

Kingsman is not a movie without some weaknesses on a story level (seriously, I know that at least one member of the agency was compromised by Valentine, but where were the rest of them when the world was about to end?; Why does it take so long for Merlin and Eggsy to remember what the implants are capable of doing to those who have them? What happened to Gazelle's implant?) and on the level of taste (staging a massacre scene inside of a church, even one that's home to a hate group that merely calls itself a church, would seem like a questionable decision to me even if it weren't for that fact that the sequence goes on forever, and the movie could have done without the finale gag with the Swedish Princess), but it's ultimately a work that coasts over its weak spots on the force of its sense of fun. Doubtless it's poised to become a franchise, and whether it can sustain its zany charm over multiple movies remains to be seen, but it's first entry at least is a good time.
Posted by Norma Desmond at 8:00 AM

I had a complete blast watching this. I loved just about every minute of it, especially the church scene. I was literally giddy watching it. The blatantly cartoonish look of the violence just added to the fun of it all. I will admit that you're right about there being a lot of plot holes. My worries for the franchise is that the best characters in the first movie won't be around for the sequel, Valentine and Gallahad.

From what I understand, they're looking to find a way to bring Colin Firth back for the sequel. Samuel L. Jackson's Valentine will still be sincerely missed, though.