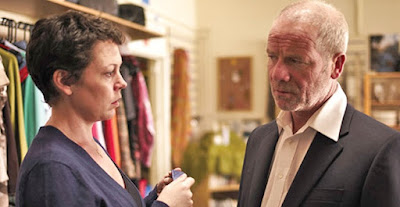 Kindness is a rare commodity in Tyrannosaur and even when it does appear, it is laced with the same violence that marks everything else. Written and directed by Paddy Considine, and based on his short film Dog Altogether, Tyrannosaur is an unrelentingly bleak film about broken people who know nothing but brutality. It's one of those rare films that is so absolutely excellent that you're glad to have seen it, but so incredibly depressing that you look forward to few things as much as never seeing it again (it's not quite the same combination of great and soul crushing as, say, The Road, but it's not that far off, either).

I'll just get this out of the way: Tyrannosaur opens with its protagonist, Joseph (Peter Mullan), drunkenly kicking his dog to death. Believe it or not, this isn't the worst thing that will happen through the course of the film (believe it or not, this isn't even the worst thing that will happen to a dog through the course of the film). Joseph immediately regrets what he's done - when drunk he's given to fits of violent rage and he had just come from the inside of a pub having had some kind of altercation with another patron - but that's not enough to save the dog, who dies the next day after having been carried home by Joseph. Joseph weeps over the loss but it doesn't keep him out of the pub, where a fight with some young men who mouth off to him leads to him fleeing and taking refuge inside a second hand store, where he meets the store's lone employee, Hannah (Olivia Colman). The next day he comes back and, though she treats him with nothing but kindness, he berates and mocks her before finally leaving.

Though Joseph sees himself as existing a world apart from Hannah, who lives in a posh area and is openly religious, they aren't actually as different as he would think. While he wears his alcoholism on his sleeve, her alcoholism is of a more secret and quiet variety, and while his drinking turns him into a whirlwind of violence capable of nearly anything, her drinking is a response to the violence she endures at home at the hands of her husband, James (Eddie Marsan). Hannah is drawn to Joseph despite his prickly nature - or, perhaps, because of it - but the friendship, once discovered by James, causes her situation at home to escalate. While she's fast approaching the breaking point in her marriage, Joseph is reaching a breaking point of his own, driven there by witnessing the abuse his young neighbor endures at the hands of his mother's boyfriend, who uses his dog to torment and frighten him.

Both Joseph and Hannah will eventually be driven to acts of desperate brutality, though Considine doesn't frame these acts as any kind of catharsis; these are just new layers of tragedy in lives which have become increasingly hopeless. This isn't to say that the film relishes the misery of it's characters, just that it's starkly matter of fact about how their lives have become stuck in a cycle of violence and despair that they can't seem to pull out of. For a while, it seems like Joseph and Hannah may become a couple as they share a brief interlude where they might escape the pain of their lives and forge something new, but while Hannah is content to delude herself so that she can just step out of her old life and into a new one, Joseph understands himself well enough to know that he isn't fit to be with anyone and that this situation is as much of a potential powder keg as any other relationship that either one of them has ever had.

Joseph and Hannah are both incredibly sad characters, each in their own way, but the performances by Mullan and Colman are fiercely compelling and emotionally brave. Playing Hannah requires Colman to undergo some pretty vicious indignities onscreen as the character hedges the amount of abuse she can take against the further abuse that would come her way were she to react to what is being done to her. Meanwhile, as Joseph, Mullen is playing a character defined by his duality, a man who can explode with rage at the slightest provocation one moment, and is overcome with guilt and despair the next. In introducing the character by showing him committing the heinous act of the film's opening scene, Considine lays down something of a challenge to the audience, but the film builds itself easily around Mullen's performance, which unfolds so effortlessly that you can't look away from it and you can't reduce the character down to one bad act (or multiple bad acts). Tyrannosaur is a difficult film, but it's also a rich and rewarding one.
Posted by Norma Desmond at 8:00 AM

I totally agree. I saw Tyrannosaur a couple of years ago and I named it my best film of the year. It's bleak, but so good. Both lead actors were fabulous.

It's a shame it was such a low profile film; it was certainly deserving of awards attention, especially for the actors.

Such a phenomenal film. It is my number one of the year it came out for all the reasons you give. For me, this is one of this century's essentials.

This is actually one of my favorite films (I know, I'm a sick individual, but whaddya gonna do?) I love Paddy Considine as an actor (I'm a huge fan of both "Dead Man's Shoes" and "A Room for Romeo Brass") and he blew me away here, as did Peter Mullan and Olivia Colman. They were just ssoo good, and the movie felt hyper-realistic and heartbreaking on a level you don't see very often. I was pretty much in tears through a good portion of it. I love dogs and hate rape scenes, but the quality of this film made it worth it. You wrote an excellent review and were spot on about several points.