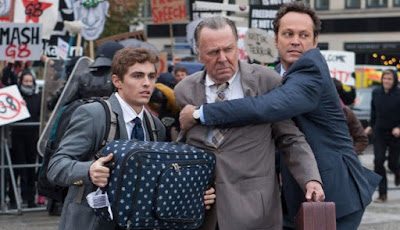 God bless Dave Franco, the Franco who makes all other Francos worthwhile. What a delightful little imp he is and how close he comes to single-handedly making Unfinished Business, a lesser Vince Vaughn comedy even by the increasingly lax standards of Vince Vaughn comedies, worth seeing. Well, okay, Tom Wilkinson is pretty good, too, and doesn't let the fact that this is clearly a role he took solely for the paycheque keep him from being an utter professional and turning in an actual performance, one that even has just a tiny bit of pathos to it. But, still, this is Dave Franco's show, which is all the more impressive when you consider that, by any objective standard, his character is kind of offensive.

Unfinished Business begins with its protagonist, Dan (Vaughn), having a Jerry Maguire moment, getting fired by his profit obsessed boss, Chuck (Sienna Miller), after refusing to accept a pay cut and deciding to go out and start his own company, offering to take anyone willing to come with him. No one follows but when he gets to the parking lot he runs into Tim (Wilkinson), who has just been let go as a result of the company's mandatory retirement age policy, and Mike (Franco), who doesn't actually work there but showed up to an interview with the company with a banker's box full of personal belongings on the theory that it would show confidence. One year later, the new company is in operation but not entirely off the ground yet - it's still just the three of them and they don't have an actual office space - but they are on the verge of closing a deal which will finally make them legit and solvent, and Dan believes it's now just a matter of formalizing things with a hand shake and signing on the dotted line.

Unfortunately, it turns out that the deal isn't quite as done as Dan was left to believe and he discovers that they're just the "fluffer" company that the client is using to make the real deal - with, of course, Chuck's company - happen on terms more favorable to the client. Knowing that this is likely the company's last shot, and desperately needing to bring in some money in order to support his family, Dan decides to take the team to Berlin to make a pitch directly to the head of the client company, rather than to the lower rung representatives giving them the run around. On their arrival, however, they're beset by many obstacles, including but not limited to the fact that they've come to Berlin when Oktoberfest, the G8 Summit, and the Berlin marathon are all taking place, and thus there are no vacancies at any of the hotels, their efforts to make their big pitch keep getting undercut by Jim Spinch (James Marsden), who works for the client company but is friends with Chuck and wants to assure her the win, and the discovery that Mike isn't just guileless but actually functionally mentally handicapped.

For a story that presents a lot of impediments to success for its heroes, Unfinished Business is a film weirdly lacking in any kind of tension. Dan and Chuck are barely depicted as rivals. Even when they're directly competing with each other, she doesn't really treat him with anything more harsh than mild curiosity. When he wins (Spoiler? Not really) , she treats it with a shrug and Miller plays it like she's just watched a Little League team win its last game of the season after being trounced in every game leading up to it. The reaction is less, "Damnit!" and more "Aw, look at them getting to do their little victory dance, how cute." The narrative is entirely inert because there are no stakes, lazy because the film doesn't even pretend that it's doing anything more than going through the motions. More time is spent developing and showing the mid-movie party sequence that helps Tim get his groove back than any really pertinent parts of the story, and the whole film gives off a vibe that everyone's just there to hang out and if a movie results from it, all the better.

This isn't to say that this is a worthless comedy, as there are some genuine laugh out loud moments in it. Franco's enthusiastic earnestness is quite winning, and balanced nicely by Wilkinson's gruff, low-key presence. Vaughn delivers basically what you would expect from him, though this is the gentler version of his usual schtick that he's been favoring of late, which can still be a bit crude but doesn't really possess any edges that haven't been sanded down. Unfinished Business isn't the worst of Vaughn's post-Wedding Crashers comedies (very few films of any kind are worse than Four Christmases), but it's definitely the kind of movie best half-watched when it pops up on TV.
Posted by Norma Desmond at 8:00 AM