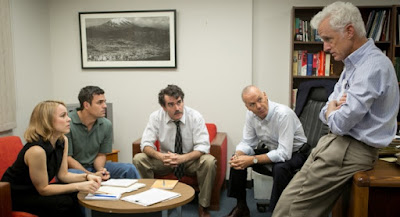 In a perfect world, we could all at least agree that children are deserving of protection and that their safety should take priority over everything else. That we don't live in that kind of a world, that we live in one where people who exploit and abuse children can be not just shielded from prosecution but given multiple opportunities to perpetuate abuse, proves that we still have some evolving left to do. The story told by Tom McCarthy's Spotlight is not surprising - the specific story on which the film is based was well-publicized and there have been so many other stories of systematic sexual abuse by priests that that's now the first thing many of us think of with respect to the Catholic Church - but it's nevertheless shocking to see in action the workings of a conspiracy of silence and the abuse of institutional power undertaken to keep the ugly truth hidden. Yet Spotlight is no David and Goliath tale of taking on a massive, powerful entity and defeating it; rather, it presents itself as a story in which there is a lot of complicity to go around and even the protagonists aren't necessarily without some guilt in helping to perpetuate the silence and, by extension, the abuse.

Set in 2001 and 2002, the film is about the reporters who make up the "Spotlight" team, an investigative reporting unit for the Boston Globe whose projects can take up to a year just to research before anything goes to print. The team - Walter Robinson (Michael Keaton), Michael Rezendes (Mark Ruffalo), Sasha Pfeiffer (Rachel McAdams), and Matt Caroll (Brian d'Arcy James) - is working on a story about the Boston police when the paper's new editor, Marty Baron (Liev Schrieber), suggests that they put that story aside and instead turn their focus to allegations that the Catholic Church has been covering up sexual abuse committed by its priests. With the exception of Rezendes, no one is all that enthusiastic about the subject, believing that there's no real story there, but they dutifully begin doing the research, seeing if they can dig anything up. No one doubts that there have been incidents of priests sexually abusing children but they have trouble accepting the idea that the church has undertaken a massive cover up and that the response to "bad priests" has been to just look the other way and shuffle them from one parish to another, using their influence to keep others - the police, the legal system, the press itself - looking the other way as well. It's only Baron who, alone among them, did not grow up in Boston, and is not Catholic, that can see the story, his outsider's perspective on this city of insiders allowing him a uniquely clear vision.

As they begin interviewing abuse survivors the names of 13 Boston area priests emerge as alleged abusers, a number which members of the team find unbelievably high until they interview Richard Sipe (Richard Jenkins), a former priest turned psychotherapist who has focused specifically on mental health issues of Catholic priests and extensively studied patterns of abuse by priests, who tells them that in his estimation the number is far too low and that the real number is likely as high as 90. Shock begins to turn to anger for the reporters, all of whom were raised Catholic though most have become lapsed as adults, who feel betrayed by an institution which has been a major part of their lives and a dominant part of their city's culture, and they slowly come to realize that this isn't merely a problem with the Church but a problem with the community as a whole. While the Church bears the majority of the blame, particularly for the way that it has historically failed to respond to allegations of abuse other than to move a predatory priest to a different parish so that he can start a new cycle of abuse, it's a wider reaching problem in which even people who are not connected to the Church in an official, professional capacity have acted in ways that value the institution's reputation over the lives of the people giving it their trust. It's not just bad priests, or an institution which is corrupting itself in its efforts to maintain its power (and hold on to its money); it's also police and prosecutors who facilitate the Church in dealing with abuse "in house," it's a judicial system filled with people who want to help keep abuses in the Church under wraps, and it's the press, including the Boston Globe itself, which could have broken the sexual abuse scandal some ten years earlier but instead buried allegations of multiple abusive priests in one short article that even those involved in writing it don't remember.

It's the fact that Spotlight is willing to acknowledge the culpability of its own protagonists that helps make it so strong. This is not a simple "us vs. them," little guys taking down the big guys, type of story, though there's an exchange in the trailers between Keaton's Robinson and Eric MacLeish, an attorney played by Billy Crudup, which suggests that it's some kind of righteous tale (the exchange is in the film, of course, but MacLeish's response results in Robinson being deflated in a way that goes contrary to traditional Hollywood narrative tropes). Rather than presenting the problem as something easily contained or compartmentalized, something separate from society itself, Spotlight presents the problem as one of culture in which everyone has some responsibility to, at the very least, open their eyes and see what's there, and it doesn't present the reporters as "heroic," just diligent and determined to do their job right, and on the whole it favors moments of quiet devastation over the grandiose. There are moments in Spotlight that are so emotionally piercing - such as a short, simple scene in which Sasha watches her devoutly Catholic grandmother read the finished story and clearly be devastated by it - they might take your breath away, and it's the straightforward, unadorned simplicity with which McCarthy unfolds the story and shows the characters going about their work that makes the film so affecting.

Spotlight, written by McCarthy and Josh Singer, is a meticulously constructed and gracefully executed film with a tremendous cast. Keaton, Ruffalo, McAdams, James, and Schrieber are uniformly excellent (even if Ruffalo's performance is just a little bit tic-y, though that may very well be true of how Rezendes is in real life), as are John Slattery as Ben Bradlee, Jr., the Assistant Managing Editor of the Boston Globe who helps usher the story into print, and Stanley Tucci as Mitchell Garabedian, an attorney who is at first written off as publicity hungry but revealed to be chasing publicity not for his own sake, but to force the light to shine on the abuse that's been going on and get it all out in the open, unable to be ignored. Spotlight is an ensemble in every way, which may mean that its individual actors may not end up singled out for praise (with the possible exception of McAdams, as the lone woman in a major role), but all of them are deserving of praise for the subtlety and humanity of their work here, which helps make Spotlight such an impactful film and one of the best of this year.
Posted by Norma Desmond at 8:00 AM

"Spotlight" shows how difficult it is to get the truth out of an organized crime syndicate. A team of Boston journalists worked tirelessly to find out that the Catholic church knowingly was running a massive organized childrape crime syndicate in Boston and around the world back in a time when the Catholic had a powerful influence. It also shows how Catholic followers tried to help the church get away with it.

Make no mistake, Spotlight is a movie about organized crime, featuring the Catholic church, the largest organized childrape crime syndicate in the history of the US, and in BRUTAL defiance of Jesus in Matt 18:6-14, where Jesus said childrape was unforgivable.

This movie shows how the Catholic church exhibited the same "code of silence" that the mafia has, without the honor, as they were protecting at least 249 "confessed" pedo-priests in Boston.

The pedo-priests in the Catholic church raped over 1,000 children in Boston alone, thanks to at least 249 pedophile priests, hidden and protected by hundreds of other priests, including Cardinal Law. (Only 90 were known at the time of the movie, but credits at the end show 249, and the number is now at least 271).

The Catholic church admitted 4,329 substantiated, accused pedophile priests in the US in their own John Jay report of 2004, and of course they lied. Since 2004, they have found an ADDITIONAL 6,630 pedo-priests according to the USCCB Schuth report of 2014.