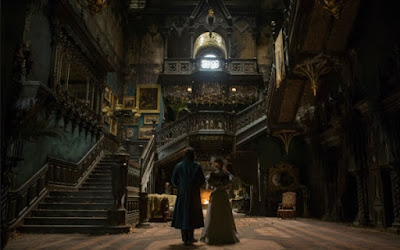 Guillermo del Toro's Crimson Peak is a triumph of crafts over storytelling. Its production design and costumes are some of the most glorious of any film I've seen this year, but though del Toro is able to build a creepy, effective atmosphere in the film's middle section, he's not quite able to sustain it for the remainder of the story. The story itself is a classic ghost/haunted house tale, though again, while the film nails the look of it, the actually telling of it unfolds in a largely predictable fashion. But, man, is it ever grotesquely beautiful to watch.

In 1901, Edith Cushing (Mia Wasikowska) harbors dreams of becoming the next Mary Shelley, but has difficulty getting publishers to pay attention to the content of her work and stop focusing on the "feminine" quality of her handwriting. Fiercely independent, she evades the potential for being married off, though she is clearly adored by her neighbor, Dr. McMichael (Charlie Hunnam), and is disdainful when the other women in her circle begin cooing about Sir Thomas Sharpe (Tom Hiddleston), the English aristocrat who has just come into town. When she comes face-to-face with Thomas, however, she's smitten and so, apparently, is he as he begins courting her in very public fashion and she finds herself responding to it despite the disapproval of her father (Jim Beaver), the cold detachment of Thomas' sister, Lucille (Jessica Chastain), and the sudden reappearance of her mother's ghost, who repeats a warning she initially delivered 14 years earlier when she tells Edith to "beware of Crimson Peak." After her father dies suddenly, Edith impulsively decides to marry Thomas and returns with him to England, where they will live at his family's ancestral home Allerdale Hall.

On arrival, Edith finds that her new home is a decaying mansion with a collapsed roof above the entrance hall and a floor that is sinking into the red clay earth. She also finds Lucille coldly welcoming, determined to keep Edith confined to only certain areas of the house, and constantly ready with a cup of tea; and she immediately becomes aware that there is some spectral force lurking around her. As Allerdale Hall's many ghosts start to become more aggressive in their attempts to get her attention, Edith begins to realize that all is not well at her new home and that, perhaps, Thomas is not quite the man she believed him to be. While back home Dr. McMichael is following his instincts that Edith's father's death was no accident and begins connecting the dots that lead back to Thomas and Lucille, Edith digs deeper into the secrets of Allerdale Hall, but she may be too late. As winter approaches and the few people who regularly work on the grounds of the isolated property get ready to leave for the season, Edith learns that she's about to be all alone with her new husband and sister-in-law. She also learns, to her horror, that because the red clay bleeds through the snow in the winter, the home has a special nickname: Crimson Peak.

Written by del Toro and Matthew Robbins, Crimson Peak has a solid premise but, like so many of the ghouls that make appearances through the course of the film, it has bones without much flesh. The story is full of holes (this is a minor example, but how exactly does Dr. McMichael manage to get to Allerdale Hall so quickly, given that the distance between the United States and England was a lot greater in 1901 in terms of the time it took to cross) and the characters are underdeveloped, though the actors try valiantly to fill in the blanks, to greater and lesser success. Wasikowska is a great actress but can't really sell Edith's sudden infatuation with Thomas, who is only ever vaguely defined as a character, particularly in the early going, so as to maintain some suspense over whether he's the bad guy or a red herring and Hiddleston's performance is, accordingly, a bit wishy washy as the character has to be flexible enough to have a third act turnaround. Chastain perhaps fares the best, presenting Lucille as tightly coiled at first and then letting her unspool with great intensity in order to meet the story's heightened sense of gothic melodrama. If Crimson Peak were a silent film, Chastain's performance would be perfect for it, as it's one that is played almost entirely on her face, in sneers and grimaces, sly smiles and wild eyes.

All that said, despite it's issues on a narrative level, Crimson Peak is still a beautiful film in terms of style, particularly in its rendering of Allerdale Hall, a structure in the process of ruin and decay that would be the perfect setting for a ghost story even without the red clay coming up through the snow once winter sets in. The first images of it are both beautiful and foreboding, as Thomas and Edith enter and walk beneath the section of the roof which has worn away, leaves falling down around them through the hole above, an image that will be echoed later with snow rather than leaves. From the creaky old elevator, to the bathtubs whose water runs red because of the clay in the earth, to the many shadowy nooks and crannies, Allerdale Hall isn't a place you'd ever want to spend a night, but the film is at its atmospheric best during the time it spends there. Those expecting a horror movie will be disappointed in it, but as a mood piece the film almost works, particularly in the way that it makes the vast, cavernous mansion seem so claustrophobic. Crimson Peak isn't del Toro at his best, but it does have a few things going for it despite also having some problems.
Posted by Norma Desmond at 8:00 AM