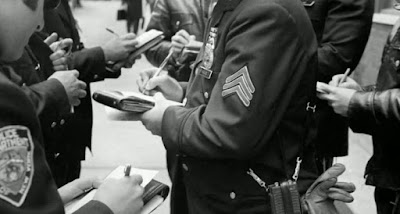 Tiller Russell's The Seven Five, a documentary about a major NYPD police corruption scandal during the 1980s and early 90s, is a film as infuriating as it is entertaining. It's entertaining because many of the people involved and who participate in interviews with Tiller, including main "character" Mike Dowd, are really great, charismatic storytellers. It's infuriating because it tells a true story about massive police corruption that was allowed to go on for years as a result of the police code of looking the other way when it comes to the actions of a fellow officer, and because the film itself, good as it is, can't help but further the self-aggrandizement of the subjects, some of whom seem pretty impressed with themselves and proud of what they were able to get away with even as they're expressing remorse for some of their misdeeds.

The Seven Five of the title refers to New York's 75th precinct, a notoriously dangerous area marked by poverty, drug crime and violence, and exceptionally high civilian murder rates and incidents of police officers being injured or killed on the job. Over-worked and under-paid, some officers turned to crime themselves, including Mike Dowd, who describes himself as coming out of the police academy wanting to be the right kind of cop, but getting beaten down by the job within a few years and finally crossing the line by taking his first bribe. On the other hand, even in his own recounting of that first incident, he makes it sound like he had sort of been looking for an opportunity to cross that threshold (and he didn't so much "accept" a bribe as demand it), and in footage of his testimony before the Mollen Commission in 1992 he describes the attitude of instructors at the police academy, and older officers once he got out into the field, as being one of a complete lack of respect for the idea of Internal Affairs, engendering a notion from the outset that cops protect cops no matter what, as well as the related idea that if you're a dirty cop, you'll be able to get away with it because those around you will look the other way. As described by others in the film, Dowd never seemed "like a cop" but more like a gangster, and was notorious enough in his police precinct that his eventual partner, Ken Eurell, fought tooth and nail to keep from being partnered with him before finally being won over by Dowd's personality, convincing himself that he could partner with him without being dragged into what Dowd was involved in.

As told by The Seven Five, Dowd is sort of like the snake in the garden encouraging Eurell to take a bite of the apple, but it's worth noting that Eurell wasn't exactly "clean" before they started working together. He wasn't taking bribes, but one of the ways the two men bonded was by stopping and having a few beers in the middle of their shift, and while drinking on the job might be a minor offence, at least compared to the armed robberies the two would participate in later on, it suggests that Eurell was never really against bending the rules when it suited him. Eventually Dowd and Eurell would get themselves involved with a middleman who connected them to Adam Diaz, the leader of a gang responsible for a major drug trafficking operation and related murders, who would hire the two cops for "protection." In that respect, and in addition to tipping Diaz off when he was about to be raided, they would offer what was essentially a police escort to Diaz's runners to ensure that his product and his money got from place to place safely, and would be paid so handsomely for their work that Dowd confesses to the Mollen Commission that he would sometimes forget to pick up his police paycheque because it accounted for such a small portion of the money he was bringing in. Eventually Dowd and Eurell would graduate to even greater crimes, forming a gang with Dowd's former police partner (who quit the police force in order to avoid being fired for corruption) and another former cop to commit armed robberies of Diaz's rivals, stealing money and drugs, as well as selling drugs themselves.

Obviously things eventually go sideways for Dowd and Eurell - if it didn't there would be no movie, and you know from the start that they eventually get caught because the first footage is of portions of Dowd's testimony before the Mollenn Commission - but it's to Russell's credit that he's able to unfold the narrative in a way that keeps raising the tension. Dowd's description of himself as coked up and paranoid in the days leading to his arrest, and the way the camera comes in tighter and tighter on his face as he's recounting his story, makes that portion of the film feel reminiscent of the sequence from Goodfellas when the walls really start closing in, and there's a palpable sense of desperation to Dowd and Eurell's competing descriptions of their last adventure together after their arrest, when the former came up with a plan to get the funds to flee the US by kidnapping a woman on behalf of a Dominican gang, and the latter realized that his partner was so far gone that he had no alternative but to break and work with Internal Affairs. The story just on its basic facts is pretty wild and interesting, but the telling of it makes it totally gripping, and I won't be even a little bit surprised if in a few years a feature version of this story ends up being told (though I don't envy the casting director who would have to find someone who can capture the spirit of Diaz, as that is one colorful mofo).

The Seven Five is a really entertaining watch, but it falters somewhat when it comes to point-of-view. It condemns the corruption that makes up the story, weaving into the telling an interview with an Internal Affairs agent who points out that what Dowd and Eurell did was not just profit from crime but help perpetuate it, putting in danger the lives of civilians already living at high risk as well as the lives of other cops tasked with trying to combat drug crime. At the same time, however, it sort of glorifies Dowd and his exploits, basking in the man's sheer brazenness (he's described as having made $600 per week, but showing up to work in a shiny red Corvette, making it as difficult as possible for the other cops in the precinct to pretend they didn't know he was dirty) and emphasizing all the awesome things he got to do with his ill-gotten gains. It also sends some mixed messages about its position with respect to cops reporting on other cops, pointing out that the idea of a cop code of silence creates an atmosphere where corruption is perhaps inevitable, but also mildly suggesting that Dowd is somehow more honorable for the fact that when he testified in front of the Mollen Commission he implicated only himself and refused to name other cops, whereas Eurell turned on the man who was his friend and partner and is characterized as a rat by some of the other men who were involved and are interviewed in the film.

Dowd is the natural center of a story like this because he's such a character and such an animated speaker, but Eurell is the more interesting and complex figure, the supposed innocent who becomes corrupted, who expresses a deeper level of conflict about turning to crime and a deep level of conflict and defensiveness about how he slipped out of the noose. He turned on his friend, but one might argue that he did Dowd a favor since there was no way in hell that kidnapping plot was going to work out and Dowd probably would have gotten life in prison instead of the 13 years he ended up doing. On the other hand, one might point out that, in exchange for his cooperation, Eurell didn't do any prison time at all despite being right there beside Dowd committing serious crimes. It's a tangled web and an exceedingly compelling and maddening one.
Posted by Norma Desmond at 8:00 AM