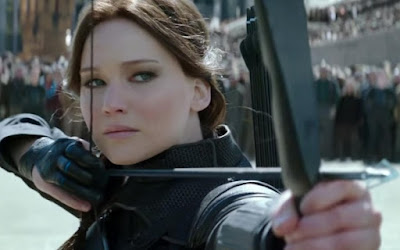 And so it ends. After four films the saga of Katniss Everdeen concludes in a fashion that is as rough around the edges and unwilling to "pretty" things up as she is. Even in triumph, Mockingjay - Part 2 is almost unrelentingly bleak, its characters more exhausted than relieved, its outlook only tentatively positive. It's a fitting end for a series with such a dark premise and which has always foregrounded the human cost of tyranny and rebellion, yet I can't help but feel like it doesn't quite have the impact that it should have. This is possibly (probably) the result of splitting the final chapter in the story into two films, leaving Part 1 feeling padded and Part 2 feeling a little bit empty. Mockingjay - Part 2 is full of action, but it doesn't have quite the same level emotional grounding that the other films have. It's a good film regardless, but the final two parts to the story are definitely the lesser pair compared to the series' first two films.

Mockingjay - Part 2 starts pretty much exactly where Part 1 left off, with Katniss (Jennifer Lawrence) recovering from being attacked by Peeta (Josh Hutcherson), having been tortured and brainwashed by President Snow (Donald Sutherland) into hating her. While the rebellion's President Coin (Julianne Moore) would be happy to see Katniss take a backseat during her recovery, she's determined to remain at the forefront in the push against Snow's forces and, eventually, to assassinate Snow herself. Despite Coin's attempts to keep her back and limit her movements, Katniss manages to sneak her way to the front lines, where she ends up assigned to a squad under the command of Boggs (Mahershala Ali) alongside Gale (Liam Hemsworth), Finnick (Sam Claflin), Jackson (Michelle Forbes), the Leeg twins (Misty and Kim Ormiston), Messalla (Evan Ross), and Mitchell (Joe Chrest), as well as the propaganda film unit of Cressida (Natalie Dormer), Castor (Wes Chatham), and Pollux (Elden Henson). Though the idea is that their role will be largely ceremonial, filming pieces that will inspire the rebels to carry forward, they soon end up in the thick of things and Boggs warns Katniss not to trust Coin, a warning she hardly seems to need after the squad receives a surprise in the form of a new member: Peeta.

While the most immediate threat for a while seems to be Peeta, who continues to suffer the effects of the brainwashing and could conceivably attack Katniss at any moment, the squad is surrounded by danger in the form of "pods" created by Gamemakers and placed throughout the Capitol to impede their progress. One by one, the members of the squad get picked off, falling victim to explosions, black tar, an attack by Peacekeepers, and later by genetically engineered "mutts," as they continue the arduous journey towards Snow's headquarters. Meanwhile, the rebel army continues to make progress, pushing the loyalists back, and leaving Snow to make what appears to be one last, desperate play to hang on to his power. In the aftermath, a new order will rise from the ashes of the old, and Katniss, more scarred and traumatized than ever, will have one final opportunity to be the hero her people need - even if the title is one she'll never be comfortable holding, no matter what she does.

Although it contains a lot of action, The Hunger Games series has never been about its main character running around being a badass. From the first film right through to the end of this one, Katniss has always been keenly aware not just of the physical toll of fighting and killing, but of the psychological and emotional toll as well. While a character like Gale, who has seen death and destruction but never been forced into the specific torture that Katniss, Peeta, and other competitors in the Hunger Games spectacle endured, can look blindly at the enemy and advocate for the complete annihilation of everyone on the other side, Katniss can see only individuals, people who don't necessarily need to die, and wants to find a way to avoid being either directly or indirectly responsible for any more deaths (save that of Snow) because she carries all of those losses with her. Death for her is very personal, something she can't be detached from, and she is a shell of herself by this film, something that Lawrence expresses subtly but effectively. Katniss has never been comfortable with the idea of herself as a hero or a leader, and that's the way Lawrence carries the character, as someone thrust into a role that she doesn't quite fit into and who doesn't so much grow into it as become broken by it. Whatever weaknesses the film itself might have, Lawrence's performance is always on point, charting the natural emotional progression of someone whose defining characteristic is the trauma she endures. It would be understandable if, four films in, Lawrence had grown bored with the character and gone onto autopilot, but her commitment to the role is total and right to the end of Mockingjay - Part 2, she remains one of the series' greatest and most dependable assets.

Lawrence as Katniss works here, as does Sutherland as Snow, whose hatred and fear of Katniss begins to transform into something resembling admiration as he begins to accept just how relentless she is, and Moore as Coin, who becomes so assured of her victory that she begins allowing her true colors to start to seep out. A lot of the action pieces work, too, particularly the sequence set in the Capitol's sewers where Katniss and company encounter the mutts, which are effectively frightening creatures. What didn't work from my perspective was the general lack of some series' favorites (Plutarch's limited role is understandable, given Philip Seymour Hoffman's death, but the film could have used more Haymitch, more Johanna, and more of the one-two comedic punch of Effie and Caesar), the emphasis on the "love triangle" between Gale, Katniss, and Peeta, which seems limper than ever here, and the big moment which, given the whole premise of the story with Katniss sacrificing herself to protect her sister, should have been the emotional cornerstone of the series but instead fizzles. I understand that that plot point is in keeping with how things play out in the book, but it still felt underwhelming as played out on screen, leaving it to Lawrence to do the heavy lifting that the narrative can't do itself. Still, despite those issues, Mockingjay - Part 2 is, overall, a good movie and a fine, if not extraordinary, end to one of the best movie franchises of the last ten years.
Posted by Norma Desmond at 8:50 PM