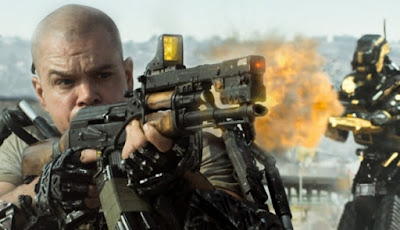 Three features in, I'm pretty well convinced that Neill Blomkamp is a one trick pony, and I'm not sure the trick is all that good. Don't get me wrong, District 9 has more going for it than not, but it still shares with subsequent features Elysium and Chappie a confused political outlook and a basic visual aesthetic, the latter of which may have seemed bold and exciting in District 9, but just feels recycled in successive films. Elysium isn't totally derivative, but many times when it does take a chance and try something different, it doesn't quite succeed in it, and in general it plays like a film that was imagined on a purely visual level first, with a narrative built around it to connect the images, and then some half-baked socio-political commentary crammed into it. All told, I'd have to agree with Blomkamp's own assessment of the film: "The script just wasn't there."

Set in 2154, the Earth of Elysium is a place undone by overpopulation and pollution, its population living in poverty and at the mercy of corporate interests, who keep the populace in line with a robot police force while denying the inhabitants of Earth access to the advanced medical technology enjoyed by the wealthy who inhabit Elysium, which orbits in Earth's atmosphere. A resident of what was once Los Angeles, Max Da Costa (Matt Damon) is an ex-con who works in a factory run by John Carlyle (William Fichtner), the designer of Elysium, and is exposed to a lethal dose of radiation which will leave him with only 5 days to live unless he can get to Elysium and access one of its Med-Bays. Only citizens of Elysium are allowed entry to the habitat, but there's a possibility of gaining entry illegally via human smugglers such as Spider (Wagner Moura), who agrees to get Max aboard a ship in exchange for Max doing a job for him. With Max ailing fast, Spider arranges for him to be equipped with a surgically attached exoskeleton and Max joins a team tasked with kidnapping Carlyle in order to steal financial information from him.

Unfortunately for Max and the rest, Carlyle isn't just carrying financial information when they ambush him; he's also carrying the information necessary to reboot the system on Elysium, which he intends to share with Delacourt (Jodie Foster), Elysium's Secretary of Defense, who wants to overthrow the President, who disagrees with her hostile method of dealing with illegal immigrants (which involves blowing them out of space), and usurp control. When Carlyle goes dark, Delacourt reactivates Kruger (Sharlto Copley), a sleeper agent previously cut loose by Elysium's government, and sends him after Max, who has downloaded the information Carlyle was carrying into his head. Max goes on the run, ending up in the home of his former friend Frey (Alice Braga), who desperately wants to get to Elysium to get treatment for her daughter, who is dying of leukemia, which ends up putting her on Kruger's radar and results in him kidnapping her and her daughter in order to get to Max. With time running out, Max has to find a way to get to Elysium, rescue Frey and her daughter, stop Delacourt, and find a way to use the information that Carlyle was holding to improve the lives of everyone left abandoned on Earth.

Damon is a consistently dependable actor and he does fine here even though there are some very legitimate criticisms that can be made about his casting and the fact that it means that, in a film where the elite up in space are predominantly white and the poor left behind on Earth are predominantly Hispanic, his character becomes another in a long line of "white savior" heroes. The supporting cast doesn't do quite as well, with Foster turning in an unusually weak performance as a character who is little more than a collection of evil glares and a vaguely South African accent, and whose motivation is practically non-existent (she wants to overthrow Elysium because... she wants to be able to shoot "illegals" out of the sky without being criticized for it? I don't know), and Copley is so far over the top that you can't even remotely take him seriously as the heavy. Braga, meanwhile, gets to do nothing but alternate between playing the "helper maiden" who nurses Max back to health and the "damsel in distress" whose peril will allow Max to make the ultimate sacrifice, an act which only further reduces the film to "been there, done that" status.

Many of the visuals in Elysium are pretty cool, including the conception of Elysium itself, which sort of looks like the Hamptons in outer space where members of the 1% are waited on by robot servants, but overall the visuals aren't cool or original enough to justify a screenplay that feels like it's been cobbled together from a bunch of half-formed ideas. Elysium puts some ideas out there about accessible health care being a luxury to be enjoyed on by the rich, the justice system being geared to keeping those born into underprivileged circumstances from gaining any kind of upward mobility, and immigration as a system corrupted by political desires to hoard resources for the local few while maintaining an exploitable foreign workforce that make those resources possible, but it's not really saying anything about any of those issues and, even if it were, the point would be undercut by the fact that the villains are too cartoonishly evil to actually connect to reality. With its socio-political themes underdeveloped, Elysium ends up being a fairly generic science fiction action movie.
Posted by Norma Desmond at 8:00 AM