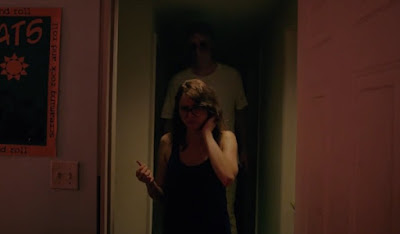 If nothing else, David Robert Mithcell's It Follows proves the theory that less is more. It's a horror movie almost entirely without blood and with a very minimal body count, and which relies almost entirely on the power of suggestion and anticipation in order to get the audience where it needs them to be. It's an effectively creepy movie with a synth heavy score and a preoccupation with sex as a harbinger of death that makes it feel like a throwback to 80s horror movies and which, like last year's Only Lovers Left Alive, makes great use of Detroit as a location, turning it into a city of the undead. I'm not much for horror movies generally, but It Follows is pretty great.

It Follows is set in the heart of suburbia, where its protagonist, Jay (Maika Monroe), continues to live in the house she grew up in as she goes to college. She's recently started seeing someone new, Hugh (Jake Weary), and likes him a lot, but after they go out and end up having sex in his car he suddenly chloroforms her and when she wakes up she's tied to a wheelchair in the ruins of what was once a building. He tells her that he isn't going to hurt her but needs her to listen and understand what he's about to explain to her: by having sex with her, he's passed something on to her, a curse, which will only be alleviated by her passing it on to someone else via sex. To prove that he's serious, he shows her what's now going to be coming after her: a spectral figure which only people who have the curse or have had the curse can see, which can shift and take the form of any person known or unknown to the victim, and which will now be following Jay until it kills her or she passes it on to someone else. If it kills the person she passes it on to, then it will start going backwards down the chain killing her and everyone who came before her.

At first, no one believes her when she tries to explain that something is after her, following her, but she's eventually able to convince her sister, Kelly (Lili Sepe) and friends Yara (Olivia Luccardi), Paul (Keir Gilchrist) and Greg (Daniel Zovatto) that something really is after her and together they track down Hugh - whose name isn't really Hugh and who doesn't really live at the address that Jay has for him - to find out more about the thing that's coming for her. He urges Jay to drive somewhere far away in order to buy herself some time to think, explaining that while "it" will always be following her, it also moves slowly so while it will eventually catch up to her, she can outrun it for a while. He also advises her to just pass it on to someone else as quickly as possible, but she doesn't want to simply "infect" another person and stick them with the problem. She and her friends instead decide to band together and try to find another way to stop "it" from killing Jay or anyone else.

Sexual anxiety has been a part of horror storytelling for as long as such stories have been around, but narratives are not always quite as upfront about it as It Follows, which explicitly uses sex as the root of evil. The horror itself is like a sexually transmitted disease, one which can be "treated" (by passing it on) but which never goes away (you can still see "it" after you've passed it on, it just isn't after you anymore), and the threat of it will always be hanging over your head because even if you successfully pass it on, if the person you've passed it on to fails to build the chain further, or the person that person passed it on to fails, then it will begin working its way backwards towards you. The obvious allegory here is HIV, but It Follows isn't doing a simple "sex kills" horror story, and is instead using that as a jumping off point for a story about the false comfort of privilege. Jay and her friends live in a part of Detroit far removed from the crumbling ghost town that exists elsewhere in the city limits and, at one point, discuss the fact that when they were growing up their parents would never allow them to go "below 8 mile" and into the other part of town. They're kids who live in houses with pools in the backyard and whose families have beachfront getaways that, despite being multi-story waterfront homes, are described as "not much." Jay and her friends, in other words, are the kind of people that it "isn't supposed to happen to," people whose socio-economic safety is supposed to protect and insulate them from the dangers faced by people of lesser means. The anxiety in the film, then, isn't merely sexual, it's an anxiety regarding the social hierarchy and the fact that such a thing exists only as a concept and does not act as a bulwark against the threats that exist out there in the world.

On a visual level, It Follows is pretty masterful, using the familiar language of cinema to create expectations that it sometimes exploits and sometimes undermines, giving the audience a deep sense of unease in both cases. It's the kind of film that slowly builds up a feeling a dread so effectively that a simple 360 panning shot can have you on the edge of your seat, even as it reveals itself to be a red herring. It Follows doesn't show a lot - and some of its most frightening scenes involve little more than a person walking slowly towards the camera and, in one case, standing entirely still on top of a roof - but it doesn't need to. Mitchell (who wrote the screenplay in addition to directing) constructs such a solid sense of the threat at the narrative's core that the terror can be sustained on an almost solely psychological level, without a lot of actual "attacks" and kills by its monster and without much in the way of explicit violence, which makes it a much more deeply powerful work than those horror movies that unfold by spilling buckets of blood. It Follows is a strong effort and a beautifully constructed piece of work. It's an instant classic of its genre.
Posted by Norma Desmond at 8:00 AM