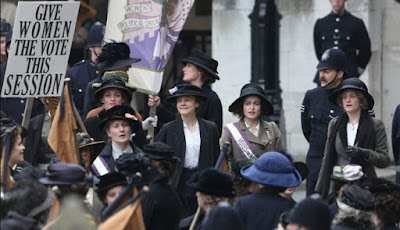 For a story that's all about the tenacity, fervor, and indefatigable spirit necessary to push a social movement towards victory, Suffragette is a weirdly passionless film. Too restrained, too polite, and way too superficial, Suffragette is at best a moderately successful period piece and not at all the searing political piece that it ought to be and wants to be. It's frustrating because there actually is a lot to say about the women's suffrage movement, which isn't just one story but a series of stories about tiered victories in which certain categories of women were granted the vote followed later by women of other categories (these categories determined by class, marital status, age, and, of course, race and ethnicity), but the film ultimately says little of any substance. It touches briefly on a lot of different issues about women's rights, but offers no real insight into any of them, so that the statement it makes is of the most basic kind: inequality is bad and harmful to society. And? The women in the film may gladly call themselves rebels, but there's nothing revolutionary about Suffragette.

Set in 1912 and 1913, Suffragette centers on Maud Watts (Carey Mulligan), who lives in poverty with her husband (Ben Whishaw) and their young son, George, and works in a laundry where the physical toll of the work chews up and spits out women at such a fast rate that, at just 24, she's one of the more senior women there and has attained the rank of forewoman, though that doesn't save her from being subjected to sexual abuse by the laundry's supervisor. After discovering that Violet (Anne-Marie Duff), one of her co-workers, is involved in the increasingly militant suffrage movement, Maud finds herself drawn into it as well, first agreeing to appear on Violet's behalf to testify before Parliament (Violet herself can't go through with testifying due to being severely beaten by her husband the day she is to appear), and then being galvanized into action after being beaten and arrested by the police, along with Violet, Edith Ellyn (Helena Bonham Carter), and Emily Davison (Natalie Press), all longtime soldiers in the organization headed by Emmeline Pankhurst (Meryl Streep).

After her release from prison, and despite her husband's warnings that he won't be disgraced by having a wife who is a known political agitator, Maud continues to become more and more invested in the suffrage movement, even as it brings her to the attention of Inspector Steed (Brendan Gleeson), who is charged with gathering intelligence on the movement, breaking up the group, and locating Pankhurst, who has gone into hiding so that she can continue to give instructions and coordinate efforts to undermine the government through acts of anarchy. After being arrested again and having her photograph published in the paper where she's identified as a suffragette, Maud loses her job and is tossed out by her husband, who cuts off her access to George, an act against which she has no recourse as by law a mother has no legal rights to her children. She's also approached by Steed, who offers her the opportunity to become an informer on the movement and tries to convince her that that is the best she can hope for, as the system will never change and women like her will never matter and never be heard. Undeterred and pushed to the point where she has nothing left to lose, Maud goes all in with the movement and devotes herself entirely to the cause.

Written by Abi Morgan, Suffragette brings up a lot of salient facts and ideas about the suffrage movement, but uses them for no reason except to keep underlining its thesis that things were bad for women. Without the vote, women were politically and socially powerless and unable to change their circumstances. This meant that poor women worked for a pittance at jobs which could see them maimed and/or killed and could do nothing to ensure their own safety or to force an increase in their pay, and their lack of agency and voice in the public sphere meant that they could do nothing but accept it or risk losing their job if their boss made sexual advances on them. For a woman like Maud, it meant that her husband could first cut her off from their son and then arrange for him to be adopted by a wealthy couple without Maud being able to do anything to stop it. For a woman like Maud's friend, Alice (Romola Garai), it meant that though wealthy, with money brought by her into the marriage, she would have no control over those funds because she was the property of her husband. The film brings up all of these facts (as well as the fact that Pankhurst's organization started to fracture once she started to demand increasingly violent forms of protest), but it doesn't really say anything about them; it just brings them up for the sake of bringing them up (and this is to say nothing of the fact that the big, climactic moment comes partially as a result of Edith being robbed of her agency by her husband, who is supposed to be one of the "good" ones but decides in that moment that he knows better than her and physically stops her from doing what she wants to do, an act about which the film apparently has nothing to say). The only times Suffragette comes close to actually unpacking the issues at debate are in one-on-one scenes between Maud and Steed which, though the best in the film due to the back and forth between Mulligan and Gleeson, are too short and too few and far between to actually elevate the film.

The other problem with the film on a narrative level is that the characters are at the mercy of the story, rather than the story flowing naturally from the characters. Characters act a certain way only until the film needs them to act differently to make the story work, at which point they do an abrupt about face that doesn't really feel earned. For example, Violet is all about the movement even as its tactics shift towards property damage like breaking shop windows, starting riots, and blowing things up, but then suddenly balks when plans come down to blow up the empty summer home of David Lloyd George. Steed, meanwhile, is cold and ruthless in his desire to suppress the movement until suddenly he's not and begins to feel some sympathy for the women he's helping to brutally oppress, though this does at least make him slightly better than basically all of the other men in the film, who are depicted with all the complexity of a toddler throwing a tantrum because he doesn't want someone else to be allowed to play with his toy. Suffragette has a great cast (though if you're interested in it because of the presence of Streep, know that she's in the film for less than 10 minutes) and though no one fares badly (and Mulligan is, in fact, quite good in the lead), the film doesn't give them much to sink their teeth into either. The women portrayed by the film, some of whom were real people, some of whom are partially based on real people, may have been fearless, but Suffragette is not nearly brave enough to do their story justice.
Posted by Norma Desmond at 8:00 AM