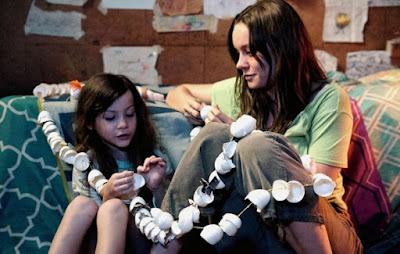 "This is the story you get." It may not be pretty, it may not be nice, but sometimes the narrative is given to you by circumstance rather than decided by you according to choice and desire. Room, based on the novel by Emma Donoghue, who also provides the screenplay, is the story of a usurped narrative, of a girl plucked from the story she thought she was living - one of an ordinary girl who would live an ordinary life doing ordinary things - and dropped into a nightmare scenario that is, horrifically, less uncommon in real life than most of us would probably have ever guessed. It's a story of pain and brutality and the enduring effects of trauma, but it's also a story of hope, of endurance, and of love. It's a difficult movie, but also a profoundly moving one.

As the film opens, Jack (Jacob Tremblay) and his Ma (Brie Larson) are living in "room," a shed kept closed with an electronic lock and with only a skylight providing any view to the outside world. Jack, who is about to turn five, has never been outside of room and believes that there is nothing beyond its walls except outer space, and that the people and things he sees on TV come from another planet. Ma has been in room for seven years, having been abducted as a teenager by a man she calls "Old Nick" (Sean Bridgers), and having spent the years since Jack's birth weaving the fiction of room as the whole world in an effort to protect Jack. Protecting Jack has been the thing that gives her the will to carry on, but now the time has come for her to try to explain some of the truth to him so that he can help them escape.

In many stories, the narrative would build to the escape and then would come the moment of catharsis and relief before the end, but that isn't how Room is structured. The escape comes midway through the film and the remainder is about the experience of surviving but living with the trauma of what happened, of returning to the world but no longer being quite equipped to navigate it. Once they escape, Ma gets to become Joy Newsome again, though the life she left behind doesn't really exist anymore. In the years since she's been gone, her parents, Nancy and Robert (Joan Allen and William H. Macy), have divorced and her mother has remarried, and when they're all reunited her father can't even bear to look at Jack, the walking, taking evidence of the way his daughter has been violated. While Jack struggles initially with all the new things that surround him, and misses the familiarity of room, which he never knew to be anything but a safe space because Ma made it so, he ultimately begins to adapt quickly. Once life used to be one way, and now it is another, and he's able to roll with the transition. For Joy, though, returning is almost as painful as being away, and no matter how long she's out of captivity, no matter how safe she is back in her childhood home, part of her will always be stuck in that shed.

Told from Jack's perspective, Room walks something of a tightrope, unfolding the story within the parameters of his limited understanding while also finding a way to express the full breadth of the experience from an adult perspective. It achieves this in large part through a focus on reactions of adults to Jack, from Ma's desperate frustration as she tries to undo years worth of storytelling to make Jack understand the truth about what room is, to Nancy's reaction to Jack's casual revelation that he would be tucked away in the wardrobe in room whenever Old Nick would come to Ma. To him, this detail means virtually nothing; it was just a normal part of life, but to her it's a look into what her daughter was put through. Room is not graphic in terms of what goes on in its titular locale, nor does it have to be; it doesn't wallow in misery and proceeds in a way that is very compassionate towards its characters.

This is particularly true of Joy, who begins to come apart once it's no longer necessary for her to hold it together for Jack's sake. Back in what was once her home, she struggles with resentment and rage against people who were once her friends and who were allowed to go on and live their lives normally, against her mother for raising her to be "nice" and thereby making her a potential victim, and against Jack, who longs for the closeness they had in room's confined space and can't comprehend why his once loving Ma now wants to be away from him and has become almost ambivalent about parenting him as she falls into a deep depression. The film doesn't vilify Joy for this; it merely seeks to understand it, and Larson delivers a commanding, possibly career-defining performance. Room is a film which may make you feel shaken at times, but it's also an incredibly moving and deeply felt character drama, and it's an artistic triumph in all respects.
Posted by Norma Desmond at 8:00 AM