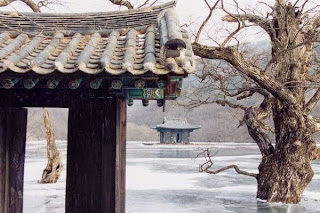 Kim Ki-duk's Spring, Summer, Fall, Winter... and Spring is a film that grabs you immediately with the exquisite beauty of an image and then doesn't let you go. It is a wholly engrossing film which, despite its gentle and contemplative approach to its story, unfolds so quickly that you feel sad that it's ending so soon. Exploring the life of a Buddist monk by dropping in on him at key moments in each phase of his life (the seasons in the title refer to his childhood, late adolescence, adulthood, and maturity), the film is quiet and unassuming but deeply moving and evocative. Spring, Summer, Fall, Winter... and Spring has been on my list of movies to watch for quite some time and I wish I'd gotten to it sooner as it is such a unique and wonderful piece of work.

Set at a hermitage floating in the middle of a lake, the film opens with a young apprentice (credited as "Child Monk" and played by Kim Jong-ho) living his master (Oh Yeong-su) and learning the ways of Buddhism. To travel to and from their floating home, they use a rowboat and they regularly go walking through the forest that surrounds them, often collecting herbs. One day the master spots the apprentice gleefully tormenting a series of animals by tying stones to their backs and then watching them struggle to move. The next morning he wakes to find that a stone has been tied to his back and the master informs him that he will carry the stone until he's found each of the animals and untied them from their anchors, warning that if any of them has died he will "carry the stone in his heart forever." At the conclusion of this life lesson, the film transitions from "Spring" to "Summer," at which point the now teenage apprentice ("Boy Monk," played by Seo Jae-kyeong) has a sexual awakening courtesy of the arrival of a teenage girl (Ha Yeo-jin) and her mother, who have come to the master in the hope of finding a cure for the illness which is afflicting the girl. The girl is left to live for a time at the hermitage with the master and the apprentice, and soon enough the apprentice and the girl have begun a clandestine relationship. Once the relationship is discovered by the master, he sends the girl back home and the apprentice runs away to join her, abandoning the hard simplicity of life at the hermitage in order to live in the modern world (it isn't until the girl and her mother arrive in modern dress that the film gives any indication that it doesn't take place in the distant past).

"Summer" becomes "Fall" and many years have passed. The master still resides at the hermitage and after a visit to the nearby village, he foresees that the apprentice will soon return and begins preparing for his arrival. Soon enough the now adult apprentice ("Young Adult Monk," played by Kim Young-min) returns, full of anger and desperation and attempts ritual suicide. The master prevents him from following through with his plan and instead writes out Buddhist scripture across the deck of the hermitage then orders the apprentice to carve out each character with a knife in order to return peace to his heart. As he is undertaking this task, two men arrive at the hermitage looking for him and are talked into allowing him to finish what he's doing before taking him away. When the "Winter" chapter opens the master is long dead, the hermitage long abandoned, and the apprentice ("Adult Monk," played by Kim Ki-duk) returns to take his master's place. The lake is frozen, the old rowboat partially sunk in the ice, and the conditions in the hermitage harsh, but the monk carries on with his training and eventually receives visitors who will begin the cycle of the seasons anew.

Spring, Summer, Fall, Winter... and Spring tells its story in a deliberate and thoughtful way, yet also somehow simultaneously tells it at a pace that feels quick. Perhaps it's because the story is divided neatly into 5 segments, each one introduced with the metaphorical raising of a curtain in the form of the opening of the spiritual door at the edge of the lake, that it feels like it moves fast. It's like five interconnected short films, each one lasting approximately 20 minutes (some play out in a somewhat shorter time span, others play out just slightly longer), with each segment relating what can be considered a self-contained story, though obviously each segment builds on the one that came before. Of the segments, none can be said to be the weak link, with each possessing strengths which serve the growth and development of the central character as he passes through the various phases of his life. Every season of his life presents him with a new learning experience until finally, older, wiser, scarred and heavy-hearted from experience but finally at peace, he reaches the point where he occupies the position as teacher, guiding a new apprentice as the cycle restarts itself.

Spring, Summer, Fall, Winter... and Spring is a well constructed film and Kim (who wrote in addition to directing and starring as the older apprentice monk) directs it with a great deal of grace and in a way that makes the most of the natural beauty of the setting. Though it wouldn't feel quite right to call it a magic realist film, it does have a strong sense of magic to it both literally and figuratively. Literally, there are a couple of overtly mystical things in the film, such as a scene in which three characters take the rowboat to shore, leaving the master seemingly stranded at the hermitage before the rowboat drifts directly back to him as if at his direction, or the sequence in which the master spies the child apprentice tormenting the animals, appearing on the shore despite there being only one boat and the apprentice having gone to shore alone. Figuratively the mystical aspects are built in by virtue of the setting and the narrative's concerns with the spiritual state of its characters. This aspect does not overwhelm the story; like everything else in the film it is understated and elegantly rendered. Spring, Summer, Fall, Winter... and Spring is a beautiful film, the kind that can only be called a masterpiece.
Posted by Norma Desmond at 8:00 AM