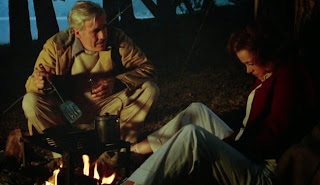 I'm not sure what people saw in Julia in 1977. Enough, apparently, to give it 3 Oscars and 8 more nominations and the distinction of tying The Turning Point for the most nominated film of its year. I confess that I don't get it. Perhaps, when a film features so many names from Oscar glories past (director Fred Zinnemann already had 4 Oscars, while Jane Fonda, Jason Robbards, and Maximilian Schell each had 1, and Vanessa Redgrave had already been nominated 3 times), it just seems like it must be good. I don't know, but I know that Julia is not a particularly good movie. I'm not sure I'd go so far as to call it a "bad" movie, but it's definitely a muddle in which the good elements are lost in a story which doesn't seem to know its own purpose.

Julia, adapted by Alvin Sargent from a section of Lillian Hellman's memoir Pentimento, is ostensibly about the relationship between Hellman (Jane Fonda) and her lifelong friend Julia (Vanessa Redgrave). In flashbacks to their adolescence, where Julia is depicted as having grown up with enormous wealth and as having developed a social conscience strong enough that she desires nothing more than to redistribute it, Julia and Lillian are portrayed as being nearly inseparable, with Lillian viewing her older friend through a veil of hero worship. Eventually Julia leaves for England in order to attend medical school at Oxford and then moves to Vienna to study with Sigmund Freud. Lillian, meanwhile, struggles to get her career as a writer off the ground and lives with Dashiell Hammett (Jason Robbards), who is her mentor as much as her romantic partner. As she struggles to finish a play she's been working on, Hammett suggests that she try writing it in Europe, which is eventually what she decides to do, going to Paris and hoping that she'll be able to meet up with Julia in Vienna. When she arrives in Vienna, however, she finds Julia in a bad way, hospitalized after having been severely beaten, along with other students at her school, by Nazi demonstrators. Lillian intends to stay by Julia's side but one night Julia simply vanishes, leaving a note behind that Lillian should leave Vienna immediately. Though she tries to find out where Julia has been moved to, the hospital claims that they have no record of Julia ever having been a patient there. Lillian persists in digging for the truth and eventually gets word that Julia is safe and is given an address where she can write to her. Worried, and not a little frustrated, Lillian returns to the United States.

Once home, Lillian completes her play and becomes the toast of Broadway once it premieres. Widely celebrated and basking in her newfound fame, Lillian is invited to attend a conference in Russia and departs alongside her friends Dorothy Parker (Rosemary Murphy) and Alan Campbell (Hal Holbrook). The trio arrive first in Paris, where Lillian receives word that Julia needs a favor and then is approached by Johann (Maximilian Schell), who informs her that Julia needs her to smuggle money through Nazi Germany which will be used to buy the freedom of people who will otherwise perish in concentration camps. Though ill-suited to the task, Lillian agrees and when she arrives in Berlin she meets up with Julia, who informs her that she has one more favor to ask. She's had a baby whom she has hidden away with a couple who own a bakery in Alsace and she would like Lillian, who is the girl's namesake, to care for her in the US for the duration of the coming war. Lillian agrees and then continues on her way to Russia, seemingly making a narrow escape from capture by the Nazis. But Julia will not be so lucky.

Of the film's 11 Oscar nominations, 4 of them were for acting: Fonda as Best Actress, Redgrave as Best Supporting Actress (which she won), and Robbards and Schell as Best Supporting Actor (which Robbards won). There's not a fault to be found with any of the actors in the film (which marked the film debut of Meryl Streep in a small role), though it should be said that of the characters only Lillian Hellman and Dashiell Hammett, perhaps by virtue of the fact that they were known figures, emerge as real characters. Julia is an enigma about whom Lillian seems to know very little despite having spent much of her life idolizing her (and possibly more, if the suggestive comment of a one scene character is to be believed). She appears more as a mythological character - the heiress socialist crusader - than as a lifelong intimate of the woman from whose point-of-view the story is being told. As a result, the relationship between Lillian and Julia, despite being the story's centerpiece, can't hold the narrative together and no amount of back and forth between their times together when they were younger and Lillian's later desperate searches for Julia can disguise the fact that there's just no depth to this relationship.

The main problems with the film come down to its construction of Julia as a character (which may ultimately have been the result of the fact that though Hellman posited that Julia was a real person and that the story was based on her actual experiences, it's likely that that's untrue) as well as the construction of the story. There's an adage that when you write a story, you should enter it as late as possible and though Julia technically succeeds in that, in that it is bookended by shots of Lillian towards the end of her life and that older version of Lillian narrates the piece, it spends a lot of time getting to what feels like the actual story. Though the opening section is meant to establish Lillian and Julia's friendship, it doesn't really succeed at that because it's so busy doing other things at the same time, like establishing Lillian's struggles to get her writing career off the ground and exploring the dynamics between Hellman and Hammett (which it succeeds at doing so well that you wish the film had just been about that relationship). For its first hour Julia lacks focus and seems to be searching for its story; it isn't until Lillian meets Johann and receives her assignment that the narrative feels like it finally clicks into gear and by then the movie is half over. There are a number of great individual scenes and moments in Julia, but taken as a whole it's a film that just doesn't seem to know what it wants to do.
Posted by Norma Desmond at 12:51 PM