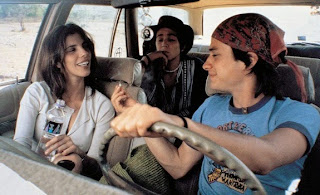 Before he created new cinematic vistas in Gravity, before unfolding a terrifying and bleak vision of the future in Children of Men, before putting a dark spin on the Harry Potter series with The Prisoner of Azkaban, director Alfonso Cuaron made a small character-driven film that is part sex comedy, part relationship drama, part road movie, and part exploration of a nation divided against itself by the politics of poverty. Though discussion of the film often drifts towards the sexuality it displays so freely, Y Tu Mama Tambien is much more than the sum of its characters’ parts; it’s a deeply felt work about the ways that people come together and, eventually, how they come apart.

The two young men at the center of the story are Tenoch (Diego Luna) and Julio (Gael Garcia Bernal), recently graduated from high school and at loose ends before they commence the next phase in their education, growing bored in the absence of their girlfriends, who are spending the summer traveling through Europe. While attending a wedding they meet Luisa (Meribel Verdu), the Spanish wife of Tenoch’s cousin and, instantly attracted to her, try to talk her into joining them on a trip to a beautiful, secluded beach known as “Heaven’s Mouth.” Luisa declines, at first, but after her husband confesses to his latest affair, she decides to take the boys up on their idea, which in turn leaves them scrambling to figure out where to go since Heaven’s Mouth is something that they made up. They set out on the road and it isn’t long before Luisa, grieving for her marriage and over thoughts of her own mortality, decides to seize the day by having sex first with Tenoch and then with Julio. A rift develops between Tenoch and Julio, resulting as much from their jealousy over each other’s relationship with Luisa as from the secrets that they begin to reveal to each other, including that they’ve slept with each other’s girlfriends, until Luisa, who has neither time nor patience for their bickering, forces them to bury the hatchet and acknowledge that they’re acting like fools. The renewal of their friendship, however, will prove to be short-lived as the new level of intimacy reached between Tenoch and Julio’s is really just the last gasp before the end of their friendship as they know it.

The narrative in Y Tu Mama Tambien comes together in three major threads. The first, and most obvious, is the sexual adventure that the trio embark on and which pushes the story forward on an ever-heightening wave of sexual tension. The second involves tension of another kind and comes from the story unfolding behind and off to the side of the main story and involving the division between rich and poor. Tenoch, Julio, and Luisa have embarked on what is meant to be a carefree adventure, and they continuously come into contact with signs of the civil and economic unrest in the country in moments which are commented upon by the story’s narrator but, tellingly, hardly even noticed by the three protagonists. Though Tenoch is the son of a statesman and firmly a member of the upper class, Julio comes from a more economically disadvantaged background, and when the two embark on their adventure they first have to track down Julio’s sister so that they can borrow her car. She’s participating in a large political rally, but Tenoch and Julio seem to have no connection to it even as they move through it; to them life is nothing but the pursuit of pleasure and the political situation is something which holds no interest for them and fades from their view as soon as they get the keys to the car. They are aware, vaguely, of the problems in their country, but they have no engagement with it and do not see themselves as part of the solution. Their lives are complete and separate from what’s going on in their own backyards.

The third thread, and the one that doesn’t come clearly into view until the very end, is all about Luisa, who enters the film as an object of Tenoch and Julio’s lust, and ends the film as its most active and fully-realized character. It may seem odd that someone who proves to be as mature and in control as Luisa would have any interest in spending time with Tenoch and Julio, but before the film even introduces her, it subtly establishes how she could be attracted to them via a throw away moment at the wedding reception when Julio accidentally causes Luisa’s husband to spill a drink on himself and he throws a foot stomping tantrum. She’s obviously accustomed to playing the role of caretaker to an immature man but now, with her circumstances changed, she’s no longer content to merely caretake and tries to make Tenoch and Julio grow up a bit and teach them something about life while also, finally, doing things for her own benefit and her own pleasure. While Luna and Bernal bring youthful exuberance to the film, as well as the perfect mixture of cockiness and underlying uncertainty to their characters, it is Verdu who provides the film with its emotional underpinning and the story with its forward momentum, and her performance is quiet but exquisite in its precision and skill.

Y Tu Mama Tambien is a film that mixes subtlety with explicitness. The sex in the film falls in the latter category, and in fact the film opens with a sex scene, and the voiceover narration acts to make plain the economic divide at play in the background of the story. However, that divide is also made evident in unspoken ways, including a long sequence which starts with a maid making lunch for Tenoch and taking it to him while the ringing of a phone blares through the large, cavernous house. When she finally gets to Tenoch, she hands him the food and then answers the phone, which was literally right beside him and which he made absolutely no effort to answer, even though it was from him. The place of social privilege from which he operates it made as clear as it can possibly be in this moment, and it’s sequences like this one - in addition to several scenes in which the film sets up the revelation of what’s really going on with Luisa and the way that the film hints that the intimacy that makes Tenoch and Julio so inseparable will also result in a breakdown of the relationship by way of homosexual panic – in which Cuaron demonstrates confidence enough to let scenes speak for themselves, where the film gains its real power. Y Tu Mama Tambien came onto the radar in large part due to all the talk about the film’s sex, but the flesh on display is not why it endures; rather, it is because of how deeply the film goes beneath the surface level of skin to reach the hearts and souls of its characters.
Posted by Norma Desmond at 8:00 AM

Great write-up for a great movie. I saw it in the early stages of becoming a film buff and was simply blown away. I completely agree that this is one if this century's essential films.

It's one of those movies that really stays with you, but can still surprise you if you watch it again at a later date.