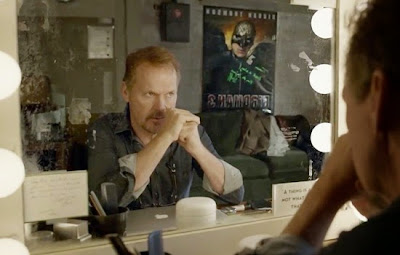 Gimmicks are a double-edged sword. On the one hand a gimmick can bring attention to a film which, in a crowded marketplace, might otherwise get lost in the shuffle. On the other hand, a gimmick can dominate conversation in such a way that the movie itself gets lost even as people are talking about it. Designed to look like it is unfolding in one long, continuous take, Alejandro Gonzalez Inarritu's Birdman has a gimmick that can't be ignored, but it is more than a mere exercise in form. A vital and exciting film as much for its technical wizardry as for the bravura performance as its center, Birdman is a singularly entertaining movie and an experience that shouldn't be missed.

20 years ago Riggan Thomson (Michael Keaton) was a hugely successful movie star, the leading man in the superhero franchise "Birdman." Now, having grown older but still living in the shadow of his career-defining role, Riggan is trying to restart his career by writing, directing, and starring in a play adapted from the Raymond Carver story "What We Talk About When We Talk About Love." The play is being produced by Jake (Zach Galifianakis), who frets about budget concerns and a possible lawsuit from an actor injured on set, and co-stars Riggan's girlfriend, Laura (Andrea Riseborough) as well as Lesley (Naomi Watts), a veteran actress who has been waiting for her big break and is a bundle of nerves now that it's come, and Lelsey's boyfriend, Mike (Edward Norton), a Broadway "name" who comes aboard at the last minute to take over the role that was being played by the actor who is now injured. Though initially pleased when Mike joins the production, as his name and his talent bring a sense of legitimacy to the project, Riggan quickly sours on Mike after the actor repeatedly undermines and challenges him, turns one of the preview shows into a spectacle by getting drunk on stage, and once it becomes clear that he's moving in on Riggan's daughter, Sam (Emma Stone), a drug addict fresh out of rehab whom Riggan is employing as his assistant while making the play.

With opening night swiftly approaching, Riggan struggles to get the backstage drama under control and worries about his loss of cultural relevance and his ability to get audiences to take him seriously as an actor. As his anxieties mount, the voice inside his head - the voice of Birdman himself - begins to get louder and louder, encouraging Riggan to let him come out again by taking back his identity as a movie star and showing everyone how it's really done. After a potentially disastrous preview that ends up being saved by the audience's embrace of the bizarre turn it takes, Riggan has a confrontation with a theater critic (Lindsay Duncan) who openly informs him that she intends to use her influence to destroy his play, which in turn sets Riggan off on a brutal deconstruction of the act of criticism (Keaton sells the dialogue, but it still never feels like much more than Inarritu's preemptive strike against critics who might write his film off as a work of stylish emptiness). Following the confrontation, Riggan seems to tip over the edge he's been balancing on, giving in to the Birdman persona just in time to deliver an opening night performance that no one will soon forget.

It's tempting to watch Birdman and look for where Inarritu, cinematographer Emmanuel Lubezki, and editors Douglas Crise and Stephen Mirrione have hidden the cuts, which manage to feel seamless even when they're obvious (for example, moments when characters disappear into darkened hallways, or moments when the camera makes quick pans from one spot to another). The film doesn't so much transcend its style as submit to it, calibrating everything to suit the "one shot" design which results in a certain amount of staginess but also creates some undeniably thrilling moments. Lubezki broke new ground with his Oscar winning work in last year's Gravity and may very well walk away with the Oscar again this year as Birdman is very much a cinematography showcase. That said, as dominant as Lubezki's work is, the film does amount to more than photographic sleight of hand. Riggan's spiral into madness is pitched at the level of dark comedy and succeeds in being tragically funny even if his existential crisis is not quite as profound as it's made out to be. However, there is one moment that definitely does work and digs as deep as it intends, when Sam gives voice to what Riggan is afraid to articulate, administering a gut punch that lands with brutal precision thanks to Stone's delivery and Keaton's reaction. It's a moment when Riggan hears what is likely the truth, but it's also a moment when Sam gives vent to the resentment that's been building up inside of her since childhood and there's an emotional truth to it that helps set the stage for the bittersweet majesty of the film's finale.

Just as it's tempting to look for the cuts, it's tempting to draw parallels between Riggan and Keaton. Really, it's sort of impossible not to given the whole premise of the character, that he once headlined the biggest superhero franchise of an era and then walked away from it in order to focus on other artistic pursuits. Aside from voice work and supporting roles, Keaton more or less faded out of movies by the end of the '90s, however, unlike Riggan, whose desperation is often palpable and who may or may not be capable of pulling off what he's trying to do, Keaton is and always has been the real deal. He's an actor capable of taking scenes to zany heights and then bringing them right back down to Earth and doing it in such a way that it not only looks easy, but invisible. He does that over and over again in Birdman, reminding you of what a daring and skilled actor he is and leaving you feeling as if his presence is something that movies have been sorely missing during the last decade and a half. The entire cast is really good, with Stone having the most to do after Keaton and getting a chance to bring some darker edges to her screen persona, and Norton absolutely stealing every scene he's in by playing up to his own reputation for being somewhat difficult. With the exception of Stone, the supporting cast ends up being left behind as the film rushes towards its finale, which is a shame since they're all doing such fine work, but at the same time it's hard to complain because Keaton's central performance is so absorbing. Just as to some people he will always be Batman, now he will also always be Birdman.
Posted by Norma Desmond at 8:00 AM

Thanks dear for sharing great information with us!! I have not seen the movie birdman. After reading your article it seems quite interesting movie and I am adding my best chick flicks movies. Just have a look.