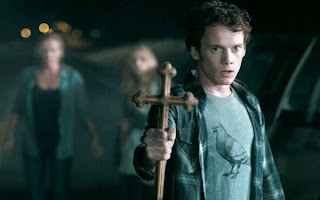 What could the sweetly offbeat comedy Lars and the Real Girl and wicked horror remake Fight Night possibly have in common? To my total shock, a director (weirder still, Lars was preceded by Mr. Woodcock, and Fright Night was followed by this year's Million Dollar Arm - could four films be any less alike?). Craig Gillespie is the director in question, a filmmaker who isn't yet a "name" but is apparently quite versatile. Fright Night (a remake of the 1985 film of the same name) is not a great film like Lars (which was, and remains, one of my favorite films from 2007), but it's a pretty good movie, darkly funny, gory, and entertaining as hell. I guess that makes Colin Farrel one for two where remakes are concerned.

Fright Night wastes no time in getting to the bloodshed, opening with a scene of a family slaughtered in their home before moving on to introduce its protagonist, Charley (Anton Yelchin), a teenager who lives with his mother, Jane (Toni Collette), in a Las Vegas suburb. Prior to the events of the film Charley was best friends with "Evil" Ed (Christopher Mintz-Plasse), but broke off the friendship when he ascended to a higher social group and started dating Amy (Imogen Poots). Now Ed is blackmailing Charley, threatening to torpedo his newly acquired popular status by sharing videos of the nerdy exploits of their past with everyone at school unless Charley helps him with a special project. Several students at school have gone missing recently and Ed has become convinced that the culprit is Charley's new neighbor, Jerry Dandridge (Colin Farrell) and that Jerry is a vampire. Charley refuses to believe it and abandons Ed to his investigation, which results in Ed getting cornered by Jerry and turned into a vampire. After Ed goes missing, and after Charley has an encounter with Jerry which leaves him believing that Ed was on to something, Charley does some investigating of his own, sneaking into Jerry's house and discovering secret rooms where Jerry's victims are kept locked up. Charley attempts to rescue one of the victims, only to watch in horror as she explodes on contact with the sun, and now finds himself in the same position as Ed was previously: trying to convince others of an impossible to believe truth.

Neither Amy nor Charley's mom will believe him at first, but once night falls and Jerry comes knocking, his evil nature becomes all too apparent. After escaping the house just before Jerry blows it up - "I don't need an invitation if there's no house" - Charley, Jane, and Amy flee by car and are forced off the road by Jerry, who is then temporarily disabled when Jane impales him with a real estate sign just before passing out from the injuries she's sustained in the car accident. Charley and Amy manage to get her to the hospital, but with Jerry still at large they need to formulate a plan. They receive some help from Peter Vincent (David Tennant), a performer and supposed vampire expert who has a secret history with Jerry, but not before Jerry kidnaps Amy to use her as bait to lure Charley back to his house. Together Charley and a reluctant Peter load up on supplies, including a stake blessed by Saint Michael which will turn all of Jerry's victims back into humans provided either Charley or Peter can get close enough to take Jerry out, which proves to be no easy feat once Jerry unleashes his small army of victims turned vampires.

Lensed by Javier Aguirresarobe, whose work as a cinematographer is as varied as Vicky Cristina Barcelona, The Road and Identity Thief, Fright Night is literally a very dark movie, casting much of its action in an inky blackness which, far removed from the lights of the Vegas strip, makes the isolated suburb seemingly dropped into the middle of the desert seem all the more remote and all the more like a predator's playground. The film's setting - which finds its hero and his friends and family about as far from help as they can be and at Jerry's mercy once night falls - is so perfect for a horror movie that it's surprising that more horror movies haven't been set there. Moreover, aside from the practical advantages of that staging, the setting also taps into anxieties that come ripped from the headlines in recent years. The suburb looks like an oasis of order and civilization, meticulously planned neighborhoods offering a retreat from the terrors of urban life. Yet right in the heart of one of those neighborhoods is a house with secret rooms and women held captive (Jerry has male victims, too, but it's only women who are shown in the sustained and prolonged victim position of being locked up and repeatedly attacked), bringing to mind stories like that of Jaycee Dugard, Elisabeth Fritzl, and the survivors of Ariel Castro, and underscoring the notion that the real danger comes from places that look innocuous and ordinary and that the real monsters sometimes hide in plain sight.

Fright Night works well as a horror movie - the opening scene and the scene in which Jerry chases and attacks Charley, Jane and Amy, only to end up writhing on the ground making inhuman noises, are both particularly effective - but with a screenplay by Marti Noxon (best known, perhaps, as a writer and producer for the Buffy the Vampire Slayer tv series) it also has a strong thread of humor running through it, much of it courtesy of Tennant's leather-clad Criss Angel-inspired performer. In a very dark way, Farrell's performance can often be funny as well, though it is menacing throughout even when Farrell is at his most relaxed and seemingly casual. Like Jude Law, Farrell is an actor with looks and charisma that make him leading-man ready, but who is better suited to character roles that allow him to dig deep and get a bit weird, as those leading man type roles tend to constrict his talent. Here he's given the opportunity to tap into something that is somewhere between animal and human and delivers a performance that is often spellbinding. As the baddie Farrell ends up being Fright Night's greatest asset, but the film has a lot going for it beyond him and as a result it's one of those rare remakes that's actually worth watching.
Posted by Norma Desmond at 8:00 AM

You enjoyed this one far more than I. The setting was great, but aside from that, it felt like a sloppy effort. It should have been much better, but seems to miss all the marks it was going for.

Obviously I disagree, but I can definitely see how this one might be divisive and the sort of movie that you either love or hate.