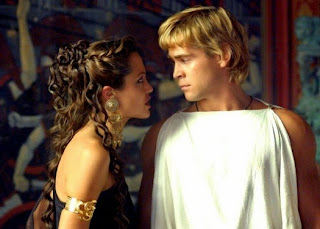 Oliver Stone's Alexander may very well still be a work in progress. Earlier this year Stone released the 206 minute "Ultimate Cut" of the film, which makes for the fourth cut after the 175 minute theatrical version in 2004, the 167 minute "Director's Cut" in 2005, and the 214 minute "The Final: Unrated Cut" in 2007. How all versions stack up against each other is a question I cannot answer, but I can say this: the Director's Cut is a hulking behemoth of a film begging for a solid sense of purpose and repeatedly falling victim to the most typical problems with biopics, namely, telling the audience that a legendary figure is great instead of showing what made him so, and using its time to tick off historical events and names instead of forming a cogent narrative. Alexander is an ambitious film without question but, then again, most cinematic boondoggles are.


The Story
The life of legendary Macedonian King Alexander the Great, one of the most successful military leaders in history and a man whose campaigns of conquest resulted in one of the largest empires in antiquity, doing it all before dying at the age of 32.


The View from 2004
The Good: "All hail Oliver Stone, whose Alexander is a shock: not a campy disaster. And believe me, when you’ve got Angelina Jolie playing Alexander the Great’s mother as a snake-loving harpy, when you’ve cast Val Kilmer as a one-eyed nightmare of a daddy-king, when you’ve dusted off Chariots of Fire’s Vangelis for your conquering-the-world soundtrack music, you are courting disaster, brother." - Ken Tucker, New York Magazine

The Bad: "The film fails, crucially, in getting us inside the head of a man who models himself on myth. Stone repeatedly cuts to Anthony Hopkins as Gen. Ptolemy, who drones on about the Great One's place in history. Hopkins' narration, which plays like a bad DVD commentary, even tells us it's raining when we can see the drops go plop. Shut up, already. Alexander breaks the key rule that makes movies move: Show, don't tell." - Peter Travers, Rolling Stone


The View from 2014
The key problem with Alexander is actually a very simple one, and one that many, many biopics fall victim to: it tries to tell the story of the entire life of its subject and stumbles as it attempts to create a clean narrative line while also touching on all the famous facts and stories from the subject's life. Biographical films which focus on an episode from the subject's life tend to be more successful from a story standpoint than those which want to encapsulate a person's entire life from birth to death and try to fit all the events in between into a streamlined narrative. Alexander the Great may have only lived for 32 years, but those 32 years were packed with major, world-altering events, which means that to cover all of it a filmmaker would either have to sacrifice all complexity surrounding the multitude of events depicted, or create a film of unwatchable length. In the case of Alexander, the attempts to tell everything about Alexander's life result in a film that feels at once over-stuffed and entirely too shallow. It often drifts out of narrative and into dry history lesson, using voice-over narration from Anthony Hopkins (who portrays the older version of Ptolemy, one of Alexander's Generals) to fill in the blanks with facts, and its inability to move beyond the history in order to develop Alexander and other figures from his life as characters results in relationships and motivations that never come to life and become compelling. There are four key relationships for Alexander: the one he has with his mother, the one he has with his father, the one he has with his wife, and the one that he has with his best friend/possible lover. These four relationships, which might have acted as four corners on which Stone could have hung the narrative and created a picture of Alexander the man instead of Alexander the legend, are rendered in the shallowest possible terms so that rather than functioning to tell us something about Alexander, they function to provide quick and easy psychology shorthand to explain Alexander's behavior at any given moment (ie daddy issues, Oedipus complex, etc.).

The facile view of Alexander's personal relationships is particularly bothersome when it comes to Hephaestion, whose depiction is an example of the film's desire to have its cake and eat it, too. Alexander does a lot of suggesting with respect to Alexander and Haphaestion's relationship but it's ultimately too timid to actually follow through on it. Throughout the film characters state how much Haphaestion means to Alexander, but the film itself does nothing to expand on that and give the relationship any semblance of depth, instead consistently choosing to pull away each and every time it might illuminate something about Alexander as a human being. Even when the two men are finally parted with Hephaestion's death - after already enduring considerable strain as a result of Alexander's diplomacy inspired marriage to a woman - the film completely misses the opportunity to make anything out of the relationship. While Alexander turns his back in order to utter a monologue about all the great things he has yet to do and which he wants Haphaestion to witness, his friend dies, an afterthought to the great man's continuing ambitions. What should be a moment of great emotional importance is rendered with extreme emptiness, and this lack is indicative of the general hollowness of the film as a whole.

Another key issue with the film is that the performances are really not scaled to the production. While it's generally lacking in pomp and spectacle, Alexander is still a movie that unfolds on an enormous scale, and the performances within it are mostly pitched towards something more intimate. Only Angelina Jolie, fiery and freely chomping on scenery, brings flashes of life to her character. She drifts into high camp, yes, but that fits better with the epic scale of the story than the quieter and far more serious performances given by the rest of the cast and, in particular, Colin Farrell in the lead role. A film like this demands a Charlton Heston type, an actor whose presence is so commanding that it can mask the emotional thinness of the story, and though Farrell is a good actor, his natural charisma gets suffocated and dwarfed by the size of this production (which, for whatever reason, is what tends to happen to him when he plays typical Hollywood leading man roles). Of course, the ridiculous hair styling doesn't help either.

Alexander is not a film that is entirely without merit - I don't think I've ever seen an Oliver Stone film that didn't have at least one thing to recommend it - but it's a film in which there is no harmony between the various elements. For every wonderfully rendered battle scene, there is a character-driven scene which falls flat because there is no emotional weight to the relationships to act as anchor in the scene. All things told, the film is a wasted opportunity, an ultimately bland and forgettable film with a $155 million price tag. While some critically assailed films benefit from the passage of time and receive a second life via reassessment, Alexander is a film which, if anything, plays worse in 2014 than it did in 2004.
Posted by Norma Desmond at 8:00 AM

This was such an awful film no matter what cut it's in. It was very bloated and had too many things that it wanted to do and ended up with nothing. For me, this was the beginning of Stone's decline as a filmmaker as the films he did afterwards showcased a man losing touch with what made him good in the first place.

Yeah, it doesn't even have the distinction of being "so bad it's good." It's just bad.