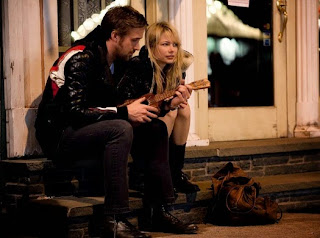 Where does love go? Derek Cianfrance’s Blue Valentine does not attempt to answer that question, but instead offers a frank, sometimes brutal, meditation on the vacuum created once affection spends itself. This is a portrait of a relationship on the precipice, of two people torn apart by their personal disappointments and struggling to keep their heads above water, to keep things together, to find some scrap of happiness that would make it all worthwhile. That description probably makes the film sound harsh and depressing, but while Blue Valentine is definitely a very serious piece, it’s also one that can be surprisingly funny, and one which contains two stellar performances from Ryan Gosling and Michelle Williams. Beautifully crafted and executed, Blue Valentine is an affecting and dramatically rich film that resonates.

Blue Valentine tells a story split into two parts. The first takes place in the narrative’s present day, when the marriage of Dean (Gosling) and Cindy (Williams) is on its last legs and they attempt to save it by going away together for the night, and the second takes place about six years earlier when they meet and fall in love. The courtship is a whirlwind made all the more intense by the extreme circumstances out of which it blossoms and which, in turn, makes it seem all the more romantic. The dissolution is shaped by issues that are present during the courtship, but only slowly undermine the relationship like a structural rot. Dean is a “romantic,” by which I mean that he’s given to big, dramatic, and impulsive displays of emotion, whether it’s the grand gesture of love which cements their relationship, or his instincts towards violence and self-harm when he’s upset. For her part, Cindy is someone who grew up in an abusive household, who sees her mother as someone beaten down and silenced, who is counselled by her grandmother not to end up with someone who has “no regard” for her as a person. When she meets Dean, she’s just coming out of a relationship in which she feels she hasn’t been listened to, and she mistakes his attention for understanding. Unlike her previous boyfriend, Dean doesn’t use her as a means of gratifying himself, but that doesn’t mean that he really sees her; to her ex-boyfriend she’s an object, but to Dean she’s a symbol. He’s a believer in love at first sight and in Cindy he finds the love story he wants to fit himself into.

In the part of the story set in the past, Dean and Cindy fall in love in a way that feels convincing but which also feels like something that they (or, at least, Cindy) are trying to sell themselves on. In the part of the story set in the present, the fact that it’s falling apart is sad but not entirely surprising. Cindy is restless and feels that the path she chose years earlier has left her undermined and held back – she’s a nurse, but she dreamed of going to med school and becoming a doctor; she loves her daughter, but is jealous of the fact that the girl gravitates towards Dean, who behaves less as a parent and more as a playmate. Dean, though he professes that Cindy and their daughter are all he wants, is an unhappy man who starts drinking first thing in the morning and can’t seem to accept Cindy’s support. Cindy believes that he lacks ambition, but what he really seems to lack is confidence. If he didn’t have any ambition, he wouldn’t be so unhappy; it’s because he wants more but is afraid that he can’t hack it, that he would try for something but fail, that makes him unhappy and which prompts him to turn Cindy’s attempts at encouragement around on her to make her feel like her attempt at supporting him is a veiled way of expressing to him that he’s not good enough as he is. Dean won’t try anything because it means that he won’t fail at anything, but what he doesn’t understand is that if it seemed like he wanted more, Cindy might be able to stir herself to want him; because he seems to want nothing, she cannot compel herself to give him anything more of herself.

Blue Valentine is a portrait of disappointment and frustration, emotions which are made all the sharper by the feeling of authenticity that underscores the more hopeful and happier portion of the story. Yet, as hard as the story can be on its characters, it is also a film which has surprising touches of lightness mixed into it as Cianfrance, Williams, and Gosling are able to draw humour out of the story’s darkest passages. At times when Dean and Cindy talking and edging towards a fight, their responses to each other are so passive aggressive, so button pushing and determined to take something innocuous and turn it into the opening salvo in a battle, that you can’t help but chuckle. What makes these moments work is that, while the film itself is aware of the humour in the dialogue, Dean and Cindy are not and Gosling and Williams play it completely straight.

Gosling and Williams, the latter of whom received an Oscar nomination for her performance here, are both magnificent, providing a lived-in feeling to both the characters as individuals and the relationship between them. Though we only see Dean and Cindy at two points in their lives, the film does such a terrific job at drawing them as characters that all those years in between do not feel like they’ve been left blank; we know everything we need to about those intervening years by how things began and how they’re petering to an end, and by who the characters were before and who they are now. Blue Valentine was and remains a terrific character study and a compelling and fascinating film.
Posted by Norma Desmond at 8:00 AM

Great review, one that I completely agree with. It is an endlessly fascinating movie fueled by two terrific performances.

I'm still shocked that Ryan Gosling didn't get an Oscar nomination for this one.