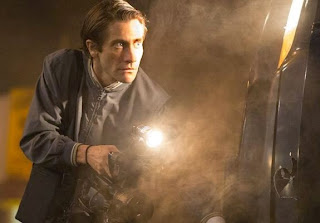 The scariest thing about Nightcrawler's protagonist is not that he commits moral transgressions, but that he seems to lack the ability to recognize them as transgressions at all. To him everything is merely an opportunity to lift himself to the next level of success, as if he learned the motivational/self-help teachings which form the basis of his own speech in a vacuum. Taking the hoary old cliche that "if it bleeds, it leads" (a line actually uttered by a character in the film) to its greatest possible extreme, he is perhaps exactly what our culture deserves for the way that it values sensationalism over substance, and for our seemingly unquenchable hunger for violence. Playing the amoral center of the story, Jake Gyllenhaal delivers his best performance to date, one which is chilling and weirdly, darkly funny, and mesmerizing at every turn, even if the film itself sometimes strains to match it. To be sure, the film is visually slick and confident in a way that not many debuts are, but while Nightcrawler is certainly a "really good" movie, it never quite comes together in such a way as to become a "great" one.

Louis Bloom (Gyllenhaal) is a small time hustler who makes ends meet by stealing materials from construction sites and selling them for scrap. While others see him as a thief, Louis seems to view himself as an eager up-and-comer, bright eyed and prepared to work hard, the kind of guy any employer would be thrilled to hire, though in actuality his intensity is more than a little off-putting. In need of a steady stream of income, Louis lucks out when he happens upon a car accident and discovers that there exists an industry of independent videographers who chase accidents and crime scenes in the hope of selling footage to news stations. Louis buys himself a video camera and hits the road, learning via trial and error until finally lucking onto a scene which allows him to get some graphic footage of a shooting victim which he sells to Nina (Rene Russo), the director of a morning news program who gives Louis the run down on the kinds of things which will be of interest to her in the future: accident and crime scenes located in middle class neighborhoods, preferably with perpetrators that are members of visible minorities so that the program can spin a "danger" narrative about the increasing encroachment of violent minorities into the suburbs. Louis takes her words to heart and uses his payment to hire an assistant, Rick (Riz Ahmed), who has more scruples than Louis does but is too dimwitted to avoid getting tripped up by Louis' constant salesmanship. Together Louis and Rick get better equipment and a better car and begin building Louis' brand, amassing a number of stories aired by Nina's news program, but also gaining negative attention from other "nightcrawlers" and, in particular, Joe Loder (Bill Paxton).

Sensing that competing with Louis will be a losing battle, Joe attempts to bring Louis into his operation, only to have Louis reject his offer. However, another nightcrawler ultimately does accept Joe's offer, allowing Joe's company to be in two places and filming two stories at once, and leaving Louis picking up scraps and trying to sell them to an increasingly unimpressed Nina. In order to regain his standing, Louis begins transcending ethical and legal boundaries wherever he can, tampering with an accident scene so that he can video the victim in more favorable lighting, sabotaging Joe's vehicle, and entering an active crime scene when he and Rick manage to get to it before the police. The crime - a home invasion turned triple murder - is in fact still in process when Louis approaches it and he ends up getting footage of the two perpetrators, as well as their vehicle, as they're making their getaway. After they flee, Louis makes his way into the house, getting footage of each of the victims, including one who is still alive while Louis is filming him, before taking off with Rick so that he can quickly edit his footage and sell it to Nina. The edited footage is without the shots of the gunmen or their getaway, as Louis has a plan to use this evidence to track down the perpetrators in order to stage direct their capture and be the only videographer on scene to film it. However Louis may have bitten off more than he can chew, as the footage that Nina airs quickly draws the attention of the police, who don't buy Louis' claim that he entered the house to see if he "could help" the victims and now have their eye on him - a fact made all the more important due to Rick's growing resentment of Louis and knowledge of what Louis has been doing.

Written and directed by Dan Gilroy, the screenwriter of such films as The Bourne Legacy and The Fall and here making his directorial debut, Nightcrawler is an extremely creepy movie, and not just because there's such dissonance between how Louis comes across and how he thinks he comes across. The film itself often plays into Louis' mindset, particularly through the musical cues (which come courtesy of James Newton Howard), which are disconcertingly upbeat at exactly the moments when Louis' behavior is at its most egregious. This is an effective choice in terms of putting the audience off balance and highlighting just how off kilter Louis' mindset is compared to what's acceptable, yet that lighthearted approach also serves to dismiss Louis as a serious threat. Louis is amoral and both profits from and incites violence, but in the end he's not the "real" villain that we need to be afraid of. Louis is how he is and doesn't even recognize that he's not like everyone else; Nina is well aware that Louis is dangerous but chooses to be in league with him anyway because she knows that she can ride his willingness to cross boundaries to her own triumph. Without Nina, Louis remains a person on the fringes, a creepy guy most people would prefer to dismiss. Because Nina continuously engages with him, she gives him a semblance of legitimacy that in turn allows him to attain the position of power that he occupies by the end of the film. Nina is ultimately Louis' victim (though one might argue that she's truly the victim of her own ambition), but she's also in a sense his creator insofar as she gives him forum and encouragement. Her demand is what inspires his supply to reach such extremes and, really, who's worse: someone (Nina) who knowingly sells their soul to the devil, or someone (Louis) who never had a soul to sell in the first place and knows no better?

Louis is a character divorced from reality as most of us know it, someone who applies the patter of motivational speech to situations where no normal person would do so, such as when he scolds Rick for failing to take initiative at the home invasion by entering the crime scene and exploring it. Having adopted the role of Rick's mentor, Louis frequently breaks into these self-improvement pronouncements, encouraging a forever shellshocked Rick to maximize his potential, which has the effect of taking scenes which are already intense and violent and turning them into scenes of grotesque humor. That this works is due in no small part to Gyllenhaal's performance which is, in a word, excellent. While Gyllenhaal's gaunt appearance is the first thing you notice when the film begins, this is not a performance defined by dramatic weight loss. Instead that physical transformation merely serves to underscore what an alien being the character is, while the rest of the work is accomplished by Gyllenhaal's manner. Louis is an outwardly affable character, but it is apparent that beneath that smile and the positive cadence of his words there lies a tightly coiled intensity and a fount of rage. Yet Gyllenhaal does not play "happy" Louis as a disguise for the "real" Louis. As bizarre and incongruous as Louis is, Gyllenhaal's performance makes it feel like he comes by it naturally, like it's not so much an act as it is one side of a dual personality, the side that Louis has chosen as his public face. Gyllenhaal has been a solid actor for some time and, as he continues to take chances in terms of the roles he accepts, he's fast becoming a great one. As Louis Blum he delivers his best and most interesting performance yet and sets a new standard for his work going forward. It remains to be seen whether this will result in awards coming his way in the months to come, but one thing is certain: he deserves it.
Posted by Norma Desmond at 8:00 AM