Netflix Recommends... Thanks for Sharing (2013) 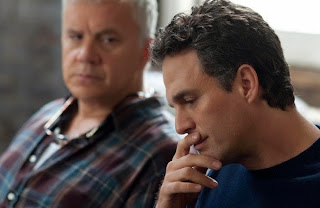 This Netflix recommendation came as a bit of a surprise to me. For one thing, I'd never heard of Thanks for Sharing previously (it premiered at TIFF in 2012 and then had a super limited release last fall), for another the recommendation is apparently entirely random on Netflix's part, and then finally, on reading a description of the plot (which is about sex addicts), I couldn't help but be reminded of Steve McQueen's Shame, which was a fine film but unrelentingly depressing, clinical, and joyless. Thanks for Sharing is sort of the opposite of that film, free of the burden of being a serious art film, yet capable of telling a serious, character-based story, and centering on the ongoing struggle of addiction and recovery, but always aware that there is happiness to be found in life. Thanks for Sharing isn't a "great" film by any stretch, but it's a good one and features really good turns by Mark Ruffalo and Tim Robbins.

Thanks for Sharing is about a few members of a sex addiction support group, including Adam (Ruffalo), who has been in recovery for five years, Adam's sponsor Mike (Robbins), who leads the group, and Neil (Josh Gad), a doctor who has been court ordered to attend the group though he doesn't take the process seriously and doesn't believe he has a problem. Because Neil is so flippant about his problems and his need to change, he earns Mike's ire and frustrates Adam, who has agreed to act as his sponsor. For Adam and Mike, recovery from addiction is an ongoing process that they deal with every day and which has required them to make sacrifices (Adam, for example, knows that he can't have a TV, laptop, or smart phone because having any of those things will start him on a downward spiral), but for Neil the process is a joke and the necessity of his being there is due to other people overreacting and not to his own bad and destructive behavior. When the group gets a new member in the form of Dede (Alecia Moore, better known as Pink), it seems like Neil's overtures of friendship towards her will just be a form of manipulation, however, after Neil loses his job as a result of being caught taking an upskirt video of his boss, he hits his rock bottom. As he starts to take his problems seriously and realize how much he needs help, he also realizes how seriously he should take it when someone else reaches out to him for help and makes a genuine effort to support and help Dede.

As Neil finally faces his demons, Adam must contend with his own issues when Mike begins nudging him to re-enter the dating world. For the entirety of his five years of sobriety Adam has avoided getting romantically involved with anyone, but when he meets Phoebe (Gwyneth Paltrow) he thinks he might be ready to take the plunge - though, crucially, he finds that he can't tell her about his addiction (and, in fact, outright lies to her when she mentions that her last boyfriend was an alcoholic and states that she would never date an addict again). Mike, meanwhile, has a solid relationship with his wife (Joely Richardson) but a broken one with their son, Danny (Patrick Fugit), a drug addict who has been absent from their lives for some time but returns claiming to be sober and wishing to make amends. Distrustful of Danny, and in particular his claim that he's quit drugs cold turkey without the support of any 12 step program, Mike makes things difficult for his son, who in turn pushes back by dredging up the past that Mike would sooner forget. While he hammers at Danny to apologize for the things he did while in the throes of addiction, he refuses to acknowledge that his actions during his own addiction have likely played a part in the development of Danny's addiction and the strain this creates threatens to tear the family apart.

What sets Thanks for Sharing apart from a lot of other movies about addiction is that it does not see recovery as the end. Rather, the recovery phase is merely another beginning and one which must be undertaken on a daily basis, and the film uses characters at different stages in their recovery in order to get that idea across. Neil, obviously, is only just beginning the recovery process. Adam believes that he's fully given himself over to recovery, yet his reluctance to get involved with anyone even after 5 years and then his inability to be truthful with Phoebe until after she discovers the evidence that he attends a 12 step group, betrays how precarious his recovery really is. Mike, who has been in recovery the longest, clings to the 12 steps like gospel but doesn't practice what he preaches as much as he'd like everyone to think judging by how he engages with his wife and son. It's the film's depiction of recovery as an ongoing process that ends up being one of its strongest elements, though the simplistic way that it wraps up the relationships that main characters have with people outside of the group - which basically amounts to "everyone is messed up in their own way" - leaves a little bit to be desired.

As the three main characters, Ruffalo, Gad, and Robbins (where has Tim Robbins been for so long?) all deliver solid performance. Ruffalo is an actor who never gives a bad performance and he manages to do a lot with his character here, portraying him as someone whose outer displays of strength masks deep vulnerabilities, and Gad, an actor I've never particularly warmed to before, is effective as he guides his character from being a super creep to being a decent guy with problems he's trying to get under control. Robbins is particularly great as the slightly hypocritical Mike, but the film's real gem is Moore in the small role as Dede. Though she's the least experienced of the film's actors, she has a natural charisma and a winning ease in front of the camera that makes you wish the film had focused on her character just a little bit more. Like the film itself, her performance is a nice surprise. With just the right mix of comedy and drama, strong characterization, and uniformly good acting, Thanks for Sharing is a film worth seeking out and discovering for yourself.
Posted by Norma Desmond at 8:00 AM