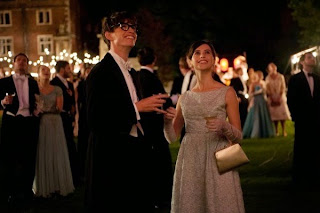 Looks can be deceiving. Going by advertising, James Marsh's The Theory of Everything would appear to be a film about Stephen Hawking's groundbreaking work as a theoretical physicist and cosmologist, accomplished even as a motor neuron disease began to ravage his body; a story, in other words, of a "great man" overcoming adversity. In actuality, Hawking's work is there to provide some context and color, but it's not really the story. This isn't a film about the science, or really the scientist. It's a film about a marriage, told with no small degree of conventionality, but also told with sensitivity and grace. While most films about important men in history relegate their female leads to the thankless position of "woman behind the man," Theory is as much (if not actually more) about Jane Wilde Hawking as it is about Stephen Hawking, and does more than just give glancing attention to the struggles, sacrifices, and private agonies of being the supportive spouse. It's sad that in 2014 that should seem so refreshing, but that should take nothing away from the film which, while flawed, is nevertheless a moving portrait of a man, a woman, and their union.

Based on Jane Wilde Hawking's book Travelling to Infinity: My Life with Stephen, The Theory of Everything begins in 1963 at Cambridge, where Stephen Hawking (Eddie Redmayne) is a doctoral student who has not yet decided on his subject and meets Jane Wilde (Felicity Jones), a student of romance languages who is drawn to him despite the fact that they seem to be opposites. He's a man of science, she's a woman of arts, he is an avowed Atheist, she is a devout Christian, but they quickly form a bond and fall in love and when Stephen is diagnosed with a motor neuron disease and given two years to live, Jane declares her intention to stand by him for however long they have left together. They marry and have their first son and Jane puts her doctoral pursuits on hold as Stephen continues to develop his singularity theorem and his disease reduces his mobility. By the time their second child, a daughter, is born, Stephen is confined to a wheelchair and Jane begins to feel overwhelmed by the demands made on her by two small children and a husband in need of increasing care. She needs help but the couple cannot afford it, so as Stephen continues his work (now trying to disprove the theorem which gained him his PhD), Jane struggles to hold things together and her mother (Emily Watson, wasted in a role that provides her with maybe a half dozen lines) suggests that she join the church choir in order to have something in her life that's just for her. Jane takes her mother's advice and, in doing so, ushers in a new phase in her marriage.

When she joins the choir, Jane meets Jonathan Jones (Charlie Cox), a widower who offers the family whatever assistance they may need and ends up becoming an unofficial member of the family. Jonathan's presence eases the burden on Jane and brings a new sense of happiness to the family, including Stephen, but it also brings its share of complications. Though it remains platonic, the romantic underpinnings of Jane's friendship with Jonathan are apparent from the beginning, and while Stephen tacitly consents to the relationship, it prompts questions from others. When Jane gives birth to her and Stephen's second son, Stephen's mother demands to know whether the boy is really Stephen's child and the tensions that arise from that confrontation drive Jonathan away. In his absence, however, and following a further decline in Stephen's health, a new interloper is introduced into the marriage in the form of Elaine (Maxine Peake), a nurse who quickly becomes devoted to Stephen and leaves Jane feeling increasingly muscled out. As Stephen's fame reaches its apex with Elaine firmly by his side, the marriage approaches its limit.

The Theory of Everything is a film which is very sympathetic to, and told very much from the perspective of, Jane Wilde Hawking. This isn't a bad thing, as not only are her struggles compelling, but because it's so rare for biographical films about famous men to develop the female half of the relationship as much as this one does. While some viewers will no doubt find it frustrating that the film focuses so little on Hawking's work, I found the story's depiction of the relationship between Stephen and Jane, and its development of both as characters, to be quite moving. Neither is perfect but neither is portrayed as a "villain," either. That said, while the film is very tactful regarding the relationship that develops between Jane and Jonathan, representing it as a sort of idealized, pure, and selfless love and portraying Jonathan as, in a sense, the savior of Jane's sanity, Elaine emerges as a much darker figure. This makes sense, of course, considering the source material, but it's odd nevertheless the way that the film aligns itself in order to endorse a happy ending for Jane with the man who would, in real life, become her second husband, while portraying the woman who would become Stephen's second wife as quietly calculating and actively seeking to supplant Jane.

As written by Anthony McCarten, The Theory of Everything is a film which follows a fair number of the familiar beats of the biopic genre. It is, as I said, conventional, though it also has a great deal more humor than you might expect. What ultimately elevates it is the acting and James Marsh's direction, which develops visual motifs that continuously refer to Hawking's work and which play up the opposites attract angle between Stephen and Jane (characterized visually as the contrast between light and dark), in addition to framing the characters at various points in order to underscore the intensity of their feelings of isolation (for Stephen it is when he is first diagnosed and believes his life is nearly over, for Jane it is when she begins to feel overwhelmed by the sheer amount of responsibility she's taken on). Regarding the actors, Redmayne is given a character which might be called "flashy" insofar as it requires a lot of what you might call overt acting, but it's the subtleties of his portrayal and the way that he descends so deeply into the character that stands out and makes the performance feel so seamless. Redmayne is Stephen Hawking in this film and his performance is astonishing. So, too, is the performance by Jones whose Jane is a stronger than she might at first appear, but certainly not superhuman. It's a sensitive performance with depths which might not, at first, be apparent but which ultimately resonate. The Theory of Everything, though a good one, will not be one of the year's best films, but Redmayne and Jones have certainly staked their claims for the year's best performances.
Posted by Norma Desmond at 8:00 AM