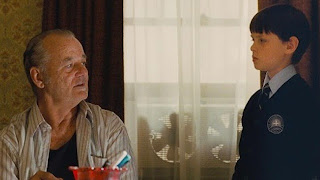 Ten years ago, St. Vincent would have starred Jack Nicholson and become another notch in his series of "curmudgeon with a heart of gold" movies. Nicholson's loss (and apparently he actually was signed to the film at one point) is ultimately Bill Murray's gain, giving him a great character to play, even if the film itself is a bit messy, stacking subplots on top of each other until it seems like the narrative might collapse under the weight. Nevertheless, I enjoyed St. Vincent quite a bit. Sure, the movie is a veritable grab bag of familiar storylines and character beats thrown together, and it is deeply sentimental, but it has charm enough that you feel inclined to forgive it for its more formulaic elements and just enjoy it for what it is.

Murray stars as Vincent MacKenna, an alcoholic war vet whose crippling gambling problem is on the verge of finally catching up with him, and whose only friend (I term I use loosely) seems to be Daka (Naomi Watts), a heavily pregnant stripper and prostitute. This changes when a single mother, Maggie (Melissa McCarthy), moves in next door with her 12-year-old son, Oliver (Jaeden Lieberher), and Vincent takes on babysitting duties because he needs the money and Maggie has no other alternatives. Oliver, who is bullied at school due to his slight frame and the fact that he's new, learns how to fight from Vincent (specifically how to break someone's nose) and wastes little time in using that newfound ability to stand up to his most frequent tormentor. Maggie is angry when she finds out, though hand-to-hand combat is arguably the least objectionable thing that Oliver is exposed to while in Vincent's care, as Vincent also teaches him how to gamble at the track (where a man played by Terrence Howard keeps a close eye on him, as Vincent owes him a large sum of money) and takes him to the bar that he frequents, where he proceeds to get into a drunken confrontation with the bar tender and then pass out in the cab on the way home. After Maggie's ex-husband takes her to court and the full truth about what Oliver has been up to with Vincent comes out, she informs Vincent that his services are no longer needed.

Vincent, meanwhile, has bigger problems than losing his young companion. His money troubles have grown dire, as his gambling associates are making demands for payment of what Vincent owes, he's taken on the responsibility of helping Daka who is now too pregnant to work in her industry, and he's far behind on payments to the nursing home where his wife, who suffers from dementia, is residing. Needing to make some money fast, Vincent steals some prescription pills and tries to sell them with Daka's help, and then uses all the cash he can get hold of to place a bet at the track in the hopes of a miracle that will solve all his woes (a plan which plays out in about the exact way one would expect). Things are already bad for Vincent, and then he's leveled by a medical emergency which upends his life, but may also improve it. Debilitated by his condition, Vincent's sudden vulnerability allows the people in his life to see past his rough edges towards the decent but broken man underneath, and come together to help him rally and heal.

Helmed by Theodore Melfi, making his debut, St. Vincent is a film with few surprises but which is relaxed in its storytelling. A lot of the plot points are fairly standard for films of this type, but the film isn't really trying to reinvent the wheel. It's comfortable being exactly the kind of story that it is, and though that means that it isn't a particularly ambitious project, it does manage to achieve exactly what it sets out to do, which is to make you laugh and to tug your heart strings. Advertising for the film has given the impression that it's a comedy but, while it is often funny, it also leans more heavily towards drama as the story progresses. Melfi handles the transitions between the two modes well (even if it does get just a little bit draggy as it hits the home stretch into the finale) and trusts the actors to do their thing and bring some freshness to the well-worn beats. McCarthy, quiet and understated after going broad for several films, doesn't really get a lot to do aside from an exposition dump of a scene which lays out her and Oliver's backstory, but her presence is pretty much always welcome, and Watts, best known for her work in drama, demonstrates that she's a surprisingly adept physical comedian (though the "moose and squirrel" style accent will be a deal breaker for some).

In the end, though, St. Vincent comes down to Murray, who delivers another of the fine character performances that he's been turning in since Rushmore, his first collaboration with Wes Anderson, ushered in a Renaissance in his career. Vincent is a man with many demons, and Murray brings a weary, lived-in quality to all of them (the scene in which Vincent gambles big and loses plays out like something that Vincent has experienced before, only this time he has to contend not only with the gut punch of leaving worse off than he was when he arrived, but also with the knowledge that he's betrayed the only person who loved him unconditionally) that brings dimension to Vincent's sourness and believability to the inevitable revelations designed to soften the character's sharper edges. Vincent ends up being kind of lovable because Murray is an inherently lovable actor and because his performances are always so unforced. Towards the end the film begins stacking the deck in terms of getting the audience to like Vincent, but Murray's performance is never cloying, never begging to be liked. In Murray's hands Vincent just is who he is, take it or leave it, love him or hate him (or both all at once), and he's great.
Posted by Norma Desmond at 8:00 AM