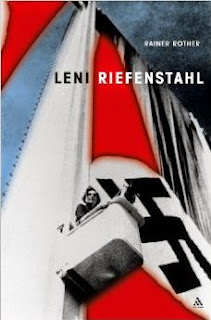 Leni Riefenstahl is one of the most controversial filmmakers of all time, if not the most controversial. Because of the circumstances under which she made her most famous films, and because of her almost sociopathic refusal (or inability) to acknowledge any level of wrongdoing by making propaganda for one of history's most famous villains, any assessment of her work naturally invites a host of other questions: can art be separated from the artist? Can a film be considered "good" even if its subject matter and intent is evil? Is it possible to actively work with a dictatorship while remaining "unpolitical"? Beyond film specific questions, discussion of Riefenstahl also invites broader questions about the act of passive collaboration, levels of guilt, and the appropriate ways to engage with those who have collaborated, either actively or passively, with a dictatorship in the aftermath of that dictatorship's end. Riefenstahl is a complex figure, nearly impossible to consider on her own, which is why it's all the more impressive that author Rainer Rother manages to pack such a detailed and thorough accounting of her life and career into such a slim volume. The Seduction of Genius is a great book about a troubling figure which charts both the evolution of Riefenstahl the woman, and the evolution of her public image.

Rother's accounting is divided into three parts, though they are perhaps best described as "acts" - the rise ("Part One: The Talent"), the glory ("Part Two: The Genius of Nazi Filmmaking"), and the fall ("Part Three: Deprived of Power"). In doing so, Rother must contend with, and sometimes dismantle, Rifenstahl's self-mythology, which more often than not cast her as the underdog who succeeded against all odds and as a result of her powerful will to make it happen as well as her inherent genius at whatever she was trying her hand at (Riefenstahl is best known as a film director, but she was also a dancer, an actress, and in later life a photographer). Rother also has to confront Riefenstahl's "loose" relationship with the truth, as he does, for example, in a passage related to Riefenstahl's recollection (in her autobiography) of her first dance performance:


To give the impression of unqualified praise, however, she has to resort to some creative quoting. Not only did the newspaper article she used actually relate to her second performance (in December 1923), she also misrepresented the tone of the piece. The critic did indeed remark on the 'large and grateful audience,' and praised the young artist because this time she subordinated 'her eagerness to her ability.' Nevertheless, he regarded Leni Riefenstahl as 'nothing less than problematic'... The young dancer doubtless sent the publicity brochure (containing press reactions up to 29 April 1924) to theatres and journalists when she was preparing a comeback after her injury. Understandably, it omitted negative opinions and even nuances. It is striking, however, that the memoirs should, so many years later, employ the same strategy.

The most consistent image of Riefenstahl that emerges from the book is of a woman who has taken great pains to construct a positive story about herself and then stuck to it even when confronted with evidence that contradicted some aspect of her version of events. This is especially true during Part Three when Rother explores Riefenstahl's post-war life and career, which is defined in part by her frequent refusals to consider that by making films which deified Hitler and his vision she bears some responsibility for what his regime did. Yet, despite her refusal to accept any share of guilt (or even, seemingly, her inability to understand why anyone would think she should), she fought court battles in order to claim ownership of Olympia, her film about the 1934 Olympics, and Triumph of the Will, her famous Nazi party rally film, so that she could profit from them. In other words, she wanted credit for the films and financial compensation from any re-release or screening, but was unwilling to take responsibility for any of the consequences arising from the creation of the films and, in fact, at times claimed that her films were made without the help of the Nazi regime and were entirely unpolitical.

The films that Riefenstahl made during the Nazi period certainly were political - the rally films obviously so, Olympia in the way that its aesthetic fed into and fetishized Nazi ideals regarding the human body, Tiefland because, while its content is not "politcal" per se, it benefited from the political situation of the day in that some of the extras in the film were on loan from a nearby concentration camp - but, the thing is, it's entirely beliveable that Riefenstahl herself was unpolitical. While Riefenstahl steadfastly refused to answer questions regarding why she chose to make films for the Nazis, the answer is obvious and astonishingly simple: Hitler put a wealth of resources (including a studio that was being built to her own specifications) at her disposal that she couldn't have gotten anywhere else. Had the Soviets offered her the same deal, she probably would have made propaganda for them; had any Hollywood studio offered her a similar deal, she probably would have made films there. She had no political affiliation; her affiliation was entirely to herself and to her own ambition and she was blind to everything around that. The "why" of it really isn't a mystery and neither, on reflection, is the "how could you" of it. Riefenstahl was a narcissist without a moral compass. The fact that she couldn't understand why some people thought she ought to be punished in some way for her actions during the Nazi regime and that her version of events always cast her as the victim demonstrates as much.

Yet, while the book doesn't let Riefenstahl off the hook for her amoral approach to gaining success, Rother does acknowledge that Riefenstahl paid a disproportionately high price for her transgressions as compared to other artists who made propaganda for the Nazis. He compares her situation to that of Veit Harlan, who made the notoriously anti-semitic film Jud Suss and, unlike Riefenstahl, was able to continue his directorial career after the war. Rother states:


[Riefenstahl] did not have to invent a story, as Harlan did, but rather to distil one. She honed the events (such as the Party Rallies or Olympic Games) and stylized the way they were staged in order to popularize their undoubtedly ideological purpose... Her personal contribution to Nazi propaganda was thus confined to stylizing it for the cinema, whereas Harlan formulated the political message himself. Harlan's relationship with his films was unambiguous. He was the scriptwriter and the director, he depicted his ideas. He treated 'Jud Suss' as a character, a figure of his own creation, not just as his actor... [Riefenstahl] did not invent [Hitler]. The difference may seem a minimal one: after all, both directors were producing Nazi propaganda. It is worth noting, however, that Riefenstahl did not use her skills to make inflammatory films dressed up as genre.


But Rother also notes that while sexism played some role in Riefenstahl's post-war treatment*, it was her inability to understand why people would expect her to feel bad about what she did during the war that ultimately torpedoed any chance she might have had at a post-war film career. From Riefenstahl's perspective, she did what anyone would have done in her situation - she wanted to make movies and when offered the opportunity to do so with the benefit of nearly unlimited resources, she took it - and she simply could not understand that for many people (hopefully "most people") getting what you want by aligning yourself with a blood thirsty despot would simply be too high a price to pay. She saw herself as having nothing to apologize for and that attitude, which remained unshaken right to the end, made her too problematic to engage with for any really serious purpose.

Riefenstahl is a fascinating and frustrating figure and Rother does an excellent job examining, and trying to reconcile, her complex public image with her bafflingly simple person. The Seduction of Genius is as much a biography of Riefenstahl as it is an academic assessment of how different eras, and different political climates contained in one era (for example, the differing views of her and her work in West and East Germany), have embraced and rejected her. The Seduction of Genius is a great read that takes a more or less even-handed look at its subject in an effort to explain how she was seduced by the Nazis, and how she in turn seduced audiences.

* The Seduction of Genius doesn't really get into it, but I would argue that the fact that Riefenstahl was the only truly "successful" Nazi filmmaker (by which I mean that her films achieved some degree of success outside of Nazi Germany, with Olympia winning Best Film at the Venice Film Festival, and Triumph of the Will going on to become one of the most visually quoted films ever made) played a pretty large role in her becoming the enduring "face" of Nazi filmmaking. She's the one people know because she's the only one worth remembering.
Posted by Norma Desmond at 8:00 AM