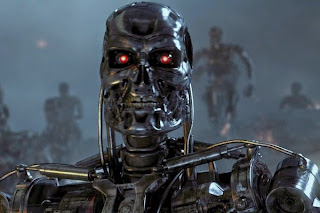 At the moment, the Terminator series is one that is evenly divided. Two of the films are really good, and two of them are really... not good. In July 2015 a fifth film will join the series and, at the risk of pre-judging a movie by its title, I'm going to go out on a limb and predict that Terminator: Genisys will tip the series into being predominantly made up of films that are terrible. I get why the studio wants to keep returning to this particular well. It's a premise and a mythology that should work across multiple films, but having recently marathoned all four movies, I've come to the following conclusions: Terminator doesn't work like it should without James Cameron, without Linda Hamilton, without younger Arnold Schwartzeneger, and the more it focuses on John Connor. John Connor is an effective mythology figure, but as a character he suuuuuuucks. In every incarnation. Good luck, Jason Clarke.

The Terminator saga begins in 1984, when a T-800 Terminator model (Schwartzenegger) is sent back in time from 2029 in order to kill Sarah Connor (Linda Hamilton) and prevent her from giving birth to John Connor, who will one day lead the human resistance against Skynet, and Kyle Rees (Michael Biehn), a resistance fighter, is sent back by John Connor in order to protect his mother. Kyle succeeds in his mission and is ultimately killed in the process, but not before conceiving a child with Sarah who will, of course, become John. 11 years later, Sarah is locked up in a mental institution for her efforts to prevent the coming apocalypse and John (Edward Furlong) is in foster care. Once again the T-800 is sent back in time, only now to protect John, while a new model Terminator, the liquid metal T-1000 (Robert Patrick), is sent to kill John. After first trying to defeat Skynet by assassinating its unwitting creator, Miles Dyson (Joe Morton), Sarah agrees to instead let Miles help destroy Skynet before it becomes self-aware and launches the nuclear holocaust that will wipe out half of humanity. After succeeding in the elimination of Skynet and defeating the T-1000, the T-800 destroys itself and Sarah and John look towards the future with hope.

By the time the series catches up with the Connors in 2004, Sarah has died of leukemia, and John (Nick Stahl) is living off the grid. Judgement Day has come and gone and John believes that the war between humans and machines have been averted, but in fact it has only been delayed. Unable to locate John, Skynet sends its new T-X (Kristanna Loken) back to kill other key members of the resistance, including Kate (Claire Danes), who will become John's wife. A T-850 (Schwartzenegger) is sent back to protect John and Kate by taking them to Mexico before the new Judgment Day occurs. Though John and Kate attempt to prevent the nuclear holocaust by making their way to what John believes is Skynet's core, their efforts come to naught as the location turns out to be a fallout shelter and they realize that they were never meant to prevent the holocaust, but merely to survive it. As a result, they are still alive in 2018 (and now played by Christian Bale and Bryce Dallas Howard) when the war is well under way. After Kyle (Anton Yelchin) is taken prisoner by the machines, John reluctantly teams up with human-cyborg hybrid Marcus (Sam Worthington), who was a death row inmate in 2003 and donated his body to science, allowing Skynet to turn him into a new type of Terminator. Marcus, who believes himself to be human, struggles with his identity but ultimately proves his inherent humanity by sacrificing himself to save John so that he can lead the resistance in its continuing war against the machines.

The Terminator: Though the special effects haven't really aged well (and, my God, the hair in this movie), The Terminator remains a highly entertaining science fiction action movie. Schwartzeneger, an actor of limited range, finds his ideal role as the Terminator, which isn't the backhanded compliment that it may at first seem to be. Cold, clinical, and relentless, the Terminator is meant to behave "robotically," but that doesn't mean that Schwartzeneger is doing "nothing" in the role. To so completely remove any evidence of your humanity is, no doubt, a difficult task and Schwartzeneger manages to do it without ever faltering. As Sarah, Hamilton delivers an effective "origin" performance insofar as, while Sarah is not the very capable soldier that she is in the follow-up, she manages to get the feeling across that Sarah feels and accepts the weight of the crucial role that she will play in the future and that, having been baptized by fire, she will be able to carry on in Kyle's absence and do what needs to be done.

Terminator 2: Judgment Day: Released 7 years after the original, Terminator 2 builds on what the first film did by using its first act to, essentially, recreate it. By design, the opening section of Terminator 2 is meant to be ambiguous and to lead the audience to assume that the T-800 is once again the assassin and that the other figure sent back from the future will be the Connors' protector. That the T-1000 is disguised as a police officer is meant to reinforce this notion, and the fact that he turns out to be the bad guy allows the film to accidentally tap into anxieties that would have been at the forefront of a lot of people's minds in 1991 (the film was released only 4 months after Rodney King's beating at the hands of the LAPD). In 1984, the police in the first film were well-meaning but ultimately useless; here the police are the enemy. Thematically, Terminator 2 ends up being much richer than the original, while Hamilton's Sarah emerges as a much more physical and active character, and Schwartzeneger gets to add touches of humor to his performance (though some might count this as a demerit, as the T-800's relationship with John makes him seem almost "cuddly" at times). The practical effects that James Cameron uses in the film are excellent even when viewed from the perspective of 2014 and though the film ultimately betrays the rules established in the first film (the T-1000 should not be able to go back in time, for example), it still manages to deepen the story's mythology in satisfying ways. Furlong is not great in the role of John, but I give him a pass since he was only 12 when the movie was made and because no John Connor has really been satisfactory, which leads me to believe that the problem is really with the character.

Terminator 3: Rise of the Machines: There are three moments, all of them early in the film, which taken together account for how Terminator 3 lost me. The first: the T-X emerges from her time travel journey and then walks out into the street and kills a woman for her clothes... despite the fact that the T-X literally lands inside a women's clothing store. The second: the T-X gets pulled over by the police while driving and responds by inflating her chest. The third: the T-800's first stop after time traveling is a strip club where he takes the clothes a super effeminate male stripper and then emerges from the club and puts on a pair of Elton John-esque sunglasses. Terminator 3 is so ridiculous it almost functions as a parody of the first two movies. As John, Nick Stahl doesn't really add much to the character, which may be the fault of the film as much as the actor. John hardly seems to have evolved from where he was at the end of Terminator 2 despite it being 9 years later and despite what he went through in the previous film and the fact that he's supposedly been living off the grid in the interim. You wouldn't expect the John of 2004 to be the battled hardened legend of the future, but you'd think he'd be just a bit more savvy and competent.

Terminator Salvation: The fourth entry really isn't much better than the third. For one thing, it mistakes a dark gray color palette for emotional weightiness, and for another it still hasn't solved the John Connor problem. Set during the period of the war with the machines, and featuring a celebrated actor in the role, this should be John Connor's film. Certainly, the advertising sold it that way. Yet John is the least interesting character in the film and, in fact, the film itself really isn't that interested in him anyway, tossing the bulk of its attention to Sam Worthington's Marcus, the man who discovers that he's been turned into a robot. I can see ways that this story could have worked since, after all, the character's crisis of identity has an inherently emotional core and is rooted in deeply philosophical questions, but Worthington is such a void of charisma that making him the center of the story just lends it a flatness that it doesn't need. The effects work in the film is fine, though the wall to wall CGI here doesn't really stand out from the look and feel of pretty much every other action movie to be released in the last dozen or so years, which makes Salvation seem like nothing particularly special.

As I said at the top, I don't really have high hopes for Terminator: Genisys, which is basically going to completely reboot the series by having John Connor (Jason Clarke) send Kyle Rees (Jai Courtney) back in time to save Sarah (Emilia Clarke), who in this version of events has been raised since childhood by a Terminator (Schwartzeneger). I mean... I genuinely hate everything about that, though perhaps the film will ultimately benefit from lowered expectations.

Nice write-up. I have to disagree on T3, though. I actually like that one even though I realize I'm one of the few. For me, it's...

My preference for Salvation over Rise of the Machines was only marginal.