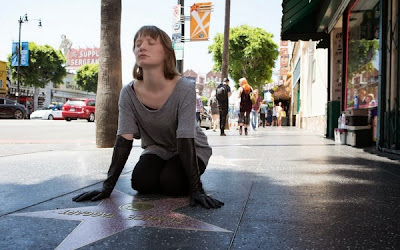 For me, Maps to the Stars is a bit of return to form for David Cronenberg, whose last two films - the decent, but kind of bloodless A Dangerous Method, and the ambitious but dull Cosmopolis - didn't really do much for me. A bit messy, tonally inconsistent, full of "unlikeable" characters, and centering on subject matter that can most generously be described as "uncomfortable," Maps is certain to have its detractors, but I enjoyed it for its dark comedy, its scathing view of celebrity, and its terrific performances. That said, after this film and Interstellar it will be some time before I need to see another film which finds it necessary to have its characters repeat one section of one poem over and over and over again.

Maps is about a handful of interconnected characters, beginning with Agatha Weiss (Mia Wasikowska), a young woman with burn scars who arrives in Los Angeles by bus and is immediately disappointed when the stretch limo she requested is nowhere to be found. Instead she's got a luxury car driven by Jerome (Robert Pattinson), an aspiring actor and screenwriter, who at her request takes her to a vacant lot which she informs him was once the home of child star Benjie Weiss (Evan Bird). Though she makes no secret of her surname, Jerome doesn't seem to make the connection, but given that she also tells him that she's come to Hollywood from Florida because she developed a friendship with Carrie Fisher over Twitter and is now going to be helping her with research for a book, he probably just thinks that she's crazy. What she tells him, however, turns out to be true: she really did meet Carrie Fisher (playing herself in the film) over Twitter and shortly after her arrival in Los Angeles Carrie helps get her a job as a personal assistant to Havana Segrand (Julianne Moore), a fading movie star desperate to restart her career by getting a role in the remake of the cult film which made her mother, Clarice (Sarah Gadon), an icon. While the director and producers of the remake are reluctant to cast Havana, wary of being accused of "stunt casting" ("All casting is stung casting!" Havana moans to her agent), Havana's fortunes begin to change once Agatha - whose burn scars remind Havana of Clarice, who died in a fire - comes into her life.

Havana and Agatha have further connections that Havana does not suspect. Agatha is the sister of Benjie Weiss, who is currently struggling with addiction issues and strange visions, and their father, Stafford Weiss (John Cusack) is Havana's therapist, who performs a sort of massage therapy on Havana in an effort to help her deal with the abuse she suffered as a child at the hands of her mother. Agatha has not seen her family, which also includes mother Cristina (Olivia Williams), in years, having spent her adolescence confined to a mental hospital as a result of having set fire to the family home. While Havana remains in ignorance of Agatha's true identity, Stafford immediately figures out that the new assistant Havana has been telling him about is Agatha and he and Cristina begin strategizing to keep Agatha away from Benjie and, more importantly (at least to Stafford's mind, as he has a book that's about to be released), to keep the tabloids from getting wind of the family's dark secrets, which would destroy the cash cow that is Benjie's career. But even if they succeed at keeping the truth hidden, they are nevertheless doomed as, just like Mulholland Drive before it, Maps' depiction of Hollywood is not a place where dreams come true, but a nightmare city that devours souls.

While the circularity of the relationships - Agatha knows Carrie, who is friends with Havana, who is a patient of Stafford, who is the father of Agatha - may seem like it would require some suspension of disbelief, Maps to the Stars tells a story which is all about incest, both literally and metaphorically. Hollywood, as depicted here, is a place where everyone is connected to everyone else, either directly or because they have a contact (or lover) in common, so there is a distinctly "in house" feeling to every relationship that develops. On the literal side, Havana is haunted by the sexual abuse she says she suffered at the hands of her mother, while Agatha's family is like one borne from Greek tragedy. In therapy Benjie describes Agatha as having been obsessed with him and having performed a mock marriage ceremony for them the night that she set fire to the house. From that perspective Stafford and Cristine's actions in terms of trying to keep Agatha away might seem understandable, however, as the film peels back the layers to expose the motivations for Agatha's actions, they seem inspired less by any kind of sexual predation than by a desire to close the loop begun generations back within the family by symbolically recreating her parents' marriage.

I've only seen Maps to the Stars once at this point and I think it would require at least a second viewing in order to fully get a handle on all that's going on beneath what's going on. I'm certain, for example, that I'm not totally grasping the connection between the Weiss family and Havana's family, as parallels between the two crop up continuously. Benjie has visions of dead children, one of whom he once visited in a hospital as part of a Make A Wish type deal, and Agatha later reveals that she, too, had such visions, while Havana is haunted by visions of Clarice, who taunts her about her claims of abuse. One of the scenes from Clarice's film shows her screaming and being restrained by several orderlies at what appears to be a mental institution, while Agatha herself has been recently released from a mental institution. Clarice died in a fire (and there seems to be some implication that Havana may have set it), while Agatha was burned in a fire and nearly killed the rest of her family at the same time. Throughout the film Agatha repeats the same section of a poem that is recited by Clarice in her film. Agatha is driven by a desire to recreate her parent's wedding, which she sees as a sort of ground zero for the problems that plague her and Benjie, while Havana wants desperately to play her mother's role in the remake of the film.

There's more, I'm sure, but I'll need to see the film again to really get at it and in the case of Maps to the Stars, the prospect of needing multiple viewings is something I welcome. Maps is a puzzle looking to be solved, but it's also a deeply entertaining movie, half hilarious and half horrifying. Moore, playing a Lindsay Lohan-esque star who pouts like an overgrown child when she doesn't get her way and, in one scene, grotesquely celebrates the awful misfortune of a rival for a role, is simply marvelous here, fearlessly throwing herself into the role of a woman with few (if any) redeeming qualities. All of the major female performances are great, really, from Wasikowska's Agatha, who in any given scene may seem like the ultimate victim or the hunter closing in on her prey, to Williams' Cristina, whose attempts to control her son's career merely mask how out of control her life really is and how close she's been to tipping over the edge, to Gadon as the venomous Clarice. On the male side, Cusack, who has long since entered the phase in his career where he doesn't necessarily always show up in his performances, is solid here as the pathologically selfish Stafford, and Pattinson continues to prove that he deserves a post-Twilight career, delivering a performance which is impressive for just how low key and natural it feels. And, of course, behind all these performances is Cronenberg himself, whose guiding hand may not always keep Maps to the Stars from becoming a bit unwieldy, but who nevertheless manages to shape the material into a terrific film.
Posted by Norma Desmond at 8:00 AM